There’d barely be a player who wouldn’t swap their footy CV with Jack Riewoldt.

Ahead of game 300 on Friday night, Jack has three Coleman Medals, is a three-time All-Australian and two-time best and fairest winner. Most importantly, he’s got three flags to go with it.

What’s impressed me most about Jack is his evolution from stay-at-home full-forward to a team-first player who makes those around him better.

Without that evolution Richmond wouldn’t have won that breakthrough premiership in 2017. He was basically the Tigers’ lone key target and was rarely beaten in the contest. If he didn’t mark the footy, he made sure it came to ground, which suited the Tigers’ territory game perfectly.

Last week Jack also booted his 700th goal, ensuring he’s got cousin Nick’s mark of 717 majors in his sights. So where does he sit among the best forwards of the modern game?

It’s a difficult task for so many reasons, not least because the game has changed so much in recent years. While forwards now get far more protection from the umpires – holding free kicks, chopping the arm and so on – the era of zones and team defence makes their job harder in other ways.

For argument’s sake, I’m focusing on the year 2000 onwards. There are some guys, like David Neitz and Fraser Gehrig, who didn’t quite meet the 10-year threshold I’ve put in place (10-year careers since the turn of the century). Others, like Barry Hall and Eagle Josh Kennedy, are desperately unlucky to miss out, but there simply wasn’t room for them in my top-10.

As you’ll see, I’ve weighted heavily the importance of centre half-forwards over out-and-out full forwards, because of their ability to influence the game without the need for great service. While premierships are the ultimate goal, they don’t have any bearing on where these guys are ranked. So, here goes.

10. Brendan Fevola
An old-fashioned full forward, ‘Fev’ booted 623 goals from 204 games in a career that was ultimately cut short when he left Brisbane. A three-time All-Australian and two-time Coleman medallist, I rate Fev as one of the purest shots for goal I’ve seen – equal to the likes of Tony Lockett and Matthew Lloyd. On top of that he put bums on seats.

9. Tom Hawkins
While Tom has 640 goals from 293 games, it’s not so much his goalkicking record which has ensured I rate him so highly, but his team-oriented nature and selflessness. He’s one of those rare players who’s seemed to have got better post-30, resulting in his maiden Coleman Medal and third All-Australian blazer last year. A dominant figure, both one-on-one and in the ruck, I just enjoy watching him play.

8. Matthew Lloyd
Since 2000, Lloyd has been the best out-and-out full forward. That’s not to say he couldn’t work up the ground, but he was most damaging closer to goal. Super quick off the mark, with great hands, Lloyd was a beautiful shot for goal. It wasn’t textbook – given he kicked with a bent leg – but he was incredibly accurate. His 926 goals, five All-Australians and three Coleman Medals are all testament to that. 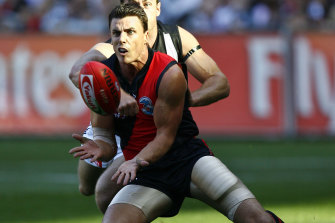 7. Jack Riewoldt
Jack gets his ranking because of his evolution from a Coleman Medal winning full-forward to the well-rounded team man he’s become. The fact he got my next selection shifted to a wing later in his career says something about the talent the Tigers knew they had on their hands when they drafted him out of Tasmania.

6. Matthew Richardson
Given he played so much good footy in the ’90s, ‘Richo’ was right on the cusp in terms of eligibility, but I simply couldn’t leave him out. He’s been the best contested mark I’ve seen in this timeframe. Since stats were taken, he’s taken more contested marks than anyone (506) at a better average than anyone (2.77 a game). His athleticism was incredible and while there were knocks on his kicking, Richo still managed 800 goals across his career despite working up the ground and finishing on a wing. The fact he reached that mark in what was generally a pretty average Richmond team also speak volumes to his talent. 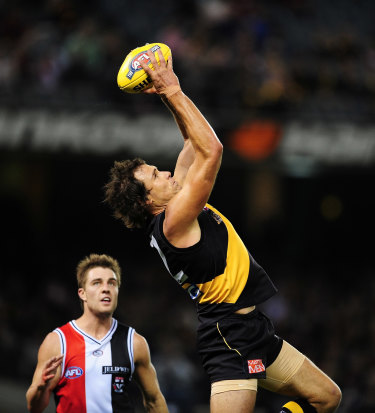 5. Warren Tredrea
Being a South Australian, Tredrea flies under the radar a bit in these types of conversations. But for a period of five or six years he was probably the most dominant and consistent centre half-forward in the game. He was named All-Australian for four straight years between 2001-2004 at a time Brisbane’s three-peat team also had some pretty handy forwards. Tredrea was a great mark, but what set him apart was his creativity. He was so skilled on his non-preferred left-side that he could swing either way to setup the play. He finished with 549 goals from 255 games.

4. Matthew Pavlich
A six-time All-Australian and six-time best and fairest winner, Pavlich could play just about anywhere. He could switch between centre half-forward and ruck-rover ensuring he could inject himself into any game. For his size he had a certain elegance about him, without necessarily having the power of some others. But ultimately Pavlich was just a class player. He reached the 700 goal-mark in his 353rd and final game. 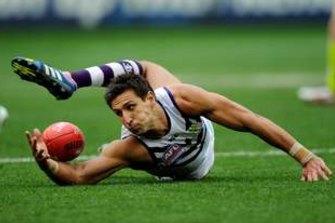 3. Jonathan Brown
At his best, Brown was as good – if not better – than any of these guys. His combination of presence, power and courage is why he remains one of my all-time favourites. An incredible pack mark and big game performer, Brown booted 594 goals from 256 games and was a key part of that famous Brisbane side of the early 2000s. He ‘only’ has two All-Australians to his name, but I think Brown missed out on more individual accolades because the way he played often meant he didn’t manage a full season.

2. Nick Riewoldt
Splitting Riewoldt and Brown was one of my most difficult decisions. A few years ago, I had Brown ahead but, breaking it all down, Nick gets the nod at number two because of his longevity and ruthless consistency. He managed to get himself up game after game. Despite having some very polished team-mates Riewoldt won six best and fairests at St Kilda and is a six-time All-Australian. All of these players have decent tanks, but his running power was unmatched. Despite playing further up the ground Riewoldt still managed 717 goals from his 336 games.

1. Lance Franklin
It’s difficult to sum up his greatness in just a few paragraphs but, for me, Buddy is a clear number one. While he’s a four-time Coleman Medallist and eight-time All-Australian he’s never been your traditional full forward. Franklin is comfortably the weakest mark of this group, but he’s still the most dangerous because of his ability once the ball hits the ground. What has made him so good has been his explosiveness. He can do things other people can’t. The length of his kicking has also been an asset – not just for goal, but also with his field kicking. He’s a ‘box office’ player, and might be the last player we see reach 1000 goals (as it stands, he’s got 23 to go). And the best part about Buddy is, like Hawkins and Jack Riewoldt, we get to see him strut his stuff for a little while longer. 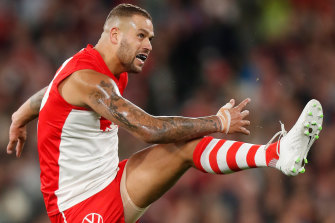 Related posts:
Previous Post: Hunt says party-going teammates ‘can say sorry all they want’ and now need to step up
Next Post: Man Utd close in on Varane as Chelsea ‘bid for Haaland’ – your transfer questions answered