Melbourne star Angus Brayshaw is on track for selection in round one after getting through his first competitive hit-out for the year unscathed in a practice match against North Melbourne at Arden Street on Friday.

Brayshaw’s pre-season hit a snag a month ago when he damaged a ligament in his elbow at training, which has restricted him to mainly running duties since then.

Angus Brayshaw is hopeful of being ready for round one after having his first competitive hit-out for the year in the practice match against North Melbourne.Credit:AAP

The midfield bull started the game on Friday up forward and after having minimal impact, he shifted to the middle in the second half and got better as the game went on. He now hopes to play a full game against Hawthorn in Launceston next week.

“It’s probably not 100 per cent and it’s obviously just at the point of the year where I really felt like I needed to get some game time in and the physios and the docs felt like it’s not going to get worse, it might be a bit sore, but it felt really good today.

“It was a really physical game … it got plenty of chances to get tested out.

“So [I’ll] just build on this and I’m out of rehab now so a bit more contact in training and I should be right for round one.”

Brayshaw headlined a modest group of senior Demons and Kangaroos who formed a clean bill of health for both clubs at the final siren. The likes of Bayley Fritsch, Jake Melksham and Adam Tomlinson ran out for the Demons, while Robbie Tarrant, Trent Dumont, Jasper Pittard and Majak Daw got valuable minutes for the Kangas as round one draws nearer.

New North recruit Aiden Bonar didn’t complete the match, but only as a precaution due to hamstring tightness.

Both teams rested a big group of their best players, but the Demons won the game by 22 points, despite fielding eight VFL-listed players, and could’ve won by a lot more if they weren’t so inaccurate. Instead they had to settle for a score of 7.13 (55) to North’s 5.3 (33). 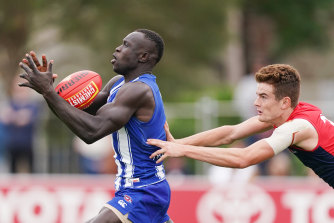 The Kangaroos’ Majak Daw marks ahead of Bayley Fritsch of the Demons on Friday.Credit:AAP

Former Bomber Mitch Brown was the main culprit for the Dees. He looked dangerous up forward all game and would’ve been the best player on the ground if he didn’t boot 0.4.

“He’s sticking his hand right up. He’ll be really good for us if he can get up and going … he had a great game, I was really impressed with him today.” 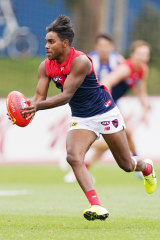 Melksham and Tomlinson only played a half for the Dees, but both impressed from their limited game time, while Brayshaw and Fritsch stood out in what was a typically error-riddled game for this time of year.

Bedford was the game’s only multiple goalkicker with two, while Pickett was very exciting in attack with his pressure, attack on the ball and physicality.

“He’s just an absolute livewire and tackles to hurt I think as well, which is a really good sign,” Brayshaw said of Pickett.

“He hunts people in the forward line and I’m really excited to see how he goes. I don’t know if he’s going to play round one, but he won’t be far off the mark. I think he’ll be a real worry for opposition defenders.”

Pittard and Dumont impressed for the Kangaroos while Aaron Hall and Shaun Atley had an impact, too. Young forwards Charlie Comben and Curtis Taylor looked promising from limited opportunities for the Roos, each booting a goal.

Related posts:
Previous Post: Mile temptation could be too hard to resist
Next Post: Dillian Whyte makes Deontay Wilder threat – ‘I’d make him s*** himself in the ring!’