Brisbane have locked in a top-two finish with a 22-point win over Sydney but the Swans provided more evidence they could be ready for their own finals tilt sooner than later.

The Lions needed a victory to assure themselves of the double chance and a qualifying final at the Gabba – whatever value home-ground advantage still holds this season – but John Longmire's young side made them work for it.

Trailing by 13 points at the final change, the Swans closed to within two after goals from Will Hayward and Parker put a massive scare through the Lions.

Brisbane responded with their best period of the match, piling on three quick goals to head off Sydney's brave rally and put this one to bed – before Eric Hipwood, with two Swans on his tail, added the cherry on top with a sensational snap from deep in the pocket.

"There's a lot that we did right," Longmire said. "We took the game on in that last quarter, we wanted to win it, not save it, not grind our way back in. We had a real crack. Sometimes as a young team you get it right, sometimes you get it wrong … they're a top two team for a reason. We came into this game, the youngest team for the round, and we keep on learning."

Longmire was disappointed with the manner they fell away late but, in fairness, the Swans were a man short for almost the entire match – former Lions goalsneak Lewis Taylor injured his foot midway through the opening term, ruling him out and robbing his team of a rotation. 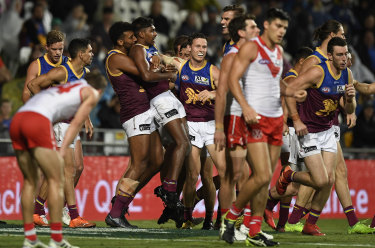 Lachie Neale, among the hot favourites to win the Brownlow Medal this year, was harassed out of the game by Ryan Clarke, who restricted him to 15 touches and provided Brisbane's premiership rivals with a free template to use for themselves in the finals.

With the opposition's prime mover neutralised, co-captains Josh Kennedy (26 disposals) and Luke Parker (33 disposals) led the way and the likes of Justin McInerney, Harry Cunningham and Ollie Florent followed them in.

Add in a fit Lance Franklin, Isaac Heeney, James Rowbottom, Jordan Dawson and George Hewett – maybe even Joe Daniher – and there's every reason to think Sydney could sneak into the eight next year.

The Lions, meanwhile, will be happy to bank the four points and move forward. With a dead-rubber clash against Carlton to come before the pre-finals bye and a few of their own key names missing, what matters most for them is what happens next.

"Sydney came to play – we knew they would, they're a club we have a high amount of respect for," coach Chris Fagan said. "For our players to dig deep when the scoreboard got close, it's an effort I'm proud of, to be honest. They did respond to the occasion and lifted the intensity and finished off the game strongly."

Jarryd Lyons (20 disposals) and Daniel Rich (23 disposals) were among their best, while Charlie Cameron, Zac Bailey and Hipwood each finished with two goals. Tthe exciting Keidean Coleman kicked the first of his AFL career, and provided a couple of eye-catching highlights that point to a bright future.