Saracens and England’s Brad Barritt talks exclusively to Sky Sports about the Sharks’ agonising defeat in the 2007 Super Rugby final, refereeing decisions, and lingering disappointment from the day…

The year is 2007, and a 20-year-old Barritt is in the starting line-up for the Sharks – his home club in South Africa – as they host rivals the Bulls in the final of the Super 14.

A South African side had never won the competition since its inception in 1996, and having finished top of the log and seen off the Blues in the semi-finals, the Sharks would host the final at Kings Park in Durban – the only time in history they would ever do so.

Leading by six points, minutes into dead time of the match, the Sharks conspired to achieve defeat from the jaws of victory as Bryan Habana scored a Bulls try in the very last play. The Sharks would never go on to clinch a Super Rugby title in any year since.

Barritt played the full 80 minutes that day back in 2007, and recounts an extraordinary final with Rupert Cox in the latest episode of our One That Got Away series…

“Thanks for having me, and probably exposing my most heart-wrenching experience in rugby,” Barritt says. “I did my best to scour through a few clips and I was very soon reminded of the few instances throughout the game where we could have closed it off, and that’s probably the one thing that anybody involved with that Sharks team really can’t put to bed.

“You have the game all but won for 79 minutes of it, and I think everyone who was involved in that experience would have learned a hell of a lot in that time.

“More importantly, it’s one that we really struggle to forget and get over that we didn’t win.”

2007 would prove an incredible year in South African rugby. After the Bulls’ success in the premier club competition of the southern hemisphere, the Springboks would of course go on to clinch a Rugby World Cup title in the same year in France.

Crowds were fervent across the whole calendar year too – indeed, the Sharks’ attendance would not dip below 40,000 in that time, a far cry from attendances across the southern hemisphere today.

What does Barritt recall from the day itself?

“I think back to how I was back then as a young player building up to a big game,” he says. “Thankfully, I was able to get over a lot of the things that I was as a young man.

“My brother always used to make fun of me because a day or day and a half before a game, I was pretty much in lockdown, stewing in my room waiting for the game to happen.

“He used to say: ‘You’re going to the darkness now’, and I used to just go and watch a movie and keep to myself up until the build-up.

“With the Sharks, we used to meet before games at a hotel by the Umgeni River, and I just remember on that day a feeling of excitement, but also tension. “You could get the sense that the team knew we had the strings to pull this off, but against the Bulls, you could never discount them.

“In terms of the build-up and driving to the game, I remember it being the best atmosphere at Kings Park I could remember. The only other vivid memory I have of Kings Park is as a young boy watching the Springboks face the Lions in 1997.

“There was a jubilance in the air and a real anticipation that something major was happening that day in Durban – and it’s probably something I’ll always remember.

“The overwhelming feeling you have is that it was such a special day in Durban. The only difference I guess as a player, is you’re so absorbed in the moment, you probably don’t appreciate it.

“You realise now the magnitude of what that day was. A 54,000-seater stadium where people were crammed in like sardines, just created a phenomenal buzz.

“One vivid memory I have is looking around just before kick-off and what this day meant to a lot of those guys: John Smit, AJ Venter, Jacques Botes, Johan Ackermann, Johann Muller, Deon Carstens, BJ Botha – guys who had been at the Sharks a long time, and for them to have achieved a home final, it was hopefully going to be an amazing end.” Non-red cards, missed chances to end the game, and a knock on that wasn’t…

To the game itself, and long before Habana broke the Sharks’ hearts with a last-gasp try, he should probably have departed via a red card.

Indeed, just 90 seconds in, Habana took out an airborne Percy Montgomery, well and truly upending him, as the full-back landed on his neck/upper back area.

Today, it would be an automatic red card without discussion, but quite incredibly, Habana received nothing on the day, not even a yellow card. Referee Steve Walsh, taking charge of his first Super Rugby final, choosing to keep 15 vs 15.

“It’s still baffling for every Sharks player that day too,” Barritt says.

“That law had come in and it had not gone to a red card offence [in a match yet], but it had gone to a yellow.

“Often I think what players get frustrated with in sport is that sometimes decisions are made because of the time in the game. Because it’s so early on, they don’t want to affect the flow of the game, as opposed to being 60 minutes in and then it’s a definite yellow.

“But you have to roll with the punches and as a team, we were able to put that setback aside and get back into the game.” 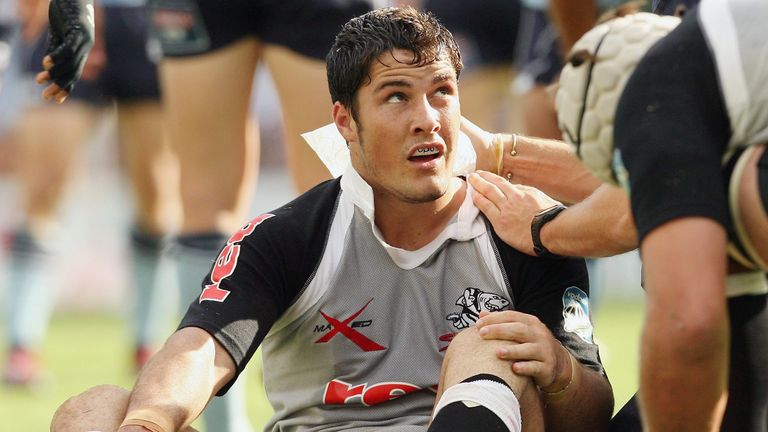 Tries from JP Pietersen and then Albert van den Berg – the latter with three minutes left on the clock – had the Sharks six points ahead with a conversion to come.

Dispatch the conversion, and the final would be over – a two-score lead an impossibility to claw back. Sharks kicker Montgomery was gone by that point, however…

“We have a conversion on the 15-metre line, and then you think back to the moment early on in the game when our 90 per cent kicker Percy Montgomery was taken out, and the brave man that he is soldiered on for another 60 minutes.

“In many worlds, that would have been a bread and butter conversion on the perfect side for a left-footer, and the Sharks would have been eight points up with two minutes to play.”

As it was, a young Frans Steyn missed the conversion and the Bulls remained alive, just.

“What cascaded in that last minute is something that most of the team will regret forever,” Barritt says.

“I do vividly recall a phase of play going on for three or four minutes, and within it, I think there were two opportunities where we had possession and if we’d kicked it out, the game would have ended.

“And that’s probably why it is such a big regret and hurts so much for Sharks players. Ultimately the game was done… but there was a bit of panic, overexcitement.

“And there was another refereeing moment Sharks fans struggle to forget. There was a tackle made on the near side of the pitch where there’s a breakdown, a ball gets dislodged and knocked on by one of the Bulls hands, before the days of TMO, and the streetwise team the Bulls are, they managed to scoop it back and the linesman and ref missed it and play is allowed to resume.” Thereafter, Habana stepped in-field past a stream of frantically sprinting Sharks jerseys, before meandering through and diving over almost under the posts, leaving Derick Hougaard a near-simple conversion to win the game 20-19 at the last.

What were the feelings at that moment?

“He [Habana] broke our hearts, broke Sharks hearts all over the country,” says Barritt.

“The feeling that absorbed me at the time was one of isolation, feeling like there was a bubble around you and a total out-of-body experience. “I’ll never forget Jaco van der Westhuyzen climbing onto the bars at Kings Park and celebrating. It was a very bitter pill to swallow and I’ve probably never spoken about it at length like this before.

“As a young player, I remember the tears that were flowing in the Sharks changing room. Grown men, guys I respected so much, absolutely being in bits about it.

“And I’m not lying to you, I probably had sleepless nights for about a month afterwards.

“You woke up with this feeling of: ‘Wow, this could have been so memorable’, but that’s the beauty of sport in so many ways.

“There’s nothing you can take for granted, and that’s something that’s lived with me since then.

“But nothing really can be as heartfelt or something that emotionally affected me as much in sport as that game in Durban on that day.

“It was the first time it had happened, I’d had very much a honeymoon career to that point and so it was a bang.

“As a Sharks player and a guy who still loves the Sharks, it’s definitely a missed opportunity. It will live with those Sharks players forever.” Habana gliding over is an image ingrained in the minds of all Sharks fans, even today – and Barritt says it’s one which will never leave his mind either.

“The fortunes were written for Bryan [Habana] that year. He’d go on to be a top try-scoring wing for SA in 2007 as they won the World Cup.

“You could sense everything that was going on but you felt closed off to it. Almost like you were numb with shock.

“It was the oddest feeling. There was such despair around me, I didn’t know who to talk to or what to say in the moment.

“I can’t really describe it, like this glaze of smoke around you, feeling everything but you’re numb to it. “Now, there’s a level of respect we have for each other that you’ve been through something – in sporting terms – pretty traumatic – and a care for each other, which will long surpass your involvement in sport.

“I’d imagine it’s a game that all 22 involved that day still can’t watch. It still hurts.

“You’re playing something you love, you’re doing it with people you care about and the whole summation of the season shouldn’t be about that one moment.