Eddie Betts still knows how to electrify the Carlton forward line but the Blues couldn't find a way to stop the Brisbane Lions on Sunday night.

The Blues showed good signs early after notching up a 24-point lead in the second term, but the Lions showed why they expect to again be a top-four side as they overran the Blues in the final term for a 45-point win at IKON Park to close out the pre-season competition.

Good cheer: Mitch Robinson of the Lions and Eddie Betts of the Blues share a laugh during the Marsh Community Series match between Carlton and Brisbane at Ikon Park in Melbourne.Credit:Getty Images

Brisbane forward Charlie Cameron was a menace, especially after half time, finishing with five goals, 21 disposals and eight tackles. Many of the Lions' 2019 heroes including Lachie Neale, Dayne Zorko and Jarryd Lyons worked their way into the game.

The home side had the advantage in attack, with 60 inside-50s to 37 for the Blues.

Patrick Cripps and Sam Walsh were still as potent as they were last year, possibly more so with the Blues skipper having 19 of his 30 disposals by half time while high-profile Gold Coast recruit Jack Martin looked a changed man in navy blue with a host of silky touches.

One passage from Martin in the third term stood out when he manoeuvred to the front of a pack and marked the ball on the forward 50-metre line before spearing in a pass to Jack Silvagni. Silvagni missed his attempt at goal and the Blues will know they need to improve their conversions to remain competitive in the season to come. 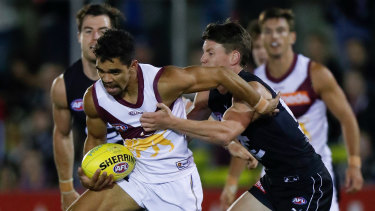 Lionised: Charlie Cameron showed glimpses of the form that made him one of Brisbane’s star performers in 2019.Credit:Getty Images

Will Setterfield, Sam Docherty and Jack Newnes all found plenty of the football, but at times their disposal missed the mark although all look good chances to face Richmond in the season-opener on March 19.

Betts kicked two goals and set-up a couple of others, the AFL great showing his experience and leadership will empower the Blues in his second stint with the club.

Not only did Betts look threatening close to goal, he also helped bring out the best in some of his club's less celebrated names with some calm words to Levi Casboult before he kicked a goal on a tight angle in the third term. Betts also fed former St Kilda player Jack Newnes and utility Michael Gibbons for attempts at goal.

The Lions will face much sterner competition when they face Hawthorn at the MCG in round one but their depth of contributors and mix of forward targets again looks impressive, key forward Eric Hipwood's tireless work stood out early with a chase-down tackle on Walsh.

The Blues may have some concerns with defender Caleb Marchbank who was forced from the field with a knock to his knee late in the third term. 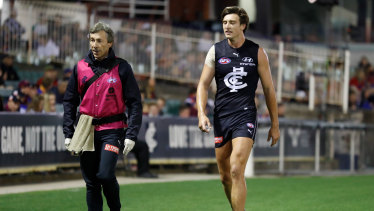 Hobbling off: Carlton’s Caleb Marchbank leaves the field after suffering an injury.Credit:Getty Images

Mitch McGovern and Lachie Plowman were expected to sit out the last term as the team managed their resources in a last pre-season game, but Plowman was forced back onto the field when Marchbank went to the locker room. Plowman went over on his ankle late and limped off the field, adding to their woes.

The Lions won scores of supporters last year with their fearless run into the top-four but their slow start to Sunday’s game looked a little concerning. The Blues put several goals on the board before the visitors started to work into the match.

With Luke Hodge now in the coaching box, the Lions will need more players to push the group. Former Hawks great Grant Birchall grew into his new role kicking a late goal. 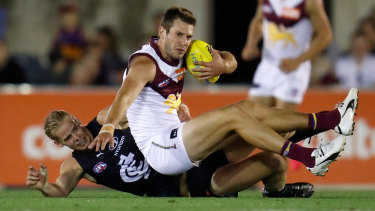 Rough and tumble: New Lion Grant Birchall goes down after a tackle by Tom De Koning of the Blues.Credit:Getty Images

The positive was they worked their way back into the contest and showed they were clearly superior in the last term.

Carlton veteran Ed Curnow had television viewers laughing with a new mouthguard which appeared to have a life sized image of teeth and gums on the front. When he took it out you could be excused for thinking he was taking out some dentures.