As the Roosters’ 1975 team faces the possibility of losing its share of the record for consecutive wins (19) to Melbourne, their fullback, Ian Schubert, answered the question: how many Storm players would make his 1975 team?

“I wouldn’t put anyone in front of the blokes I played with,” he said, despite admiring the skills of the Melbourne players who will set a record should they defeat Parramatta on Saturday night.

It is unlikely anyone has had a debut year like Schubert, coming from high school in Wauchope to the Roosters wing; replacing fullback Russell Fairfax when he broke a leg; named man of the match in the grand final and chosen in Australia’s World Cup team.

“To do that, you have to have quality players around you and a very good coach,” he said.

Schubert wouldn’t comment on whether the Storm’s Ryan Papenhuyzen or Nicho Hynes would replace him as fullback in a joint team selected from both squads.

But what about Josh Addo-Carr? Would he replace winger Bruce Pickett? Schubert reminds us Pickett was quite quick, while conceding Addo-Carr is very active in attack. Bill Mullins would claim the other wing position.

And Cameron Munster? Surely he is superior to five eighth John Peard? But apparently no one was better than “Bomber” at launching high kicks into the in-goal, a major tactic in the 1970s.

Still, when Munster flicked a switch at half-time in last week’s Titans game, he showed he is a master of modern-day attack.

So many of the choices are line ball, although second-rowers Arthur Beetson and Ron Coote would be hard to displace in any era.

Roosters hooker Elwyn Walters won scrums, a task not required of today’s No.9s. However, he wasn’t as clever as Harry Grant from dummy half.

Storm prop Christian Welch is the NRL’s best defensive player and can offload, probably putting him ahead of the Roosters’ Grant Hedger, while Jesse Bromwich and Ian Mackay are also line-ball selections.

Schubert is an admirer of Storm half Jahrome Hughes but obviously prefers Johnny Mayes, while the Roosters dual-international John Brass would own one centre position.

Most would argue centre John Rheinberger, whose 1975 grand final appearance was the only time he started a game as a first-grader, would be displaced by the Storm’s Justin Olam.

Schubert admits, “I wouldn’t like to be playing against him [Olam].” 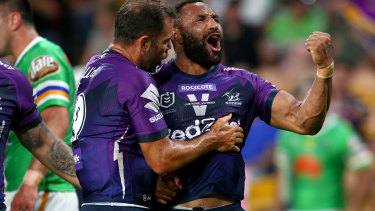 But if the joint team is selected over a season, the choice may be international Mark Harris, who broke his leg 10 minutes from the end of the preliminary final.

Harris’s centre partner in that game was 20-year-old Reg Clough, another local junior, who had played two under-23 matches and was deputising for the injured Brass.

An ankle injury in the preliminary final ruled Clough out of the grand final. He, too, never played another first-grade game.

Given today’s expanded bench and interchange, no player would take the field in a finals match with such limited experience.

“Everything is so different now,” Schubert says. 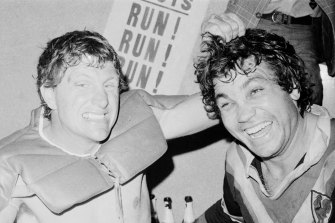 Eastern Suburbs stars Ron Coote (left) and Arthur Beetson share the joys of victory in the dressing room after the 1975 grand final between Easts and St George.Credit:John O’Gready

The Roosters weren’t required to fit their player payments under a salary cap, while the Storm are not subject to an import rule.

It was the first year of a 13-import rule, which meant the Roosters were required to field three grades with only 13 players recruited from outside the district. If it was applied in 2021, the Roosters would not be able to squeeze their internationals into a salary cap, while the Storm, if transported to 1975, could field only one local junior, winger Dean Ieremia.

Schubert points out today’s players are professionals, and his coach Jack Gibson did it “all on his own” without a squad of assistant coaches.

But the independently wealthy Gibson had an advantage over his rivals in that he coached full-time. Rather than reinvent himself, as Craig Bellamy has done over 19 years at the Storm, Gibson coached at six clubs, reinventing them.

Perhaps the most telling difference is the quality of the opposition. The 1975 Roosters and the 2021 Storm have been beaten only twice (coincidentally in rounds two and three) but the Roosters won the minor premiership by 10 points.

The Storm, with two games of the regular season to play, are yet to win the minor premiership, indicating the quality of the other top four teams.

As Schubert concedes, “The quality of opposition has something to do with it”.