Bath players have become the first to openly revolt against the apparent blanket deduction which has been introduced by nearly every Premiership club. And they have demanded a meeting with Chief Executive Tarquin McDonald and club owner Bruce Craig to force a change of heart.

Premiership sides who less than six months received around £13million each from hedge fund CVC started to introduce the wage cuts to offset the losses in revenue.

Many estimate that they will lose between £300,000 and £500,000 for every match that does not take place because the sport has been shut down.

England coach Eddie Jones has accepted a 25 per cent cut in his £750,000-a-year wages with the RFU fearing that they will lose up to £50m over the next 18 months.

Championship leaders Newcastle Falcons have placed all their players and staff on furlough – a period of unpaid leave.

While Premiership Rugby, who runs the top tier, have already started to withhold funds that are due to clubs.

JUST IN: Premier League release fresh statement after meeting with ‘difficult decisions’ to be made

They are fearful of a clawback in money from broadcasters and sponsors if the season is cancelled.

Bath players are the first to demand talks with the club while the Leicester Tigers squad is also known to be against the cuts.

The Sunday Express has seen a draft of a letter that Bath players are being asked to put their name to raise their objections.

“We acknowledge the exceptionally challenging circumstances that the industry is facing and please, rest assured, that we remain fully committed to the club and our collective futures.

“We do not agree to the reduction in our pay. This is a breach of contract, and we reserve our rights to claim our full contractual entitlements.”

And it could be the tip of the iceberg with clubs fearing that they could be inundated by claims of an illegal deduction of wages if an agreement isn’t reached.

Top sports lawyer Richard Cramer managing partner of Leeds based Front Row Legal says the law is clear cut, but a judge might back a club if they claim they needed to survive.

“If each club imposes a 25 per cent deduction without approval that is a unilateral variation of the contract of employment which is not permitted. 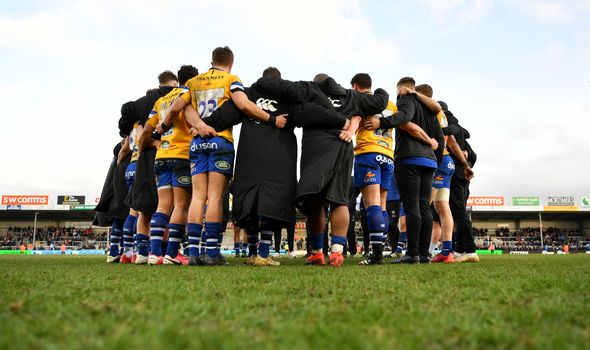 “That would be unlawful and would be a breach of the contract on the part of the club and a player could ask for their registration to be released.

“But because we are living in a weird and unprecedented time the clubs may actually prefer the players to walk out on their contract right now.

“Because unprecedented events are going on in the world, they may believe it or not find that a judge is maybe sympathetic. But it is a hard argument for the club to win,” he said.