Tariq Sims may be unwanted by St George Illawarra, but he remains very much a part of Brad Fittler’s NSW Origin plans, especially with the Blues’ back-row depth being tested by Cameron Murray’s injury.

Murray wasted no time phoning Fittler on Tuesday to let him know he was out of Origin I as he undergoes shoulder surgery. A lock forward at South Sydney, Murray has been mainly utilised as a back-rower in the representative arena.

Fittler, unfortunately, received a similar message from Ryan Papenhuyzen informing him he, too, would be unavailable for selection for the June 8 opener because of a knee and hamstring injury.

While the Blues have no shortage of lock forwards, with Penrith’s Isaah Yeo, Manly’s Jake Trbojevic and even Cronulla’s Dale Finucane, the edge forwards have become a concern.

Penrith’s Liam Martin will be one of the first picked, while Fittler has enormous respect for Sims, 32, and 30-year-old Tyson Frizell, even though they are in teams posted outside the top eight.

Frizell will not even feature for the bottom-placed Knights during Magic Round.

Tariq Sims may be unwanted by St George Illawarra but he is still very much wanted by NSW coach Brad Fittler.Credit:Getty Images

But Fittler knows the senior second-rowers have never disappointed him in the past – and loyalty will all but see them included in the first 24-man squad to be named in three weeks.

“Tariq played all three games for us last year, and I just like what he’s about,” Fittler told the Herald. “He’s not too old. I’m old. He’s always done a job for us. It’s the same with Tyson. Players always look better in better teams, but I know what he’s about.”

Martin, who has been excellent for the premiers this season, missed training on Tuesday because of illness but will play against Melbourne on Saturday. Roosters pair Angus Crichton and Victor Radley can play both back row and lock, while South Sydney’s Keaon Koloamatangi and even young Manly wrecking ball Haumole Olakau’atu are left-field options. “I’m a big fan of [Olakau’atu],” said Fittler. “I’ve also been told he trains hard.” 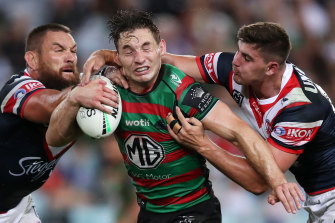 Cameron Murray will be sidelined for up to a month.Credit:Getty

Fittler said of losing Murray: “Cam rang me and told me he was going to have an operation. I also spoke with their trainer [Travis Touma] who is one of our trainers. There’s nothing else you can do.

“We’ll miss him a lot. Two years ago, he wasn’t there. He got hurt in the first game in Adelaide – he was on the field a few minutes, did the splits and that was the end. We lost that series.”

Storm flyer Papenhuyen was deep in the mix, with Cronulla’s Nicho Hynes, Canberra’s Jack Wighton, and even Radley and Stephen Crichton all capable of filling the utility role.

“It’s heart-breaking for him. ‘Paps’ was right in the discussion – you could not look past him because he was playing so well,” Fittler said.

The NSW coach made a cameo at Penrith training where he filmed a segment for Nine, owners of this masthead, and looked ready to run the session with Ivan Cleary still sidelined with a painful knee injury, and assistant Cam Ciraldo in COVID isolation.