Former No.1 draft pick Paddy McCartin was prepared for the news he could never play football again when he walked into a meeting with the AFL and a panel of brain specialists around 18 months ago.

Eight concussions in five seasons with St Kilda had left his career hanging by a thread and his life in disarray, dragging him into a dark battle with debilitating symptoms invisible to everyone but himself.

Paddy and Tom McCartin could be playing footy together for the first time this year, if the former’s comeback bid via Sydney’s VFL team gathers speed.Credit:Nick Moir

“If there was 0.01 per cent chance that I was at a greater risk than someone else, or my threshold had lowered and I was more susceptible to concussion than the next person running out next to me, then I was going to retire,” Paddy said.

“I went into that meeting with that mindset. I was going to give it away, but I was told that that wasn’t the case, and from there it was going to be my decision.”

Fast forward to today and the hunger has returned, his pathway back to the AFL is clear and there’s an item on McCartin’s bucket list ready to be ticked that he’d previously thought was unattainable – playing alongside his brother, Tom, for the first time.

It’s a big season ahead for both McCartins. Tom, 21, is being converted into a full-time defender for Sydney while Paddy, 24, has been given a chance by the Swans to resurrect his career with a spot on their VFL reserves list.

If all goes to plan, he could be back in the big league and at the opposite end of the park to Tom by the middle of the year. 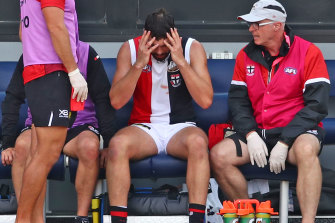 Paddy McCartin’s last concussion in March 2019 put an end to his career at St Kilda.Credit:AFL Media

Embracing his fresh start in the harbour city, Paddy – who hasn’t played a game since his last head knock in the 2019 pre-season – can now see how the hellish road he was walked over the past seven years has actually been a “blessing” in disguise.

Aware of how delicate discussions around concussions and CTE in sport have become, McCartin can understand why outsiders might think he’s playing with his own life by returning to footy, given his previous troubles.

But he stressed – not for the first time – that he has been medically cleared to play by some of the world’s top doctors.

And getting the green light, McCartin said, provided him with some much-needed direction in life and enabled him to attack his rehabilitation with real purpose.

The pandemic put his comeback plans on the backburner last year, with clubs reluctant to take a punt on him without first seeing him play, and the reduction in list sizes further complicating the scenario.

But the Swans – who need key position depth given Franklin’s regular injury worries – always showed interest, and his familiarity with the club and the city through Tom has brought him up to speed quickly.

“I’m loving having him up,” Tom said. “I’ve been spending most nights and days with him. It’s good for him to have another crack at it. It’s obviously been a tough couple of years but he’s really headstrong, Paddy, and he’s stayed positive and kept himself really fit. It’ll all work out for him because of the amount of work that he’s put in.”

The mid-season draft looms as Paddy’s big opportunity, provided he can produce the sort of form in the VFL that can remind people why the Saints took him with the first pick in the 2014 draft.

“I’m really confident I’m going to play and play well – I just need that opportunity, and I’ve got it,” he said.

“I’ve got that energy back for footy, which I probably didn’t have for a while, even before my concussions. [Melbourne is] a high-pressure environment and there’s a lot going on. To be up here now, I’m able to enjoy it a bit more and I think that will be very beneficial with my footy and just for my overall wellbeing.”

Paddy, meanwhile, has started spending his down hours outside of footy helping other people who have walked in his very shoes. He has launched a new mentoring business, Helping Hands, for people struggling with concussion injuries, type one diabetes or mental health challenges – all of which he’s grappled with himself.

“There’s people that get up on Monday and have to go to work after getting hit on the head on the weekend or having concussion. It can be really tough,” he said.

“It’s definitely an area that at a grassroots level especially needs to keep being looked at, and I’ll always be there to help if the AFL or anyone is working on stuff that will make that possible.

“I’m someone who’s got a lot of experience in these areas and to be able to give that back … it’s a no-brainer for me, really. It’s making the best from some situations in my life that have been difficult and being able to pass on all the lessons I’ve learned and experiences to people.”