Nathan Cleary had a few hours sleep, farewelled his NSW Blues teammates in the foyer of the Sofitel Hotel, jumped in a car, drove home along the M4 Motorway and spent his first day outside a biosecure bubble doing something he had been desperately waiting to do: watch a replay of the grand final.

Sitting by himself in a darkened room, he relived the nightmare that was Penrith’s 26-20 loss to Melbourne.

“I didn’t really watch it straight after the actual game,” Cleary tells The Sun-Herald. “It was so disappointing. To dream of playing in a grand final, then to play in one and fall short, you feel like you let a lot of people down.

“I watched it as soon as I got out of the bubble. It was important for me to watch the game and see where I went wrong and what we could have done better.

“I watched it a second time a few weeks ago with a few of the boys at the academy. But I probably won’t watch it again now. I’m ready to move on from it. I don’t want to live too much in the past. Hopefully it helps me in the future.

“I’ve put the nail in that coffin and will refuse to dwell on it.” 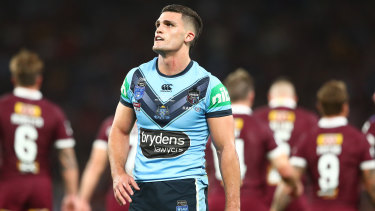 The Panthers then won 17 in a row as they stormed through the regular season and into their first grand final in 17 years. But they saved their worst til last as they were humbled by Melbourne.

Cleary then picked himself up to play a key role in Brad Fittler’s Origin team. But, again, it all went wrong as the Blues lost to a Queensland team labelled the worst in history.

Amid all that Cleary was pipped for the Dally M Medal as Blues teammate Jack Wighton swooped down the outside for a surprise victory.

It was quite a ride.

Cleary joined his Panthers teammates in North Sydney this week for a range of promotions ahead of the 2021 season. Jarome Luai, Brian To’o and Stephen Crichton stood around a giant speaker and danced to the likes of Boyz II Men, entertaining the lunch-time crowd.

Nathan was happy to watch a bit of NBA on his phone while his father and coach Ivan Cleary took a trip down memory lane to the nearby North Sydney Oval. Ivan played two seasons and 37 games for the Bears in 1994 and ’95.

When it comes to knowing if the grand final loss – not to mention the Origin I and Origin III defeats – had scarred his son, no one would know better than Ivan.

Let’s face it, if Nathan has any mental baggage, you might as well put a pen through Penrith’s premiership hopes right now.

Ivan was laid up in the Mater Hospital after hip surgery the night the Blues and Nathan lost the unlosable Origin series at Suncorp Stadium.

“I was a bit worried about him,” Ivan admits. “But he seemed really good when we spoke afterwards. He was disappointed, but he had kept it all in context. He’s come back well and he’s trained well. He’s in a good space.”

At just 23, Nathan has already played 100 NRL games, but is another five years off his best, according to Ivan.

When you ask Cleary snr what areas of his game Nathan can improve, he says: “Everything. He does the basics well and cares about the team stuff and his defence is always good. He’s 100 games in now, but he’s still only 23. He’s still a baby as a playmaker.

“He can get better at everything. That’s the way he thinks. The game will continue to slow down for him. He’s probably five years away [from his best].”

“‘Nat’ has been able to deal with it to this point,” Ivan says. “The last two years have been really good for him. He dealt with things really well last year. Even coming out of the disappointment at the end of the year, which included a really good Origin game in the middle of that, it will make the man and make the player.”

Nathan continues to weed out the opinions he actually cares about from the white noise. He’s not taking notice of “guys on Twitter with cars as their profile pic”.

Panthers fans will be wondering if Cleary is promoted to captain after the departure of James Tamou and whether it all becomes too much of a burden: face of the club, rep star, coach’s son, playmaker, goalkicker …

“He wouldn’t be the finished product, that’s for sure,” Ivan says of the captaincy. “But who is when they first start? He’ll be critical in our leadership, but captaincy wise, I’m not sure what we’ll do. Isaah Yeo is in a good space with his career and in this team. Even ‘Fish’ [James Fisher-Harris] has really stepped up as well in his own way. He might not do the ‘Churchill speech’, but everyone respects him, and he talks a lot on the field.”

Nathan was meant to escape to Perth before a fresh COVID case forced him to spend his holidays in downtown Penrith. The suburbs are a fair come down from his normal post-season US getaways.

He knows the Panthers have the team to go one better than they did in 2020. They are an even younger squad again this year. Cleary and Luai will improve as a combination. So will Crichton, while Canterbury-bound Matt Burton could loom as a trump card with regular game time.

Penrith won 17 in a row before their defeat in the decider. There is redemption to be had.

If things go to script out in 2021, Nathan will watch this year’s grand final more than twice.