For the second year in a row the pandemic shaped the AFL season, putting teams back in hubs, players and coaches on protocols, and keeping league executives on their toes once again. But for the Sydney Swans and Greater Western Sydney Giants, it wasn’t only COVID-19 that defined the year. Both teams wrote their own script, bouncing back from a disappointing 2020 to sneak back into the top eight and give a glimpse of what seems to be a very positive future for both Sydney teams.

Let’s take a look back at the season that was, from an unashamedly NSW-centric perspective.

WORD OF THE YEAR: Cygnet

That’s a baby swan. And that word got a fair workout this year, thanks entirely to the sudden emergence of the new-look Sydney Swans as a premiership threat and the likes of Errol Gulden, Braeden Campbell, Logan McDonald et al as instant fan favourites.

Everyone knew they were coming at some point, but it came well ahead of schedule – a stunning 45-point win over then-reigning premiers Richmond at the MCG in round three was the moment this new-look group, led by a rejuvenated Lance Franklin, announced their arrival to the footy world.

From that moment, it was an exhilarating ride all the way through to their rather anti-climactic defeat to the GWS Giants in week one of the finals.

Swans fans won’t forget their round three win over Richmond in a hurry.Credit:Getty Images

Don Pyke. The former Adelaide Crows boss joined the Swans as John Longmire’s senior assistant this year and his impact was immediate. Longmire has long had a reputation as a pretty defence-minded coach – Pyke added his ideas around offence, and the combination proved incredibly potent.

Tom Hickey. At the end of 2020, Swans fans couldn’t get their heads around the decision to trade Aliir Aliir to Port Adelaide. It turned out to be a pretty shrewd move, because it helped them get the draft pick that got them Tom Hickey, who proved an instant hit in the ruck and was arguably the biggest signing of the year for any AFL club, given the impact he made in red and white. 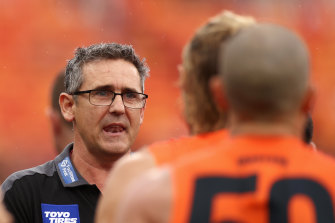 Leon Cameron. The Giants coach came into the year under serious pressure, having failed to back up their 2019 grand final appearance with a finals finish the next season. Then they went 0-3, and the knives were out. But the way Cameron turned their year around, guiding them all the way to an unexpected semi-final berth, should keep the critics at bay and ensure he’s got the job for as long as he wants it.

The AFL presence in Sydney. The big shame about the Swans’ breakthrough season was that the best bits of it happened interstate. They got eight home games in, and the Giants three in Sydney, before footy was forced to skip town for a second straight year. That was good news for Tasmania, who got to host the Sydney derby elimination final – but it was a moment that would have been far more meaningful for the code in the harbour city.

Stephen Coniglio. It was another tough year for the fallen Giants star, who was restricted to only seven games after undergoing surgery on his ankle and toe early in the season. When he did play, it wasn’t to his usual high standards, with his form issues seeing him moved to the forward line. The captaincy proved such a burden he’ll now be sharing it with Toby Greene and Josh Kelly from 2022. 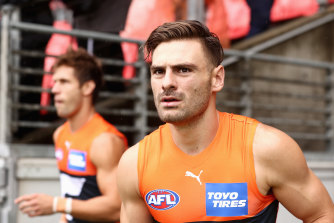 Sydney’s salary cap. The trade period was a sour post-script to a great season for the Swans, who were desperately hoping Jordan Dawson would stay put after a career-best campaign across half-back – only for him to request a trade to South Australia at the end of it. He cited family reasons for the move, but there’s little doubt his mind would have changed if Sydney had the capacity to offer him better contract terms.

Toby Greene’s ump bump. Just when it seemed he’d matured and erased the ill-discipline from his game, this one little incident shredded his reputation again. There was no reason for Greene to make contact with umpire Matt Stevic at three-quarter-time of their derby final against the Swans – but he did, and now he’ll miss the first five rounds of 2022 as penance for his arrogance. When he does return, he’ll do so under serious scrutiny. Hopefully, he’s finally learned his lesson.

MAN OF THE YEAR

Lance Franklin. Daylight second, third and fourth. This year belonged to Buddy. Who seriously thought we’d see football like we did from him again? After not playing a single match in 2020 and being sidelined for half of the season prior with a troublesome hamstring injury, Franklin turned back the clock with 18 games and 51 goals, vindicating the club’s careful approach to his strength work, conditioning and rehabilitation. He’s now five short of the 1000-goal milestone, and will probably play on beyond his rich nine-year contract if his body lets him. What a turnaround. 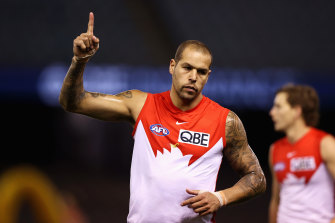 WOMAN OF THE YEAR

Kate Mahony. A former high-performance manager and physiotherapist with NSW Institute for Sport, Cricket Australia and the WTA, Mahony made history late in the year when she became the first key appointment for the Swans’ incoming AFLW team. Get used to her – as the club’s executive general manager of women’s footy, she’ll be at the centre of all the planning and recruiting that will unfold in the next 12 months before Sydney’s long-awaited first bounce in 2023.

VIRAL MOMENTS OF THE YEAR

What about that round 18 Sydney derby on the Gold Coast – the one that saw Toby Greene, Callum Mills, Matt de Boer, Harry Cunningham and Colin O’Riordan ruled out just before it started, all because they went to go watch the Wallabies play France in Melbourne a few days earlier? John Longmire embraced the moment for what it was, and the tears of joy he shed after Sydney’s 26-point win said it all about the team’s resilience.

Buddy’s comeback. It was hard to not get swept up in it all when Lance Franklin played his first game in 581 days against Adelaide in round two. There were 23,000 people in the house at the SCG, and they all would have felt like joining the 21 other blokes in red and white as they mobbed Franklin when he booted his first of three goals for the afternoon. Afterwards, he declared: “The leading forward is back.”

Eddie McGuire’s resignation as Collingwood president. As soon as he tried to introduce the club’s “Do Better” report on systemic racism by saying it was “a historic and proud day for the Collingwood Football Club”, his goose was cooked. The schadenfreude was strong in Sydney, where McGuire has few friends.

QUOTE OF THE YEAR

“Climate activism is essentially about just giving a shit.” — as if Swans fans needed another reason to love Tom Hickey. Then he joined more than 260 men’s and women’s footy players in forming a lobby group pushing for action on climate change.

Lance Franklin will kick his 1000th goal in round two against Geelong at the SCG, and it’ll be great. Newly-converted Buddhist Toby Greene will play like a man possessed in his comeback from suspension in round five against St Kilda – and he’ll never get in trouble with the AFL tribunal again. Both Sydney teams will meet each other again in the finals, but this time the Swans will get their revenge en route to the prelim final, where their campaign will end. Franklin’s body will hold up so well through it all that he’ll sign a one-year contract extension. The Giants’ fruitless search for silverware in the AFLW will continue, but their matches at Henson Park in Newtown will prove a massive hit, paving the way for the Swans’ women’s team to take the inner west by storm in 2023.