Late change for the Bombers ….

Today’s player to watch, as posted previously in this blog, is a late out. Essendon’s Harrison Jones has a foot injury and he has been replaced by Brayden Ham.

Medical subs today are Atu Bosenavulagi for North, and Marty Gleeson for the Bombers.

Jones is a late out today. Credit:Getty Images

From the Archives, 2004: Blues finish season on a high against Magpies

Here’s how our reporter on that day in 2004 saw a classic Collingwood v Carlton clash:

The consolation prize, after a wrestle worthy of a far more meaningful encounter, went to Carlton by a point.

The Blues, inspired by resurgent captain Anthony Koutoufides and engineered by the ever classy Matthew Lappin, will embark on the post-season wake with more to celebrate than traditional foe Collingwood, whose season was buried in front of 60,898 fervent supporters at the MCG.

Click here to read the full match report from that day in 2004. 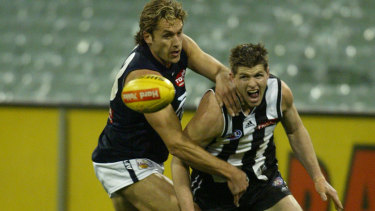 Today’s player to watch for the Bombers

Roos defence on the rise

The Kangaroos conceded just 60 points in last rounds win over the Eagles – the fewest points they have conceded in any game this season. The Bombers kept the Crows to their lowest ever score on record – conceding just 21 points.

Welcome all, hope lockdown 5 is treating you as well as it possibly can.

Get in touch in the comments for a chat if you feel like it.