On Sunday, Gary Ablett jnr, the greatest player of his generation, will return for his first game in 66 days, ironically enough at Gold Coast's home ground Metricon Stadium.

At the end of the year he will retire.

It means that this remaining stretch of football that could culminate with the Cats playing in a grand final at the Gabba has become Ablett's last chance.

End of an era: Gary Ablett is in good shape as he prepares to call time on a decorated footy career. Credit:Getty Images

The chrome-domed 36-year-old with an easy grin and a husky charm is, according to the Cats, the fittest he has been since returning to Geelong as the prodigal son in 2018 after seven years with the Suns.

Such is the regard in which he is held that there was never a serious question raised internally about whether he should automatically jog back into a team that looks set to earn their 11th top-four finish in the past 14 seasons.

A senior club official described the decision to select Ablett as "a no-brainer" and the Cats' coaches chuckle inwardly at the absurdity of the question, when asked whether his return could upset the team's cohesion.

Two premierships, two Brownlows, eight All-Australians, six best and fairests, good early season form and hands so clean they sparkle made Ablett a handy addition, having been allowed to make his own decision at the end of 2019 about whether he should play on.

The prospect of a premiership made pulling on the No.4 jumper again easy.

This season has been difficult but his devotion to family, football and faith has helped him through. 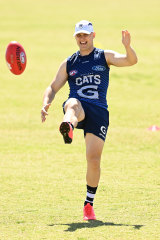 Most of this winter, his last playing football, became about family. He spent six weeks in Geelong with his wife Jordan and son Levi, and his mum Sue living nearby, viewing the rare opportunity to slow down alongside them at that time of the year as a positive.

As ever, Ablett was where he needed to be when it mattered most, grieving with Jordan when her mum Trudy died of cancer as they raised Levi, who the champion footballer revealed on social media is battling a degenerative disease.

During that turbulent time the Cats hierarchy left him alone as he gave himself to those most important to him. They knew he would do the work required to return if that's what he chose to do.

Premiership teammate Andrew Mackie, who pulled himself off his bed after a nose operation to help him prepare in Geelong, was assigned as his wingman, supporting Ablett in his campaign.

The relatively deserted GMHBA Stadium became their workplace with Ablett doing running sessions that would replicate what he would do in the game, his keg legs pumping through 14 kilometres.

Although the little master made sure he looked after the veteran Mackie's snout during kick to kick, their touch sessions were sharp.

When he wasn't sweating, Ablett was tuning into the Cats' game style, watching vision, getting football information via his phone from forwards coach Corey Enright and discussing what he needed with Mackie. 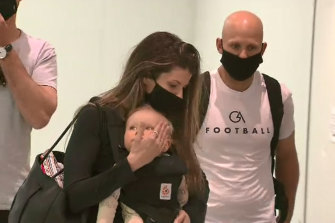 Family comes first: Gary Ablett missed a string of games to be with wife and son. Credit:Nine News

Simultaneously all sorts of messages from his teammates inside the hub would arrive, keeping him amused, connected and aware of how much he was missed.

Inside the gym, Geelong strength and conditioning coach Chris Dennis and physio Mark Young set the program to ensure Ablett remained strong, making his frame harder to shift than a bridge pile whenever he hovered over a contested ball.

Both Dennis and Young faced uncertain futures because of the soft cap cuts but they dropped everything to help Ablett, not just because he is a great player but because he is a grateful player, loved and protected by those close to him. 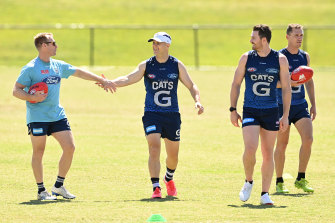 "He's a good friend and I've enjoyed hanging out with him so much over this last little journey," Mackie said. "He's focused on what he's got to do with his footy."

Keen to get Ablett back into the fold, the Cats asked the Queensland government whether it was possible for him and Richmond's Shane Edwards – who stayed in Melbourne to have his first child – to quarantine together in a private residence owned by a Cats sponsor so they could play earlier.

But the request was denied and the Abletts joined Mackie on the trip to the Hotel Mercure in Palm Meadows to prepare. He arrived up north on September 1 for two weeks of quarantine, the final leg in his solo preparation.

In the hub, Ablett's presence was understated, his well-known penchant for privacy maintained, but when he stepped out on the patch of grass, about 30 metres by 50 metres, that looked across to the ninth hole on the Palm Meadows golf course, alongside Edwards, Dan Hannebery and former Hawk Jarryd Roughead he came alive.

His willingness to engage in the contest shone through as did his humour, yelling, "Go Cats, Saints and Hanners" at one stage as the St Kilda midfielder kicked the ball through the Auskick goals set up as some sort of target.

The choppy turf wasn't a glamorous setting but it was serious with Ablett working himself to exhaustion in front of a crowd of onlookers on September 11, collapsing on his back at the end of the session.

A year earlier he had battled through the finals, a leg injury hampering him. This time he is fresh.

He chose not to talk to the media, rather let his football talk, but hours later, with Levi in his arms, Ablett was back on that grass. This time he was surrounded by 50 children in the hub playing a scratch match, their voices screaming "Gary, Gary, Gary" whenever they wanted the ball, the champion dishing it off with one hand, somehow balancing his son with the other.

By Tuesday, Ablett could hardly contain his excitement as he said his goodbyes to anyone and everyone in the hotel lobby before heading, already dressed in Cats gear, to his first main training session in months.

On Friday, an online video of his father Gary Ablett snr appeared just days before his comeback match, underlining the turbulent waters Ablett jnr has surfed throughout his glittering career.

Now he steps out to help the Cats into the top four before aiming to taste premiership success again for the first time since 2009.

Chris Scott is pleased. Supporters are too. The champion is ready for one more tilt.

"We are really confident in the training he has been able to do," Scott said.