Former AFL champion Eddie Betts has revealed for the first time the trauma he felt after a “weird” and “completely disrespectful” leadership training camp he attended as an Adelaide Crows player in the 2018 pre-season.

In his autobiography, The Boy from Boomerang Crescent, to be released on Wednesday, the three-time All-Australian player says the secretive four-day camp held on the Gold Coast, run by a group he has chosen not to name, left him feeling “like a piece of me was brainwashed”.

In the book, Betts writes that confidential information he had given in a private counselling session on the camp had been misused, and that the camp co-opted sensitive Aboriginal cultural rituals that offended him, jeopardised the wellbeing of other, younger Indigenous players within the Crows’ playing squad, and affected his family life. He blames it for a lack of form in 2018 that ultimately prompted him to leave the Crows.

“The camp ended up appropriating a First Nations peoples’ ritual of a ‘talking stick’ and attempting to apply it to all of us, even the non-Indigenous players and coaches.

“In my view, the talking stick was used incorrectly, and I was not aware that any Elder had given permission for it to be used either.

Betts says he would have to live for the rest of his life with the shame of having participated in some of the more confronting exercises.

‘It all made me feel really sick’

Betts writes that his first “serious reservations” about the camp began after a compulsory hour-long psychological assessment, conducted over the phone by a person he understood to be a counsellor from the mind-training and leadership specialist group.

“We were told that we weren’t to do the interview with our partners in ear-shot and that the objective of the questions was to build a profile about us that we would work through on the camp,” Betts writes. 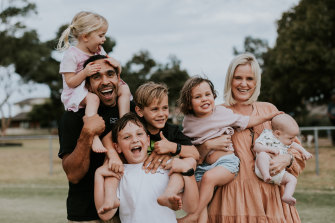 Eddie Betts with partner Anna and their children.

He says he opened up to the interviewer and divulged what he described as private life experiences, believing that it would assist the specialists to appreciate “the cultural complexities” of his life.

“I thought it would be used to build a profile about me that showed obstacles I’ve overcome to be successful and to play AFL.”

The red flag for Betts was when the interviewer tried to gain Betts’ confidence by claiming familiarity with Aboriginal culture: “He tried to make out as though he was like me, as though I should feel comfortable disclosing to him my trauma.”

Then 30 years old, Betts, who was part of the Adelaide club’s senior leadership group, says he was told the camp would do more than just invigorate his game-day performances. “I was told that I would come back a better husband and father, a better teammate and that I’d get a lot out of the camp,” he says.

However, the Wirangu, Kokatha and Guburn man, who is a father of five, says he returned with feelings of shame and humiliation that left him angry, paranoid, secretive and “feeling drained and lethargic”. Betts says the emotional fallout immediately began to harm his family relationships. His partner, Anna, noticed “the extent of my distress”, Betts writes. “Anna noticed I was starting to get snappy at the kids and I started getting really bad anxiety,” he says.

That’s when the couple sat down and spoke about what had happened. 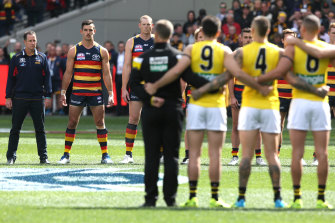 The Crows adopt the ‘power stance’ as they face off against Richmond before the 2017 Grand Final.

The Adelaide Crows began working with the leadership training group midway through the 2017 season, Betts writes.

“This mind training was centred, mainly, around us being ‘warriors’ – things like inner-voice, dominance, mindset.”

Betts was reluctant to buy into these early programs and their “one-size-fits-all approach” over players from diverse backgrounds. As a designated leader, Betts felt he needed to check in on the wellbeing of his younger Indigenous teammates.

After the Crows lost successive games in the 2017 season, Betts says the training group reviewed game videos and claimed they had identified where the playing squad had lost these games. At fault was the way players had run through the supporters’ banner onto the ground, they said.

Another mind-training technique Betts found concerning was intended to emphasise the players’ masculinity. The exercise involved the players forming a circle, making eye contact with one another, and screaming obscenities. Betts says elements of the program make him cringe in hindsight. 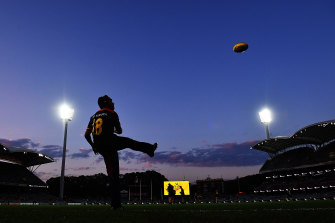 Betts warms up prior to the first preliminary final in Adelaide in 2017.Credit:Getty

“One of the young fullas said to me, ‘I see you as an Uncle. I don’t really like screaming “f— you” at you’. In our culture, from a young age, our older people are a model of respect to our kids and we quickly learn to reciprocate that respect back towards our elders. In my view, some of the younger brothers were getting wala [angry] with these leadership specialists.”

“For me, it didn’t make any sense for the leadership specialists to try and increase my angry man energy, or whatever the f— it was they were after.”

Betts writes that on the eve of the 2017 final series, the mind-training instructors devised and implemented a technique for the team to present itself after it had run through the club banner onto the playing pitch. They called it “the power stance”, Betts says, which meant all 22 Crows players and coach Don Pyke standing with their arms down, slightly away from their sides, in a commanding posture.

Betts says the choreographed stance, which was intended to intimidate the game-day opposition, was even practised at Crows training. The Crows deployed the trick before their qualifying and preliminary finals and came away from each of those games with the win, before slumping to a spectacular defeat in the grand final.

The grand final drubbing at the hands of the Richmond Tigers still haunts Betts, but he says some of that may stem from the techniques deployed by the instructors at pre-season training for the 2018 season. 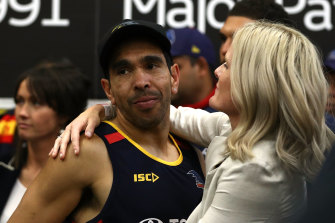 Betts is dejected after losing the 2017 grand final.Credit:Getty

“We had some weird sessions pop up. One consisted of us training while the Richmond club song blasted around AAMI Park while we did a gruelling running session.”

A harness and a knife

The technique geared up again when the squad was flown to a training camp on the Gold Coast in late January 2018, Betts says.

He recalls that the camp began normally enough with routine footy training drills, but soon the team was separated into groups, made to surrender their mobile phones and subjected to what he describes as a barrage of verbal abuse and psychological intimidation involving fake weapons.

According to Betts, players were then blindfolded, loaded onto a bus with papered-over windows and conveyed to an undisclosed location as the Richmond team song played on a loop loudly through the bus’s sound system. When the squad arrived at the secret destination, team members were instructed to remove their blindfolds.

Betts says the first thing they saw was a dozen or so burly men, all dressed in black, greeting them with the power stance.

The welcoming committee laid out the camp rules for the bemused players, Betts says.

“Things like, we weren’t allowed to shower … we had to stay sweaty and smell ‘manly’. We also had to keep what they described as ‘noble silence’,” Betts writes.

Camp life, which Betts’ partner, Anna, later told him was “cult-like”, also involved an “initiation process” for each of the participants, an exercise Betts views as cultural appropriation of sensitive traditional Aboriginal ceremonies.

When the time came for Betts to be “initiated”, he says he was again informed that it would make him a man. He was put into a body harness with a rope attached and told to try and fight his way towards a knife to cut himself free while teammates holding the rope physically obstructed him. The initiation also involved the camp instructors hurling verbal abuse at him, he says.

“Things were yelled at me that I had disclosed to the camp’s ‘counsellors’ about my upbringing. All the people present heard these things,” Betts writes. “I was exhausted, drained and distressed about the details being shared. Another camp-dude jumped on my back and started to berate me about my mother, something so deeply personal that I was absolutely shattered to hear it come out of his mouth.”

At the end of the camp, the players were told that this exercise had provided each other with a safe space and that any issues affecting them were only to be shared with other group members.

“Then we started an exercise that consisted of role-playing our responses to our partners … One of the responses suggested to us was, ‘I feel like a better father and husband, having come from this camp.’” 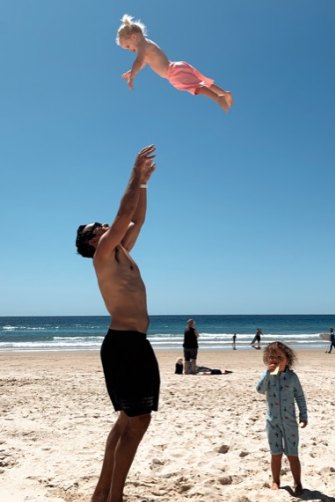 Betts with his family at the beach, one of the photos included in his new book.

But after sharing his experience with his partner, Betts developed an increasingly deeper sense of regret. He also spoke to his Aboriginal elders about some of the co-opted rituals, and the use of sacred and culturally sensitive words that were used at the camp. The conversations led to Betts and his partner approaching the club’s executives with their concerns.

Betts says he wanted to have the program discontinued to protect other Crows players from the same experiences and to establish an internal support network for some of the other players who Betts says were struggling.

“After a meeting with all the Blackfullas at the club, I decided to address the playing group and talk about how I found the camp, mainly addressing the cultural safety implications for us brothers. I sought permission to remove all the Aboriginal boys from any further interactions with the ‘leadership specialists’ and their mind-training exercises. I told the club I wouldn’t be involved in any more mind-training exercises at all.”

Three weeks later, Betts says he was dropped from the squad’s leadership group. The decision devastated him.

“It takes a lot of work for us Blackfullas to prove to other people that we’re capable of leading,” he says.

The Adelaide Crows Football Club declined to comment when contacted by The Age and The Sydney Morning Herald.

The group that ran the camp has previously said it recognises “that some parts of the camp didn’t resonate with some players”. However, it said it had received overwhelmingly positive feedback from players and the club at the time, and that the group would have been “fired in an instant” if the camp had gone as badly wrong as some had suggested.

Betts says the effects on him continued into the 2018 season. His on-field form slumped with the four-time AFL goal-kicker of the year not kicking a single goal until round three. That season, the Crows failed to qualify for the finals series, and Betts says he was left questioning his playing future.

“Personally, I felt like I’d lost the drive to play footy, and to be honest, I’m not sure I ever had the same energy I did before that camp,” he writes.

At the end of the year, Betts left the Crows and South Australia to reunite with the Carlton Blues in Victoria, where he finished his 17-year playing career in 2021 at the club that gave the boy from Boomerang Crescent his debut.

In 2021, a SafeWork SA inquiry made no findings of any wrongdoing against the mind-training specialists.

The author of this article, Jack Latimore, did a “cultural edit” of Betts’ book, The Boy from Boomerang Crescent, published by Simon & Schuster Australia, released on Wednesday, August 3, 2022.

The Morning Edition newsletter is our guide to the day’s most important and interesting stories, analysis and insights. Sign up here.