Only twice in the past two years has a Collingwood player kicked five goals in a game. Both times that player was Jordan De Goey.

De Goey booted five in his most recent game – round seven's win over Geelong, which also happened to be the last time the Pies looked remotely like a premiership contender – and before that in round two last year.

Jaidyn Stephenson kicked five in a game three years ago, his first season. His form has been ordinary for a long time now and he's been dropped for a second time this year.

Jamie Elliott is a dynamic forward who can kick bags but has become a midfielder this year. Brody Mihocek is an excellent supplementary target and has several times managed four in a game. The other tall forwards don't look like coming close.

Josh Thomas booted five goals in a game early in 2018, a year in which he kicked 38 for the season. This year he has kicked four in 10 games.

The disparity in Thomas' figures informs Collingwood's impotence forward of the ball. When they played in the grand final the Pies boasted a spread of forwards like Thomas to carry the scoring load. In 2018 Will Hoskin-Elliott was the difficult, rangy forward who would disarm opponents with hard running and aerial strength but it has been a long time since he has presented any sort of serious scoring threat.

In 2018 Hoskin-Elliott kicked 42 goals. This year, only missing one game, he has kicked nine. Josh Daicos is third on the goalkicking list this year with 10. He plays on a wing.

These stats illustrate the importance, then, of De Goey to a team that works harder to score than any other top-eight team.

Collingwood's chicken-and-egg conundrum with scoring – is it the midfield delivery or the forwards? – is best answered by looking at De Goey's effect on the team.

The Magpies look a different team with him one-out in the forward line. The mids look like they want to move the ball faster because they know what he can do if given a chance.

Jeremy Howe and De Goey have been the two most critical absences for Collingwood this year for different reasons. Adam Treloar, and now that his baby has arrived, Steele Sidebottom, will come back in for the finals should Collingwood make it but while both are important neither is as critical as De Goey.

Opposition teams would consider they have match-ups for Treloar or Sidebottom, for Brodie Grundy or even Scott Pendlebury. But few teams have the player for De Goey if he finds form and touch.

BYE TO SAVE A SEASON
The pre-finals bye will be as consequential to the outcome of this year's premiership as the first bye was in helping the Bulldogs claim their breakthrough flag in 2016.

The concentration of games this season has torn through hamstrings like wet paper. Tiger Tom Lynch and Eagle Jeremy McGovern are the latest in the conga line of stars missing because their bodies gave out under the stress of the packed season.

The bye gives both a chance to be back for the second week of finals, critical for both clubs but especially West Coast which now has the worst injury list of any top side. 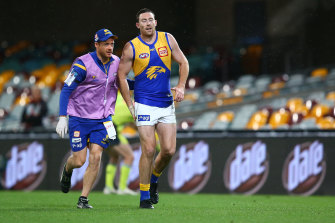 The week off might seem congruous when set against a packed schedule and it looks profligate when considering the extra millions to extend the Queensland hubs by an extra week while the AFL is simultaneously sacking nearly a quarter of its staff. But for the effect on matters on-field the bye will be more critical than even that first year of the bye in the year of the Dogs.

HAWK MESSAGES
Luke Hodge spoke for many when he observed of his old club re-signing his old, old teammate Shaun Burgoyne that he was thrilled for Burgoyne but he couldn't understand the logic of it from a club perspective.

There seemed to be a disconnect between talk of reshaping the list – rebuilds are so last-decade – and looking at fostering the next generation of talent, and then re-signing the oldest player in football for another year.

Shaun Burgoyne has signed on for a 20th season.Credit:Getty Images

"I'm just a little bit confused now about where Hawthorn are heading now with their list," Hodge said.

Burgoyne will blend his role next year between playing and mentoring young players and the cuts to the soft cap make the idea of a player-coach a canny use of soft-cap money.

But Hodge's confusion is understandable. On face value it's hard to reconcile the idea of regeneration of the list for the next flag when a man about to turn 38 is kept on the list.

NICE TOUCH
Putting aside the angst between Carlton and Adelaide over the many high-profile trades between the clubs it was a classy touch for Marc Murphy and Kade Simpson to chair Bryce Gibbs from the ground in his last game. 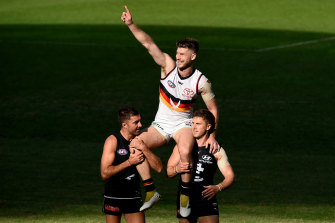 Bryce Gibbs is chaired from the ground by a pair of former teammates.Credit:Getty Images