Michael Schumacher sent a classy thank you message to his Benetton team-mates on this day in 1992 after finishing on the F1 podium for the first time. Schumacher was third only to Williams duo Nigel Mansell and Riccardo Patrese at the Mexican Grand Prix 28 years ago.

Schumacher, who went on to become the most-successful driver in F1 history with 91 Grand Prix wins and seven World Drivers’ Championship titles, had qualified in third in Mexico.

And the German managed to fend off McLaren’s Gerhard Berger, who had earlier leapfrogged his Benetton team-mate Martin Brundle to put some pressure on the race leaders.

Schumacher’s third-place finish was his first podium in what turned out to be an illustrious career at the top level of motorsport.

And, footage newly unearthed by F1, the racing legend’s classy side shows through as he makes special mention of all the people who made his podium-finish possible.

“I’m really happy about the third place,” Schumacher said. “I didn’t expect, really, the third place, because I knew that the McLaren was quite quick in the warm-up with full tanks and I knew they will be quicker in the end of the race.

“But it was like this. I could hold Berger. The whole race, the distance was still the same, between nine and 10 seconds. But in the end, I was pushing quite hard because Berger closed up once to eight seconds.

“It was a really hard race, but I wasn’t pushing too hard from somebody behind me. From this, I really have to say [to] the Benetton team, a really great thanks because they have done, or we have done, a great job this weekend.”

Schumacher finished third in the World Drivers’ Championship standings in 1992, picking up eight podiums in total and securing his maiden Grand Prix win in Belgium that August. 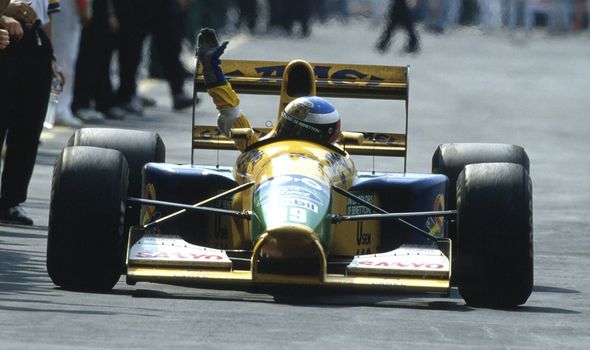 Schumacher’s first F1 title followed in 1994 and he managed to retain the trophy a year later while still driving for Benetton.

Schumacher moved to Ferrari in 1996 and with them won five of his seven championships in consecutive years from 2000 to 2004.

His records remain unmatched but current reigning F1 champion Lewis Hamilton might equal them this year.

The Mercedes driver requires seven race wins to go level with Schumacher and he is just one title away from matching his haul.

Hamilton’s latest title defence has been delayed, however, with the coronavirus pandemic seeing the first seven races of the 2020 season called off and the start of the campaign pushed back until June at the earliest.