Valtteri Bottas’ hopes of a late-season challenge to Lewis Hamilton for F1’s world championship suffered a potentially knockout blow after a rare bout of Mercedes unreliability forced his retirement from the Eifel GP.

Bottas’ quest for the first back-to-back wins of his career two weeks on from his success in Russia a fortnight ago started well enough from pole position, as he impressively fought off a fast-starting Hamilton out of Turn One and led the early stages of the race.

But his race unravelled in the space of six laps.

On lap 13, Bottas was overtaken by Hamilton after running wide at the first corner and then, soon after pitting with flat-spotted tyres, retired when a power unit struck his W11.

Hamilton’s win and Bottas’ no-score means the Finn slips 69 points behind his team-mate with just 156 points left to play for in the final six races.

“Unlucky. What can I say?” said a philosophical-sounding Bottas to Sky Sports F1. “During the VSC [Virtual Safety Car] I started to lose power and it never recovered. It was quite a big loss of power so something to do with the power unit.

“It was good fun until then.”

After beating his team-mate to the pole on Saturday by an unusually-large two tenths of a second margin, Bottas was challenged by Hamilton at the start but held his ground on the outside of Turn One to stay ahead of the sister Mercedes into the second corner.

“We had a good battle,” explained the Finn. “There was no way I was going to let it [be] easy for him. I’m glad I could maintain the lead.

“Obviously then later on I had the lockup into Turn One so I lost the position but it meant I stopped early and the new tyres were started to feel pretty good.

“So I had no doubt I could carry good pace and probably undercut [Hamilton].” 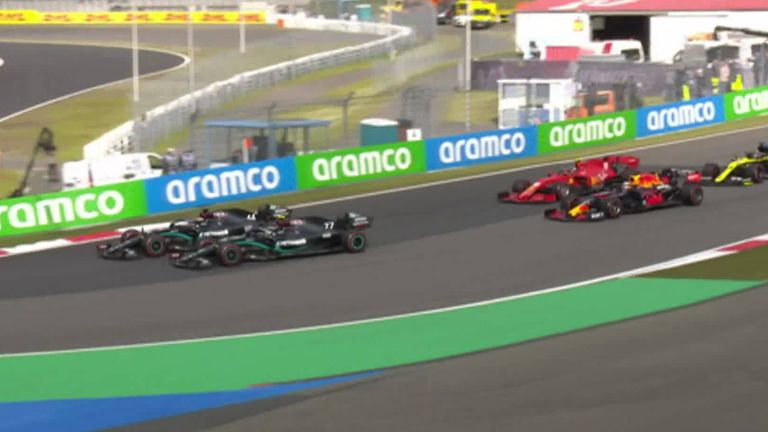 On going wheel-to-wheel with Hamilton at the start

“Lewis is ahead going into the corner and Valtteri does an amazing job with sticking it out on the outside and then putting his foot down even when he’s off the track, and taking the position back.

“Awesome driving. I think I tried that in my time against Lewis and I always lost out. You don’t go around the outside of Lewis Hamilton!

“They have never touched in four years of being team-mates and today was the first time I’ve really seen Bottas hold against him. So let’s hope he’s going to deliver more of that because that’s what we need.”

“Valtteri made that mistake that he just can’t allow himself to make against Hamilton. You have to keep it perfect. He had graining on the front tyre, ran wide and Lewis took the lead.

“Lewis was in the ropes after qualifying yesterday, and even more so after Turn One. He was back in he ropes, Valtteri was swinging at him and then he made that mistake into Turn One.

“That’s the end of it. Lewis’ confidence is completely back and Valtteri is game over again as he knows he messed it up there. Valtteri needs to try once more to get back at Lewis and we all know how difficult that is.” 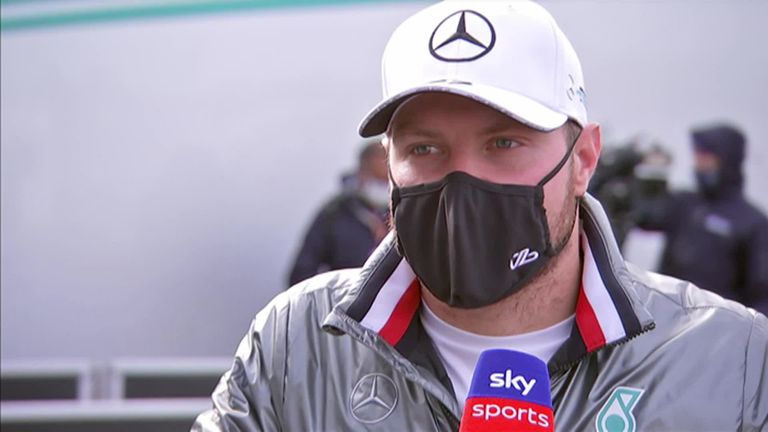 Mercedes to look into engine problems

Having introduced fresh engines on both their cars at the Nurburgring, Mercedes boss Toto Wolff said investigations would begin as to what went wrong on Bottas’ after their first mechanical retirement from a race this season.

“I was a concern today because we don’t know the root cause yet,” admitted Wolff.

“We have introduced new power units this weekend and in that respect we were even sure if we could finish the race.

“We need to analyse the root cause and the guys in Brixworth are a fantastic group of people. They are pushing the boundaries all the time and it’s why these things can happen.”