Lewis Hamilton MUST hit back against Max Verstappen at Silverstone to end Red Bull domination, Lando Norris earned respect of F1’s elite and on-track penalties have gone too far… EIGHT THINGS WE LEARNED FROM THE AUSTRIAN GRAND PRIX

Sunday’s Austrian Grand Prix won’t go down as a classic race but it could be remembered as a significant event in the 2021 Formula One season.

Max Verstappen once again dominated around the Red Bull Ring, winning at the venue for the second weekend running and for the fourth time in the last five grands prix to build a massive 32-point gap over Lewis Hamilton in the world championship.

While there was little drama for the Dutchman to contend with at his Red Bull team’s home race there was plenty to take away from the event as Sportsmail looks at the things we learned from the Austrian Grand Prix.

While the notion of Red Bull getting the better of Mercedes is no longer a surprise in Formula One, their winning margin at the Austrian Grand Prix has raised alarm at the Silver Arrows of just how great their advantage is.

Verstappen led every lap and had built up over a 20-second margin to second place Valtteri Bottas, before pitting for new tyres in a bid to successfully set the fastest lap late on.

Lewis Hamilton admitted his team were ‘miles away’ from their chief title rivals and that unless Mercedes could find significant upgrades ‘this will be the result most often.’

For Red Bull they are in with their best chance of ending their eight-year long drought for either championship and ending Mercedes’ dominance of both in the process.

Verstappen’s lights to flag victory also saw him take fastest lap and pole position to give him his first F1 grand slam and a huge 32-point lead over Hamilton in the championship.

Already he has a race winning margin in points over Hamilton and while there is still a long way to go in the title race with many twists and turns still to come, never before have Mercedes looked so vulnerable to losing their grip on the world championships they have had an iron grip on since 2014. 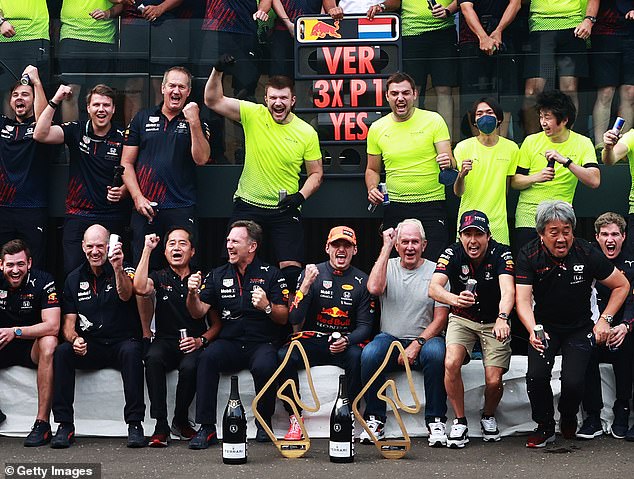 The Red Bull team celebrate victory in the paddock on Sunday evening, with Verstappen (centre bottom) having now won the last three races of the season

Hamilton must hit back at Silverstone

For much of the last seven years, the British Grand Prix had been a summer a festival where fans flocked to see one of the biggest races on the calendar and then go home happy after watching Hamilton win.

But when 140,000 return to the grandstands in two weeks for the British Grand Prix they will be hoping rather than expecting Hamilton can take the fight back to Verstappen in the world championship.

Mercedes have now lost five races in a row, with four of them won quite convincingly by Verstappen who was also set to win the Azerbaijan Grand Prix before a late tyre failure robbed him of success.

The back-to-back victories in Austria in the last couple of races have been headlined by just how dominant Red Bull have been, but this sort of advantage can swing from circuit to circuit.

Mercedes have traditionally gone well at Silverstone, which is effectively a home race for the German team, with their factory based in Brackley just a few miles down the road from the track.

Either way, Hamilton will be hoping to improve on his Austria showing where he admits he could only settle for an ‘easy second’ to Verstappen before mechanical troubles forced him to limp home fourth. 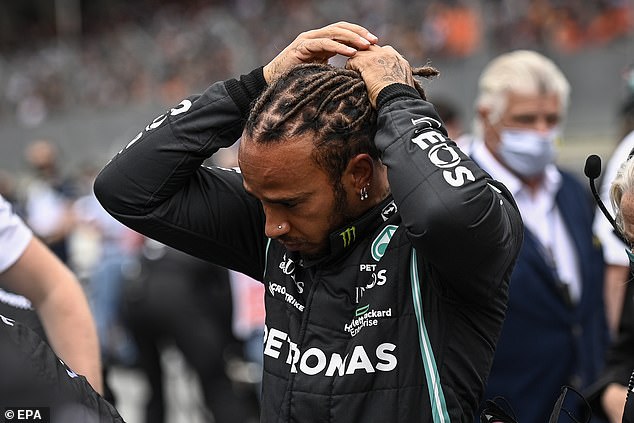 Another common sight this season is watching Lando Norris take the fight to Mercedes and Red Bull in his far inferior McLaren.

Sunday’s excellent drive made it three podiums this season and only once in the opening nine races as he finished outside the top five.

Already he has 100 points and so consistent has his driving been this term that not only is he ahead of Valtteri Bottas in the world championship but he is also just three points behind third placed Sergio Perez – both in supremely superior cars.

Norris being one of Formula One’s brightest talents heading into the future has been known for a long while now but even Hamilton was left impressed by his drive at the Red Bull Ring.

Norris qualified a sensational second, just missing out on his first F1 pole to Verstappen, and was then forced to hold off a rampaging Hamilton for the first few laps.

Although the world champion eventually got past around 20 laps into the race, he could not help but radio into his Mercedes team in full praise for his British compatriot, saying: ‘Such a great driver, Lando.’ 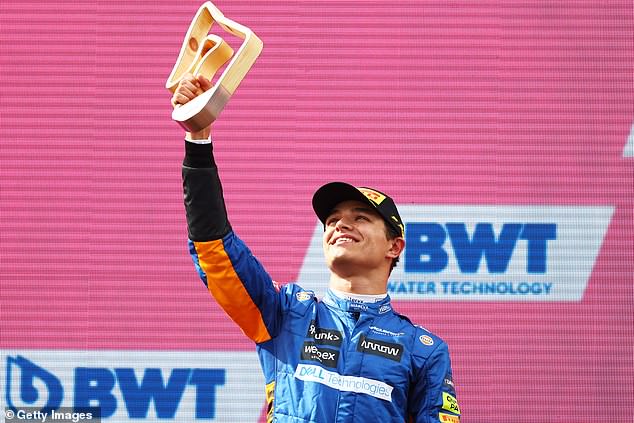 Fans have been greatly missed

Although the Austrian Grand Prix on Sunday won’t go down as a classic, it was an incredible sight to see 132,000 spectators take to the circuit as F1 hosted an unrestricted race for fans to attend for the first time since the coronavirus outbreak.

It happened to coincide with a venue which usually attracts a large proportion of Verstappen fans, and that meant a wonderful sea of orange in the stands through clothing and flares as they cheered the Dutchman on to victory.

Silverstone will likely top these numbers with 140,000 when supporters return for the British Grand Prix in two weeks which in the past has seen Hamilton celebrate with supporters after race wins through crowd surfing.

In truth, F1 is one of the sports least affected by the loss of supporters once a race is on – at least from the majority of viewers watching a race via a TV feed as much of a race’s ambience is delivered by the sound of the cars.

But in a sport which can struggle to bridge an accessible gap between its stars and fanbase, welcoming spectators back to the track so they can get closer to the cars and the drivers they admire is a significant step in the right direction. 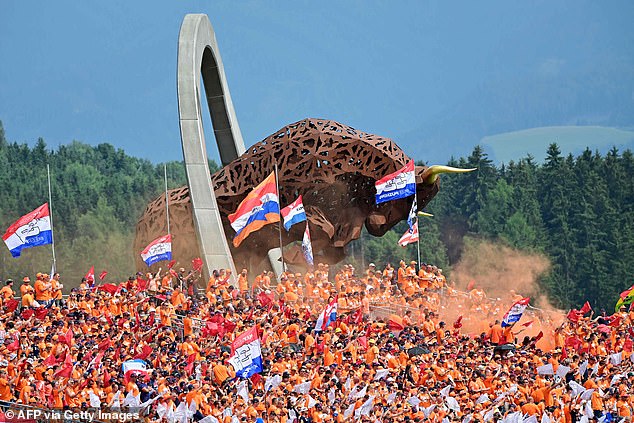 Over 130,000 fans packed into the Red Bull Ring, with many present to cheer on Verstappen

Williams luckless as well as pointless

George Russell was incredibly unfortunate to miss out on a points finish at the Styrian Grand Prix before Sunday when running a comfortable eighth his Williams machinery suffered terminal mechanical problems.

It looked like the talented Brit’s luck was starting to turn on Saturday though when at the same venue he made it into the top 10 of qualifying before starting from eighth in Sunday’s Austrian Grand Prix.

Although his poor start saw him slip out of the points straight away, the 23-year-old battled back and in the latter stages of the race was running tenth and in with a chance of claiming his first world championship point for the team.

Russell broke his points duck last season with a one-off race for Mercedes, but Williams have now gone two years without a top 10 finish and were desperate for a change of fortunes.

But as the laps ticked down so did the pressure from two-time world champion Fernando Alonso increase.  Eventually with just three laps left, the Spaniard forced his way past the crestfallen Russell to take 10th, who after the race apologised to his team for not being able to hold on and end their barren run.

He said over the radio: ‘Ah, sorry guys I did everything I could. Wasn’t enough today, Alonso was just too quick.’

His team though were quick to retort, praising his efforts: ‘No don’t apologise that was mega, that was really, really good So good.’ 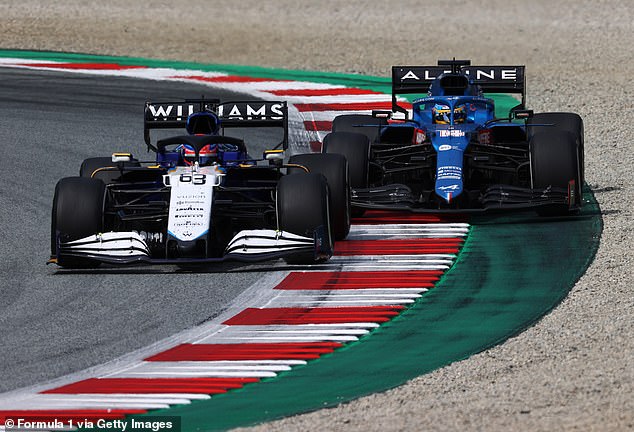 On-track penalties have gone too far

If this year’s Austrian Grand Prix will be remembered for one thing, it will be the amount of curious penalties that were handed out to drivers.

Lando Norris and Sergio Perez (twice) were given five-second time penalties following incidents on the track where they appeared to do little more than hold their ground while defending their position.

Ironically Perez was the victim in Norris’s penalty when he ran wide trying to pass around the outside of turn four, while the Brit did little more than take a racing line through the corner.

Norris said of his penalty: ‘I was just racing, really. He tried to go around the outside, which was a bit stupid, and he ran off the track himself.’

Perez was then guilty of doing the same thing at the same corner to Ferrari’s Charles Leclerc later in the race, and again a few laps and a couple of corners later to the same driver.

It’s a troubled road that stewards are going down in penalising aggressive but defensive moves which have for many years in F1 been acceptable up until Sunday.

Looking further ahead, such precedents could see drivers taking an F1 equivalent of diving in football. An example being, taking to a tarmac run-off area then complaining of being forced off by the driver in front leading to them getting a penalty.

A relaxation of the rules is needed when drivers go wheel-to-wheel otherwise we may as well just watch time trial rallies every other weekend. 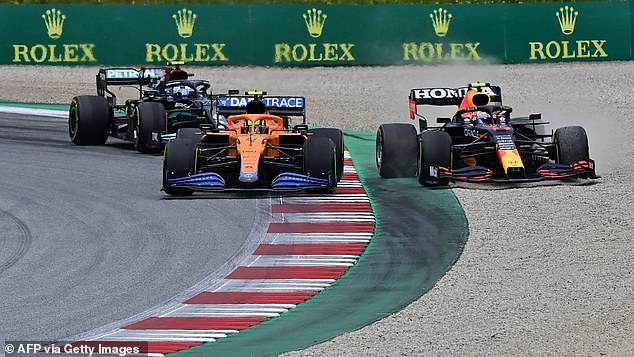 Tsunoda’s errors embarrassing even for a rookie

There are rookie errors you would expect from any driver competing in their first year of Formula One, but sometimes even the ‘it’s my first day’ excuse just doesn’t wash.

Yuki Tsunoda made one such rookie error at the Red Bull Ring when he was penalised for crossing a white line on entry to the pit-lane, when pre-race briefings made it a strict instruction not to do so.

While the error alone is a cardinal sin for an F1 driver given no advantage can be gained from crossing the white line, the Japanese star in his first season could be let off for a rare breach.

But to make exactly the same mistake again later in the race was unforgivable  and in total cost him two five-second penalties which while meant little given his 12th place finish and distance to the top 10, could have had much more serious consequences had he been running further up the order.

There is talent in Tsunoda but he is has been wildly inconsistent this term and is struggling to match the constant points scoring of his admittedly more experienced and settled team-mate Pierre Gasly.

Sunday only strengthened a case that he had been called up to AlphaTauri, following a promising season in F2, a year too soon. 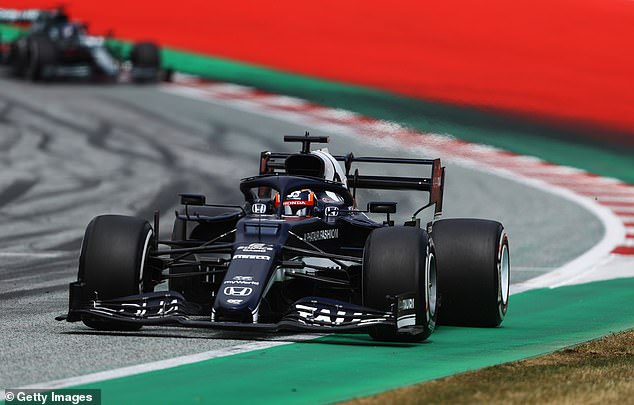 Sainz taking the fight to Leclerc at Ferrari

One of the season’s most interesting team-mate battles is coming at Ferrari where so far Carlos Sainz has stood his ground after coming into a team which in recent times had become a Charles Leclerc stronghold.

Leclerc has been a sensation at the struggling Italian team in recent years, wrestling the status as No 1 from four-time world champion Sebastian Vettel and in doing so bookmarking himself as a world champion for the future.

In fairness to the Monegasque, he has continued to produce good quality drives this term which underline that status.

The Spaniard has gone under the radar since his 2015 debut, but during this period he has had high quality team-mates including Max Verstappen, Lando Norris and now Leclerc and against all of them he has looked, at the very least, competitive.

He has now earned the trust of Ferrari too. On Sunday, and on a superior strategy to Leclerc he was allowed to pass his team-mate to challenge Daniel Ricciardo’s McLaren for position.

After making the move stick he then limited a gap to Sergio Perez to benefit from the Mexican’s time penalty and finish the race in a highly credible fifth place.

There are just two points between him and Leclerc in the world championship and he continues to prove himself as one of F1’s top drivers. 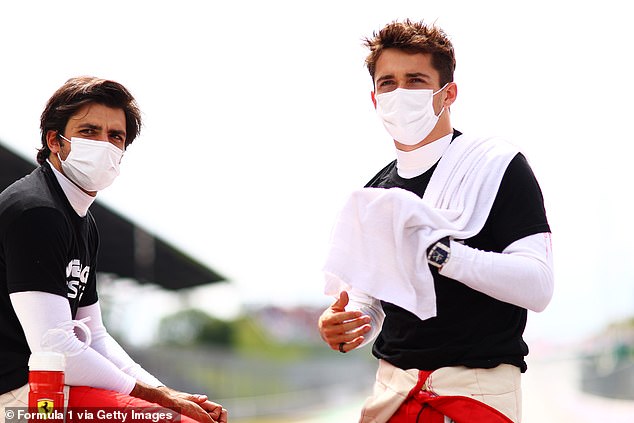