Melbourne youngster Oscar Piastri has taken a giant step towards securing a seat in Formula One after clinching a deal with the Alpine team to be its reserve driver next season.

The reserve position means that the 20-year-old will be a key part of the team, testing the F1 race car throughout the year and running it in practice sessions on a handful of weekends during next year’s championship.

Piastri, who is the current F3 world champion and is favourite to win this year’s Formula 2 title when the series finishes in Saudi Arabia next month, has long been regarded as one of the brightest emerging talents in the Grand Prix arena.

His latest career move could, within the next 16 months, see him line up on the same F1 grid as countryman Daniel Ricciardo, who currently drives for McLaren. 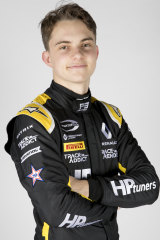 Alpine may be an unfamiliar name to casual Formula 1 observers, but it has a long and storied history in the sport in the guise of its parent company, Renault.

Piastri has been a member of the Alpine driver academy since 2020, and will now be earmarked for a full-time race seat, probably in 2023.

Alpine’s current drivers are Frenchman Esteban Ocon and Spain’s two-time world champion Fernando Alonso, who is now in his forties and is out of contract at the end of next season.

“I’m super excited to be joining Alpine F1 Team as reserve driver in 2022,” Piastri said in a short video tweeted by the Alpine official account.

In a media statement on the Alpine team website he added: “I’ve proved myself in the junior formulas over the last couple of years and feel like I’m ready for Formula 1 now. Along with the trackside experience at race weekends, we will put together a substantial test programme in order to keep developing myself to grow even more prepared for a race seat. I’m very thankful to Alpine for their support.

“My focus now is finishing the Formula 2 Championship in the best possible way with Prema (his F2 team) and I’m looking forward to being back in the car and pushing hard on track.”

In a statement, Alpine CEO Laurent Rossi said: “Oscar’s natural talent is clear to see, so we’re very proud and privileged to have him as part of our team as our Reserve Driver from next year.

“Not only does Oscar have the on-track skills, as demonstrated over the last couple of years in the junior categories, but also the maturity and composure that makes him really stand out from the rest.

“At Enstone (Alpine’s UK base) he has been a real asset to the team as he has aided the simulator and testing programme, and I am certain he will continue to do so in his new role. The next step will be to consistently attend Grands Prix to fully integrate with the race team, learn what is expected of an F1 driver, and be ready for when the opportunity comes.

“In addition, we look forward to having Oscar’s input and expertise in driving the team forwards next year.”