George Russell was caught speeding in the pit lane just moments before the start of the Singapore Grand Prix, leading to Mercedes being issued with a £90 (€100) fine. Russell would have fancied his chances coming into Sunday’s race with Mercedes showing good pace in free practice.

He would have hoped to at least match his team-mate Lewis Hamilton, but suffered a throttle problem in Q2 and wasn’t able to make it through to the top 10. That seemingly led to Mercedes’ decision to change his power unit on Sunday morning, forcing the Brit to start from the pit lane.

The Singapore Grand Prix is notoriously a hard track to overtake on, suggesting Mercedes had already conceded defeat on his chances of a strong points finish. But Russell’s weekend went from bad to worse as he was caught speeding in the pit lane on his way to the track.

The FIA took the immediate decision to hand Mercedes with a fine of £90 just minutes before the start of the race.

The statement read: “Car 63 exceeded the pit lane speed limit which is set at 60 km/h for this Event by 0.6 km/h. Competitors are reminded that they have the right to appeal certain decisions of the Stewards, in accordance with Article 15 of the FIA International Sporting Code and Chapter 4 of the FIA Judicial and Disciplinary Rules, within the applicable time limits.”

Mick Schumacher had also fallen foul of the strict pit lane speed limits by just 0.1 km/h on Saturday. Haas were similarly fined £90 for a breach of Article 34.7 of the FIA F1 Sporting Regulations. 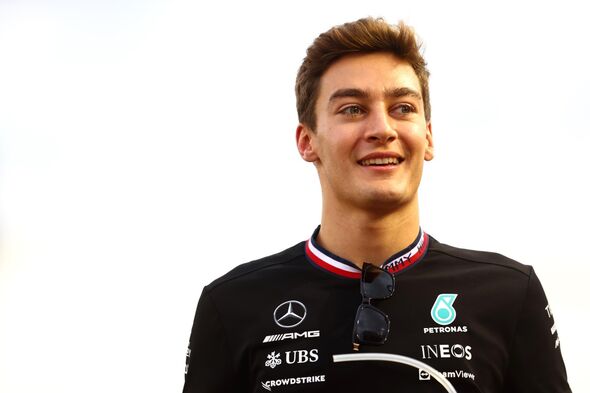 Torrential downpour at the Singapore Grand Prix delayed the start of the race by an hour. After the rain had cleared, track marshalls were out trying to clear all the standing water before teams were given the all clear to take to the track.

There was initially a mixed bag from all the drivers and which tyre they chose to warm up on. Only a handful of drivers had selected to go with inters as certain sections of the track still appeared extremely wet.

Max Verstappen gave a glimpse of the treacherous conditions when he went off the track at Turn 7 down the escape road. But all teams ended up choosing to start the race on intermediates to the surprise of some given how slow the track was drying up.