F1 preview: A lap of the Hungarian Grand Prix

Max Verstappen screamed at Red Bull in a team radio meltdown after suffering issues in qualifying for the Hungarian Grand Prix. The reigning champion shouted and swore over the microphone as mechanical failure stopped him challenging for pole.

He demanded his team “fixed” the issues with his car in an angry tirade despite his commanding positon in the championship.

He said: “No for F***. Try to fix this issue.” Verstappen locked up on his first flying lap in Q3 which only put him seventh fastest.

However, the Dutchman then complained of a lack of power moments before starting his final qualifying lap. It means he was unable to go faster and dropped down to tenth as everyone else improved.

After qualifying, team boss Christian Horner confirmed Verstappen’s issue was a power unit related problem. He added Red Bull could have had a chance at securing a top-two start had it not been for the issue.

He added: “He was obviously trying to reset sensors and so on to cure it but unfortunately it wasn’t to be.

“No representative time in Q3 for Max and 10th and 11th on the grid so it is going to be a busy race tomorrow but congrats to George Russel on his first pole, that was a pretty tidy lap.”

The result is a boost for Charles Leclerc’s title hopes with the Ferrari star 63-points behind ahead of the Hungarian Grand Prix. But, the Monageasuq finds himself off the front row after being pipped by the Mercedes of George Russell and Carlos Sainz.

However, Leclerc refused to get carried away when asked whether Verstappen’s failure made any difference to his qualifying session. He said: “I mean, mostly we are focusing on ourselves. 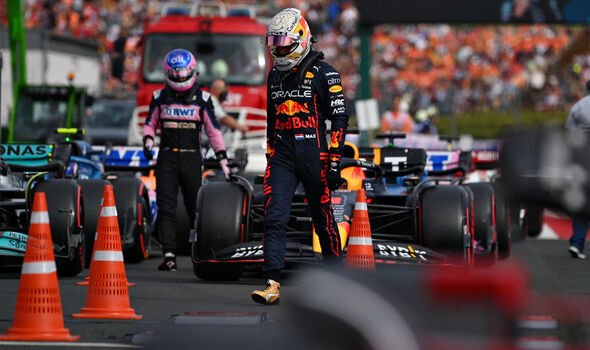 “Today has not been a great day and I have struggled with the tyres and I have had inconsistency getting the tyres in the right window. So I struggled to put a lap together.”

Since Verstappen retired form two of the first three races, Red Bull have not suffered from many mechanical failures. Instead, Ferrari have suffered much of the issues with Leclerc being forced out of three races while leading this season.

Red Bull suffered a double blow with Sergio Perez getting knocked out during the second part of qualifying. The Mexican had a confusing session with one of his flying laps deleted and then reinstated.

However, it appeared Perez didn’t have the pace to challenge towards the front at any stage this afternoon.