Max Verstappen conceded Red Bull were just “too slow” to compete with Lewis Hamilton and Valtteri Bottas at the Styrian Grand Prix. Hamilton put in a sensational lap in qualifying on Saturday to put his car on pole for Sunday’s race.

Verstappen ran the Briton close and was hopeful of challenging in the race from second on the grid.

But Hamilton got the better start and he never looked back as he dominated the race from start to finish.

Verstappen looked as though he may have split the Mercedes up until the last few laps.

Front wing damage allowed Bottas to close in and despite some brilliant defending from Verstappen, the Finnish driver eventually made his move stick.

JUST IN: Ferrari chaos in opening lap of Styrian GP as Vettel and Leclerc

It’s still a vast improvement from last Sunday when Verstappen retired from the race early with a suspected electrical issue.

But Verstappen is not happy with playing second fiddle to the pace of both Mercedes cars.

“I tried but we are just a bit too slow,” he told Sky Sports.

“I pushed as hard as I could. 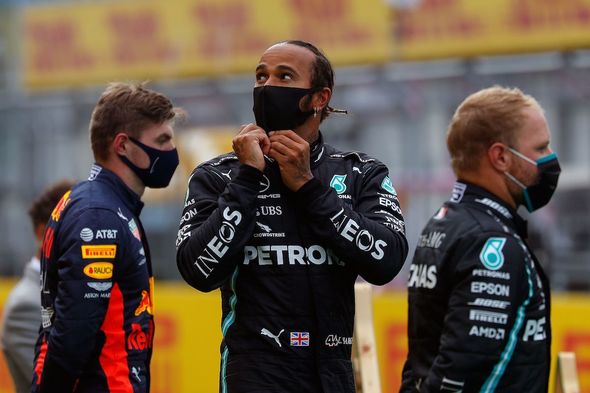 “When Valtteri was trying to pass me, I tried to go off track to make it a bit difficult.

“I knew he was going to get by one lap later but it was at least fun because the rest of the race was pretty boring.

“A podium is good but still a lot of work to do.”