Max Verstappen insisted there’s no score to settle with Lando Norris after this week’s iRacing crash before joking the chances of his Red Bull and the Brit’s McLaren being close together on the real-world track are remote. Verstappen and Norris have swapped their F1 cars for esports racing rigs with the 2020 season delayed due to the coronavirus pandemic.

Both drivers took part in simulator races last weekend, with Verstappen competing in the The Race All-Star Esports Battle and Norris driving in Not the AUS GP, which was hosted by Veloce Esports.

Verstappen and Norris then faced each other in Porsche Supercup cars on the Daytona circuit on the online iRacing platform.

Norris caused Verstappen to fly into the wall during their battle for the lead, with the McLaren driver going on to win the race as the Red Bull man fought his way back up the field.

Verstappen has now lifted the lid on how the iRacing crash, which put paid to his hopes of another victory in the world of esports, happened.

“But that happened accidentally,” Verstappen told Dutch broadcaster Ziggo Sport. “He wanted to push me, but that Porsche is very difficult. The splitter came under the floor of the car and then I crashed.

“I think he was a bit in shock afterwards. Immediately after the game he said to me: ‘sorry man’. But hey, things like this can happen. It is mainly laughing with each other, they are nice games.”

Verstappen then took the opportunity to aim a cheeky dig at Norris, who ended the 2019 F1 season 11th in the drivers’ standings compared to the Dutchman’s third-place finish.

Asked if there will be a ‘bill to be settled’ when the real-world racing resumes later this year, Verstappen said: “Haha, no. And they start behind us anyway so that will be fine.” 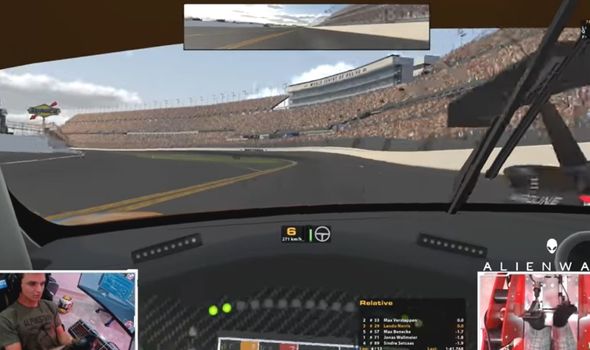 Verstappen also offered an insight into why he and Norris can do the business in esports whereas some other real-world drivers cannot.

“Well, you just have to drive a lot to be competitive,” Verstappen said. “And you also need to have a little understanding of the set-ups.

“[Esports racer] Rudy [van Buren] is very good at that, for example. And some other drivers may just be less at it.”

Verstappen and Norris have plenty of esports driving ahead of them with the coronavirus pandemic seeing the start of the 2020 F1 season delayed until at least the Azerbaijan Grand Prix on June 7.