Ferrari team principal Mattia Binotto may have given George Russell the perfect route to sealing a seat at Mercedes with his comments on Lewis Hamilton. The 2021 driver grid will see a number of changes with both Ferrari and Red Bull switching out two of their drivers.

Max Verstappen will now be joined by Sergio Perez at Red Bull while Sebastian Vettel has been replaced by Carlos Sainz at Ferrari.

Mercedes though will stick with the same line-up from the previous four years with Hamilton and Valtteri Bottas – although the former is yet to sign a new contract.

Negotiations between Hamilton and Mercedes only started after the Abu Dhabi Grand Prix with both parties insisting they didn’t want to talk about a new deal during the season.

Hamilton and Mercedes have both maintained the same stance that signing a new deal has never been an issue, but it’s not the first time there have been some doubts about the Briton’s future.

Back in 2019, Hamilton held talks with Ferrari sparking speculation of a potential switch from Mercedes for the 2021 season.

The British racing superstar did little to quash the rumours as he spoke up his admiration of Ferrari at the time.

Fast forward a few months though and Charles Leclerc was signed up to a long-term deal and an agreement was in place for Sainz to replace Vettel for 2021.

In Vettel’s final season in the famous Prancing Horse, the team fell below expectations as they had to settle with battling in the midfield.

Things may have been different had they struck an agreement to bring Hamilton on board for 2021.

But Binotto insists there are no “regrets” about missing out on Hamilton, insisting Leclerc and Sainz can both challenge the seven-time world champion.

“I don’t think there will be regret because at the end when we took some decisions, we took them thinking they were the right decisions and today we have a fantastic driver like Charles where we invested a lot as Ferrari,” Binotto told Sky Sports.

“I think he’s got a lot of talent. If he’s got the right car, I’m pretty sure he can challenge Lewis Hamilton. 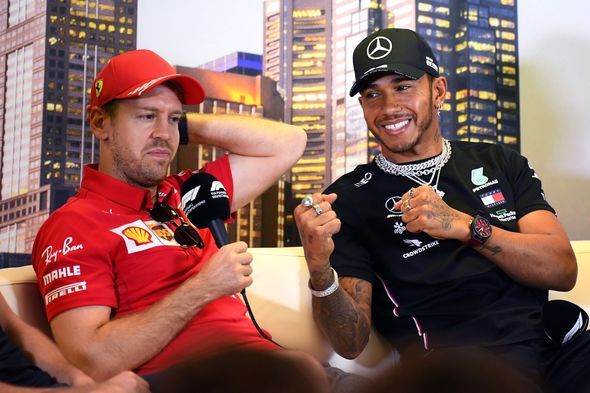 “We’ve made our choices, and I think together with Carlos we are very strong. I don’t think there will be any regret.”

The Finnish driver will be under pressure this season more than ever to push Hamilton closer in the title race with Russell being tipped to replace him at Mercedes in 2022.

And the young Williams driver may well be hoping Ferrari can fulfil Binotto’s hopes by pushing Mercedes on the track again.

If Leclerc is able to challenge at the front of the grid on a regular basis and Bottas fails to deliver then that might force Mercedes into making a change next year with Russell primed and ready.