Ferrari fans were in red heaven at Albert Park on Friday afternoon when its two drivers Carlos Sainz and Charles Leclerc proved the pace of the field in the first practice session for the Australian Grand Prix.

It was the first time the Formula One cars had been on the track at the Albert Park circuit for three years, and supporters of the sport’s most popular team could relish the moment more than any others.

Sainz, the Spaniard who has finished second and third in the first two races of the season in Bahrain and Jeddah, was quickest, his time of one minute, 19.806 seconds more than half a second quicker than his Monagasque teammate Leclerc.

As expected, the squad that gave them the most trouble was Red Bull, whose two drivers, Sergio Perez and world champion Max Verstappen, were third and fourth quickest.

Perez was fractionally slower than Leclerc but three-tenths faster than Verstappen.

It was a more encouraging session for the McLaren team of local hero Daniel Ricciardo than the two previous races this season.

Ferrari’s Carlos Sainz was fastest in the first practice session on Friday.Credit:Getty Images

Lando Norris was fifth quickest in the first practice session with 1:20.878. Ricciardo, who is still coming to grips with the car in his second season with the team, posted a 1:21.155, less than 0.3s behind the Englishman.

They were sandwiched by the first Alpine, driven by Esteban Ocon (sixth), with Lewis Hamilton (1:21.027) seventh and the best of the Mercedes. The top 10 in the first session was rounded out by Fernando Alonso in the second Alpine and Valtteri Bottas in the leading Alfa Romeo.

This was an important session for all the drivers as it gave them their first real chance to get to grips with the new Albert Park circuit which has been reconfigured and also resurfaced since Bottas won in a Mercedes in 2019.

The lap times are now much quicker as a result, but the teams who have shown the way during the season so far are leading the way again with Sainz putting down a marker to show his teammate, who currently leads in the drivers’ championship standings, that he is a real threat in the race itself. 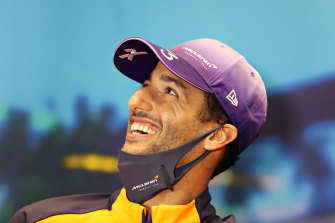 There were promising signs for Daniel Ricciardo in the first practice session.Credit:Getty Images

That is also the situation at Red Bull, where Perez – desperately unlucky not to finish on the podium in Saudi Arabia having qualified on pole position – took the opportunity to show that even if Verstappen is the world champion he can provide him with plenty to think about in the race itself.

Sebastian Vettel, the former1 world champion and winner of the Australian Grand Prix in 2018, returned to action having missed the first two events of the season with COVID-19, but it was not a happy outing as the engine in his Aston Martin broke down, leaving him marooned on the side of the track.

For fans starved of track action there was plenty to see as the session was stopped twice by two red flags – one for Vettel’s engine failure, another for Perez losing some debris, while stewards are looking at a couple of incidents during the afternoon.