Ferrari hero Ross Brawn has admitted his old team have a “long road ahead of them” to get back to the top of F1 following a nightmare weekend at the Styrian Grand Prix. Sebastian Vettel and Charles Leclerc only qualified in 10th and 11th respectively for Sunday’s race.

To compound matters, Leclerc was then handed a three-place grid penalty for impeding AlphaTauri’s Daniil Kvyat during extremely wet conditions in qualifying.

Ferrari will have gone into the race itself optimistic that their newly rushed-through upgrades would quickly help them move up the field on Sunday.

However, their hopes were soon dashed after Vettel and Leclerc collided when the youngster attempted an audacious overtake on his team-mate on Lap One.

Brawn, who played a key role in Michael Schumacher’s success at Ferrari in the early 2000s, has bemoaned the incident, which led both SF1000s to be retired inside three laps.

“The Styrian Grand Prix was another sensational racing spectacle with battles throughout the field – but it was a race weekend to forget for Ferrari, with their drivers committing a cardinal sin by colliding and forcing both cars out of the race in the opening laps,” Brawn wrote, in his column for Formula1.com.

“As a team boss, you never want to see that happen, but this will hurt Ferrari even more given they had worked hard to bring their upgraded aerodynamic package to Austria a week ahead of schedule – and the collision between Sebastian Vettel and Charles Leclerc has robbed them of a chance to analyse the new package.

“Charles was very good in accepting the blame for the accident but it doesn’t help. That said, it’s sport and these things can happen – and now it looks like the engineers back at the factory have a lot of work to do.”

Brawn, who is now managing director of motorsport at F1, knows all about being under the spotlight at Ferrari thanks to his time with the Italians.

How the Styrian Grand Prix went wrong for Ferrari

Sebastian Vettel drops hint over walking away from F1 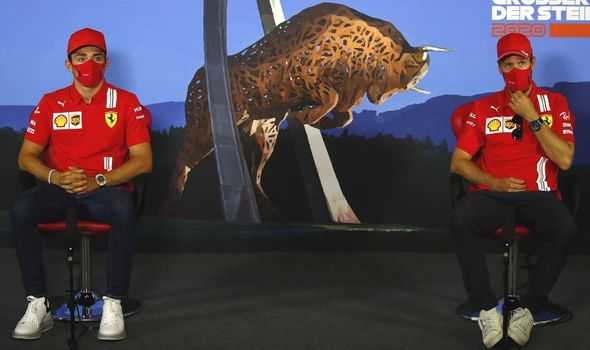 And he has warned there will be no quick fix as F1’s most illustrious team attempt to close the gap on pace-setters Mercedes and Red Bull.

“One of the biggest problems for Ferrari is that of all the teams on the grid, they come under the closest scrutiny from the media, particularly in Italy,” Brawn said.

“I know from my own experience that the media pressure in Italy can be incredibly intense, and you have to make sure it doesn’t get to your people.

“The management have to cope with it and make sure the staff maintain the faith and stay focused on what needs to be done. They aren’t going to turn it around overnight, and there’s a long road ahead of them.