Sebastian Vettel is set to spark a massive driver merry-go-round when he leaves Ferrari at the end of the season and Fernando Alonso has hinted that he could return to F1 should a seat become available.

Alonso left F1 at the end of the 2018 campaign to focus on trying to win the Indy 500 which would enable him to complete motorsport’s Triple Crown.

The 38-year-old did not fully retire from F1 after his contract with McLaren came to an end.

And Vettel leaving Ferrari could open the door for the Spaniard’s shock return.

McLaren star Carlos Sainz is expected to replace Vettel at the Prancing Horse and in turn Daniel Ricciardo will step into Sainz’s shoes.

That will leave a free seat at Renault which Vettel could fight for – if he decides he does not want to retire.

However, Alonso has hinted he could return to his former team Renault, with whom he won two Drivers’ Championship during his four-year stint from 2002 and 2006.

After news broke of Vettel’s announcement Renault posted two photographs on Twitter of Alonso winning the Championship in their colours.

And Alonso was quick to reply with the devil emoji sparkling a fan frenzy that he is set to return.

That was not the two-time world champion’s only activity on social media over the last 24 hours. 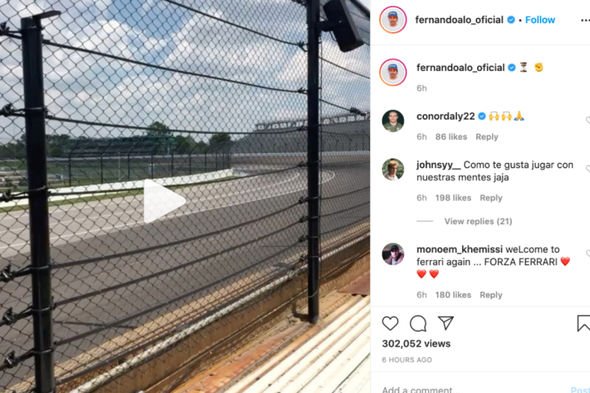 He also posted a video on Instagram of F1 cars racing around a circuit with the hourglass emoji and a respect emoji.

“This is a really strange time in that driver contracts are coming to their end, to fruition, and teams are having to make decisions based on the future, with no current season as an indicator,” Brundle told Sky Sports on Tuesday.

“So this plays into the hands of young but experienced young drivers.

“The new kids in town haven’t had a chance to prove themselves as a Leclerc or a [Max] Verstappen, for example.

“They’re working blind at the moment, but I see a scenario that is [Carlos] Sainz to Ferrari, Daniel Ricciardo to McLaren, and then that leaves a seat at Renault which probably would be Alonso.”