Fernando Alonso is the opponent Esteban Ocon has had the most fun pitting himself against in F1 and the Frenchman would love for him to make a comeback. Alonso walked away from the top level of motorsport in 2018 following a disappointing second stint at McLaren.

The two-time champion has since competed in other racing series and is aiming to become only the second man in history to secure the Triple Crown.

Alonso needs to add Indianapolis 500 victory to wins at the Monaco Grand Prix and 24 Hours of Le Mans to follow Graham Hill in completing the set.

Alonso has hinted, though, that he might one day make a return to F1, where he also drove for Minardi, Renault and Ferrari.

Ocon is eager to see the 38-year-old back on the grid and the former Racing Point ace has named him as the driver he had the most fun competing against in F1.

“I think it’s Fernando Alonso,” Ocon told French outlet Le Mag Sport Auto. “In 2017 we had a lot of battles together, he is an impressive driver in the overtaking movements, the decisions that have to be made at the moment.

“He’s really good at racing and fighting with him is always hard but fair play. It’s very nice to fight with him and it’s a shame he left.”

Ocon, who this year will make his own F1 comeback with Renault following a season of testing at Mercedes, can’t see any reason for Alonso not to return.

“It would be cool [for Alonso to return to F1], although I don’t know where he is in his career plan and what he wants to do but… why not?” said Ocon.

Fernando Alonso hailed as ‘one of the greatest’ 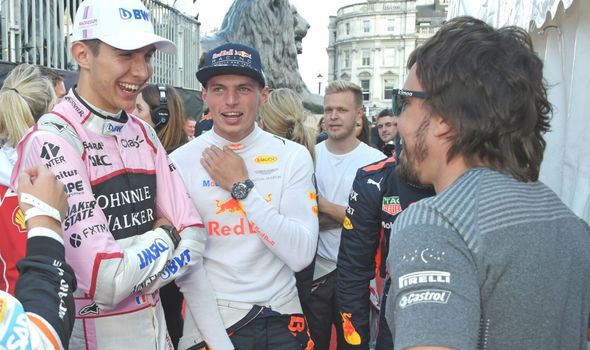 Ocon’s comments come in the wake of F1 managing director of motorsport Ross Brawn revealing he would be keen for Alonso to compete with the likes of Lewis Hamilton and Sebastian Vettel again.

“It’s a shame he’s not in the sport as he’s one of the greatest racing drivers there is,” Brawn said. “We would love him to be back in Formula 1 because he is such a tremendous racing driver.”

Ocon’s return to the F1 battle was due to take place last month at the Australian Grand Prix, but the Melbourne meet was cancelled due to the coronavirus pandemic.

Eight more Grands Prix have been called off, with the Frenchman’s home race at Circuit Paul Ricard currently scheduled to be the new starting point for the heavily disrupted 2020 campaign.