‘We are not a disaster like people say’: Carlos Sainz defends Ferrari strategy despite costly pit call at the French Grand Prix while he was fighting Sergio Perez for third place

Carlos Sainz believes criticism of Ferrari’s strategy is unfair despite what seemed another costly mistake at the French Grand Prix.

The Spaniard did well to move up the order having started at the back of the grid due to penalties for new engine parts.

However, he picked up a five-second time penalty after being given the green light to exit his pit box, almost crashing into Alexander Albon. And then, surprisingly, he was told to pit again while battling and overtaking Sergio Perez for third place, moving him into a podium spot. 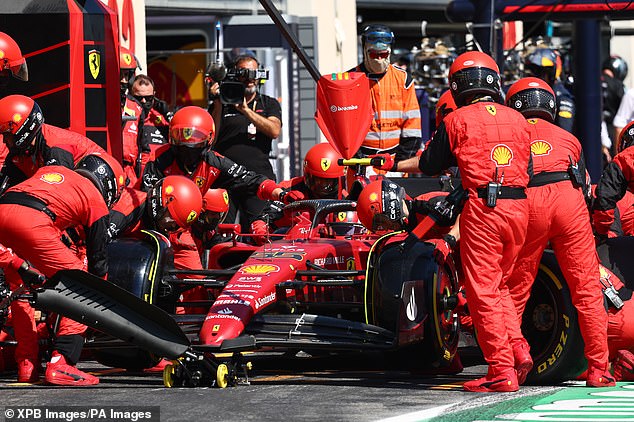 With just 10 laps to go, there was not enough time for him to make up those places again even with fresh tyres. He had to settle for fifth.

Asked by Sky about the strategy after the race, Sainz said: ‘I think the team has done a very good job on strategy this year. I still believe at Ferrari we get super-criticised for things that other teams might be going through also in their pitstop windows.’

‘Every time there’s a tricky moment on strategy we are discussing things, but we are not a disaster like people seem to say we are.

‘It’s just, we like to discuss things, we are open about them – yes, I was in the middle of an overtake but the team believed that was the right lap to stop and come back through the field. 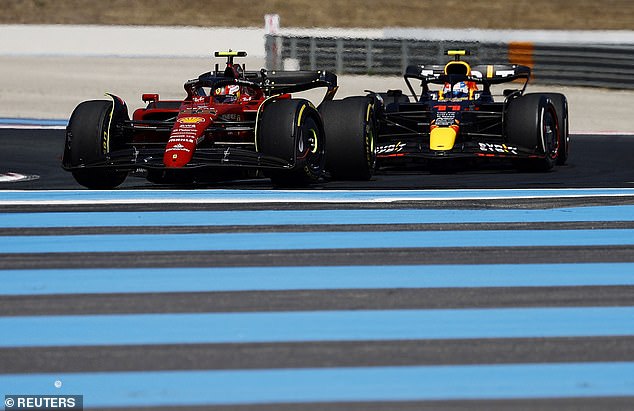 Sainz had overtaken Sergio Perez for third place, moving him into a podium spot

‘I believed that maybe at the time it was maybe better to risk it and stay out and see what happens with the tyres, even if it was a medium tyre on the limit of the life – but I had just made it to P3 and I saw a podium position, I thought if I make these tyres last maybe I can finish on the podium.

‘But we will never know. It was a feeling, the team has a lot more data on the computer, they have a lot more numbers to go through, and if they made that decision, I’m 100 per cent convinced they made it with the best of intentions and the best of spirits.’