Red Bull Holden Racing Team star Jamie Whincup won two of the three races at the Townsville street circuit in last weekend's round of the Supercars Championship. But he knows that if his mechanics and engineers have not improved his car in the intervening seven days he will have little chance of a repeat when the cars hit the track in Townsville once more this weekend.

Seven-time Supercars champion Whincup is certain that the pace of development, even in the short space of a week, means that he and his team will have to be sharper, smarter and faster than they were last weekend if they are to prevail again.

Jamie Whincup hopes to further improve his position in the championship this weekend. Credit:Edge Photographics

"We hit the sweet spot and got it right. What we had last weekend was very competitive so we won't venture too far away from it," he said.

"But we can't just rely on last week's settings and hope to win again. All the teams and engineers have had a week to work on their set-ups and fine tune how their cars worked last week. They have spent that time looking at the data and finding ways to optimise performance further, and I am expecting everyone to be going quicker.

"It's unbelievable how much the cars move on, so anyone who uses the same set-up as they had last week will just be gobbled up."

Whincup made inroads into current champion Scott McLaughlin's series lead last weekend but has to keep running at the front of the pack if he is to have any hope of running down the flying Kiwi by the end of the season , which now culminates in the biggest race of all, the Bathurst 1000, in mid-October. 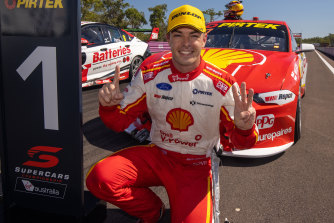 The Shell V-Power Ford driver has a 123 point lead over the veteran Whincup, with Chaz Mostert 261 points adrift of Whincup in third place.

Whincup, who is also a four-time Bathurst hero, said it is essential for the commercial health of the championship that McLaughlin is not allowed to race away into the distance while the others struggle to match his pace.

"We have just got to keep our head down. We feel like it's our responsibility, it's not anybody else's," he said.

"We want next door [McLaughlin] to be going flat out right to the end and we just want to take the challenge to them. May the best man and team win."