Miami Dolphins quarterback Ryan Fitzpatrick has welcomed the opportunity to help newly-drafted Tua Tagovailoa fulfil his potential in the NFL, but remains eager to continue his own on-field journey.

The Dolphins made Tagovailoa the No 5 overall pick in April’s NFL Draft as they sought their long-term face of the franchise having finished 5-11 and bottom of the AFC East in 2019.

Tagovailoa threw for 7,422 yards, 87 touchdowns and 11 interceptions in 32 career games at Alabama, finishing his college career with NCAA records in passing yards per attempt, passer rating and total yards per play.

“I’m his biggest cheerleader right now, but I also want to be out there playing,” Fitzpatrick said on ‘What’s Next with Eric Wood’, a podcast hosted by his former Buffalo Bills team-mate.

“I also want to be on the field. And that’s why I’m still doing it, because I still enjoy the game.

“Hopefully some of the lessons I’m able to teach him are from watching me. But if it’s the other way around, I’m going to do my best to help him succeed in the best way he can.” There is a strong chance Fitzpatrick retains his starting job under center at least for the start of the 2020 campaign as the Dolphins ease the Alabama star into the league following his recovery from hip surgery in November.

The 37-year-old edged out Josh Rosen in Miami last season, throwing for 3,529 yards, 20 touchdowns and 13 interceptions and going 5-8 as a starter in his 15 games. He is now heading into his 16th season in the NFL.

Regardless of who is on the field, Fitzpatrick is keen to assist his new team-mate in making the transition. 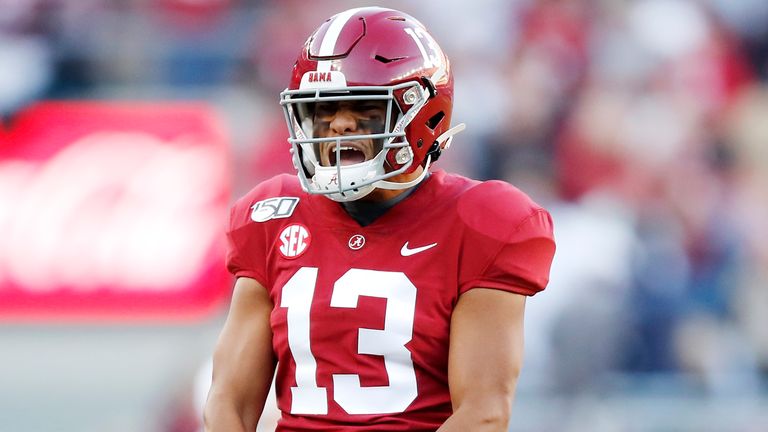 “The other thing in bringing a new guy in that I always try and impress right away on these guys is: I am here,” Fitzpatrick added.