Tiger Woods will not be at one of his favourite hunting grounds when the US Open returns to Torrey Pines this week. But given his association with the course, Woods will dominate the historical highlight reels during the coverage.

Picking the most memorable of Woods’ 15 major championship victories is no easy task. He has blitzed scoring records and world-class fields in a handful of those wins, he has found a way to get over the line when not at his best in others. And, of course, he defied the doubters when he landed No 15 – and his first in 11 years – at the Masters in 2019.

But it was No 14 that stood out for many reasons, chiefly that he played 91 holes practically on one good leg when the US Open was last played at Torrey Pines in 2008. After wincing his way around a punishing layout for four days, he made one of the best clutch putts of his career on the 72nd green to force an 18-hole playoff against unheralded veteran Rocco Mediate. 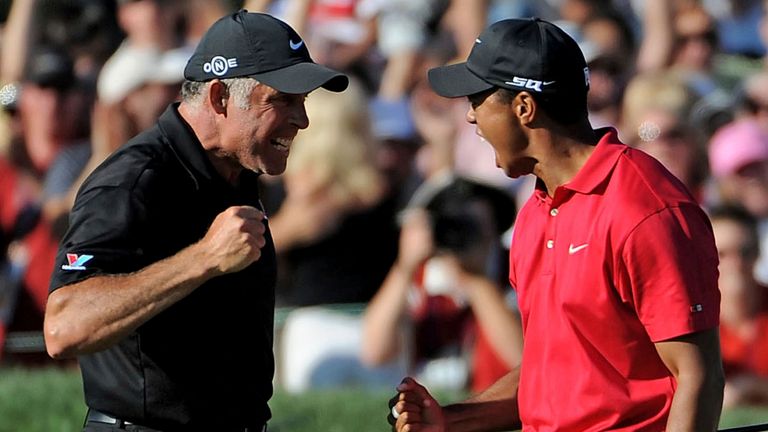 And those extra 18 holes were not enough to separate the pair, with Woods finally getting his hands on the trophy after one hole of sudden-death action. A day later, the champion revealed he had been playing with a double stress fracture in his lower left leg as well as a dodgy ACL in his knee, injuries which required immediate surgery and kept Woods on the sidelines for the remainder of the year.

The warning signs were waved long before the build-up began for the second major of what was promising to be another golden year for golf’s standout star. Woods began 2008 with four victories in four starts, making it eight wins in nine events stretching back to the previous year’s WGC-Bridgestone Invitational – a run punctured only by a “disappointing” tie for second at the Deutsche Bank Championship, won by arch-rival Phil Mickelson.

Woods was also runner-up behind Trevor Immelman at the 2008 Masters, albeit a distant three strokes behind the South African after a final round devoid of much competitive drama at Augusta National. And in the three months in between the Masters and US Open, Woods did not play at all after undergoing surgery on his left knee shortly after leaving Augusta.

There were rumours of a setback in his rehabilitation, and doubts over his participation at the US Open remained up until he pitched up in San Diego, where he had won for the sixth time at the Buick Invitational earlier in the year. He practised sparingly, and took his place on the first tee on Thursday with doubts lingering over his physical ability to get through the tournament. 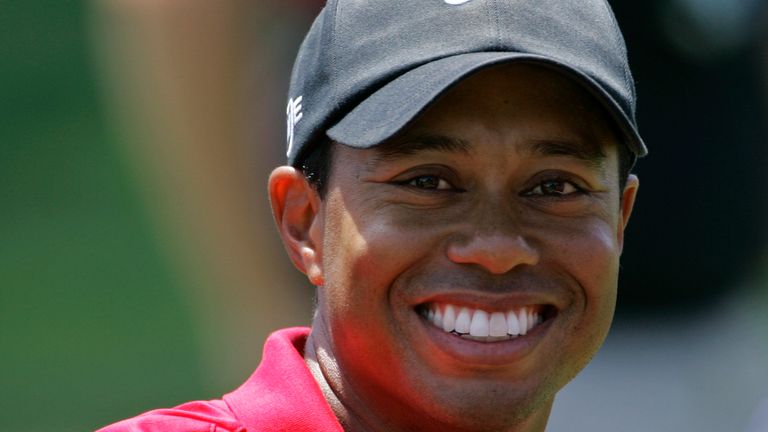 And those doubts were enhanced after just a few holes, when he recoiled in pain after hitting a drive, clutching at his suspect left knee. It was not an isolated incident, but he managed to get round in 72 – two over par and just five shots off the lead with the South Course yielding only 11 rounds under par, with a scoring average the wrong side of 75 and a half.

The next three days followed a similar pattern, although the numerous sightings of Woods doubled over were interspersed by several moments of sheer brilliance. The huge eagle putt, the chip-in for birdie from a dastardly stance which required the help of caddie Steve Williams to pull the stricken star onto a flat lie.

Rounds of 68 and 70 had given Woods a one-shot lead over perennial major nearly-man Lee Westwood after 54 holes, with Mediate the only other player under the card heading into the final round. After two holes on Sunday, Mediate had a two-shot lead when Woods double-bogeyed the first and dropped another shot at the second.

Woods’ proud record of converting 13 third-round leads into major victories looked under serious threat. But, not for the first time, he dug in and defied the pain to grind out par after par, reclaiming the outright lead with birdies at nine and 11 only to give both shots back at 13 and 15. And when Mediate nailed a slippery putt for par at the last, Woods and Westwood both needed to birdie the par-five 18th to extend the US Open into a fifth day. 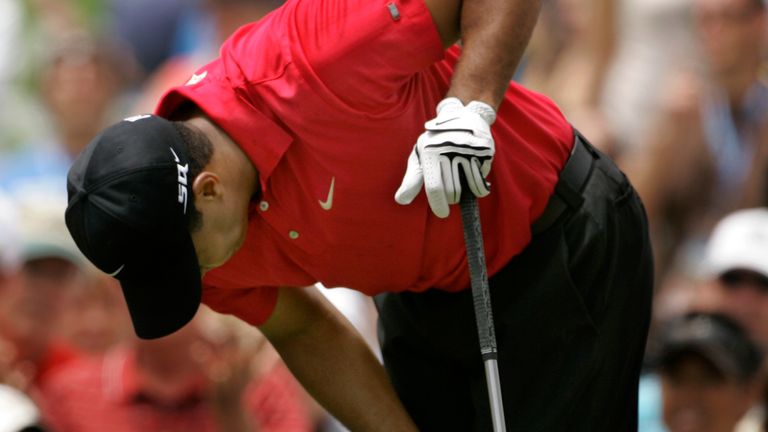 Both were unable to go for the green in two after failing to find the short grass from the tee, but both gave themselves a chance to deny Mediate after clipping their third shots to “makeable” range – Westwood 15 feet away and Woods a couple of feet closer but, crucially, on the better side of the hole.

Westwood’s slippery left-to-right putt missed the target and his major hopes were put on hold once again, leaving centre stage to the red-shirted Woods. Although his putt had much less break, the green between his ball and the hole was littered with pitch marks and spike marks which may have dominated his vision when he crouched gingerly towards the turf to read the line.

He rose slowly, stood over the putt, and his ball seemed to spend as much time in the air as it did rolling on the grass before catching just enough of the cup to head south. The celebrations that followed were legendary, and the perfect antidote to the pain he had been dealing with for four arduous days.

“I knew he’d make it,” said Mediate with the world’s cameras trained on him as he awaited the outcome of the Woods birdie putt. And his sporting words contained little disappointment as he quickly got to grips with the prospect of spending 18 holes in golfing combat with an ailing Woods the following day. 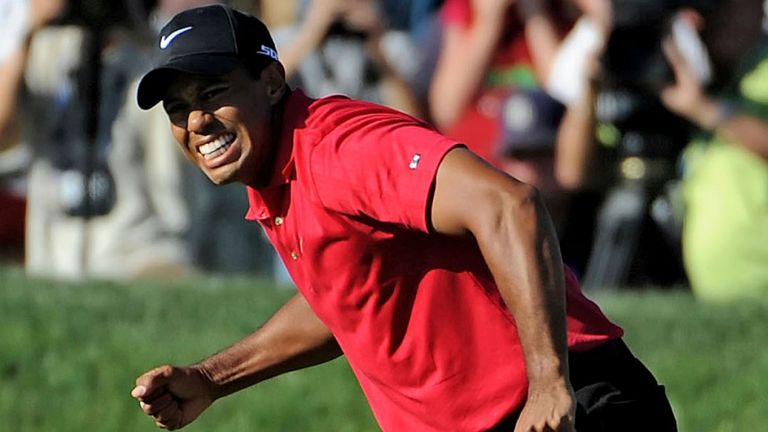 The pair were all smiles on the first tee, but the Woods expression was swiftly replaced by another grimace as he launched his opening drive and hobbled towards the fairway. But, again, his steely resolve and determination continued to confound logic, and he found himself three clear of the veteran after 10 holes before he bogeyed the next two to let Mediate back in the game.

They traded birdies at the 13th, and Mediate then birdied 14 and 15 to go from three down to one ahead in the space of five pulsating holes. The veteran preserved his lead and took the ultra-conservative route to a par-five at the 18th, again forcing Woods to make birdie to stay in the hunt. Almost inevitably, Woods again called on all his competitive reserves to make his four and take them back to the seventh hole for sudden-death.

It was all over minutes later, when Mediate found sand off the tee and had spectators scurrying for cover when he pulled his second towards the stands on the left. He could not save par this time, and a cast-iron four from Woods was enough to end the battle.

“I’m done,” said a relieved Woods afterwards, clutching the trophy in one arm and a Tiger cub in the other. “This was my greatest ever championship and the best of the 14 because of everything that has gone on over the past week.”

Two days later, Woods revealed the full extend of what he had to deal with, and we would not see him in action again until March the following year.

The magnitude of his achievement in those circumstances is incredibly tough to fathom. But it’s reasonably safe to predict that the 121st playing of the US Open at Torrey Pines this week will not come close to matching the drama of 13 years ago.

If Woods himself said it was the greatest major win of his career, who are we to argue?

Related posts:
Previous Post: Improbably, the Hawks are two games away from the East finals
Next Post: Luis Enrique defends Alvaro Morata after missing chances as Spain held by Sweden