Lee Elder was awarded a rapturous welcome as he enjoyed another moment of Masters history shortly before the 85th edition of the tournament got under way.

Elder made a ground-breaking appearance as a player in 1975 when he became the first Black man to compete at Augusta National, the first of his six starts in the Masters.

His impact on the wider golfing community was recognised with an invite to join Jack Nicklaus and Gary Player as honorary starters ahead of the first round on a beautiful Thursday morning, a moment Elder described as “something I will cherish for the rest of my life”. 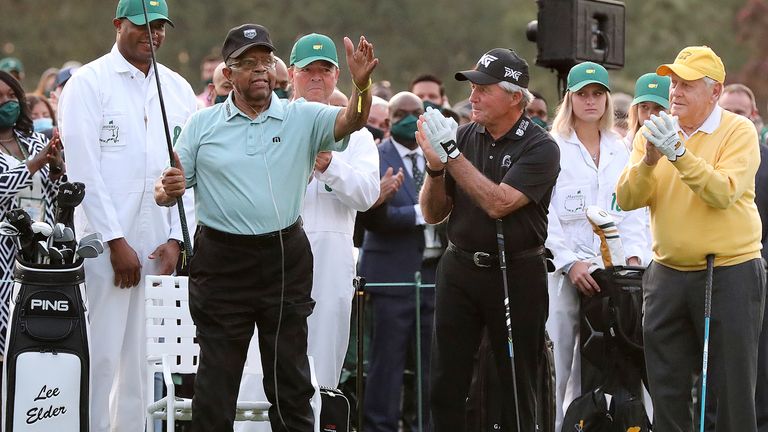 The 86-year-old was, unfortunately, not able to hit a ceremonial opening drive, although he summoned the strength to arise from his wheelchair to acknowledge the standing ovation following his glowing introduction from Augusta chairman Fred Ridley.

Elder was in excellent spirits as he watched Player and Nicklaus launch their drives down the centre of the fairway, with Player even managing a trademark high leg-kick in celebration of a swing that was hugely impressive and supple for an 85-year-old.

“I certainly want to say thank you so very much for this great opportunity,” Elder said afterwards. “For me and my family, I think it was one of the most emotional experiences that I have ever witnessed or been involved in.

“It is certainly something that I will cherish for the rest of my life. My heart is very soft this morning, soft because of the wonderful things that I have encountered since arriving here on Monday and being able to see some of the great friends that I have made over the past years, especially like these two gentlemen (Nicklaus and Player) here.

“We have competed against each other, and we have certainly enjoyed a lot of pleasant moments. I just want to say thank you so very much to have me here. It’s a great honour, and I cherish it very much, and I will always cherish it, and I want to thank the chairman for extending me this great privilege.”

Six-time Masters champion Nicklaus added: “I think that having Lee there was the right thing to do, a nice thing to do. I told Lee, if he could hit it, hit the tee, there’s no way in the world he wouldn’t outdrive me!

“It’s always a nice experience to open up the Masters, and Gary and I have had the privilege of doing that for a few years, and it was great to share that first tee with Lee and Gary.”

Player, a three-time winner at Augusta and the first international Masters champion, recalled the difficulties faced by Elder when he invited him to South Africa for their national PGA Championship during the apartheid era towards the end of the 1960s.

“This was a very historic moment for me,” he said. “I’ve had the privilege of having a great friend and a man that I admire so much in Jack Nicklaus, the greatest gentleman that ever played golf, without a question.

“In 1969, I think it was, I invited Lee Elder to come to South Africa, and it’s quite sad to think that in those days, with the segregation policy that South Africa had, that I had to go to my President and get permission for Lee Elder to come and play in our PGA. It’s quite sad, but things have progressed since we had that wonderful man, Nelson Mandela, one of the greatest leaders the world has ever had.

“Lee Elder came down, and he was put under an enormous amount of pressure by people in this country, mainly Black people, understandably, and I was called a traitor. Lee Elder on his way to South Africa won the Nigerian Open, came to South Africa, played in our PGA, and got standing ovations. 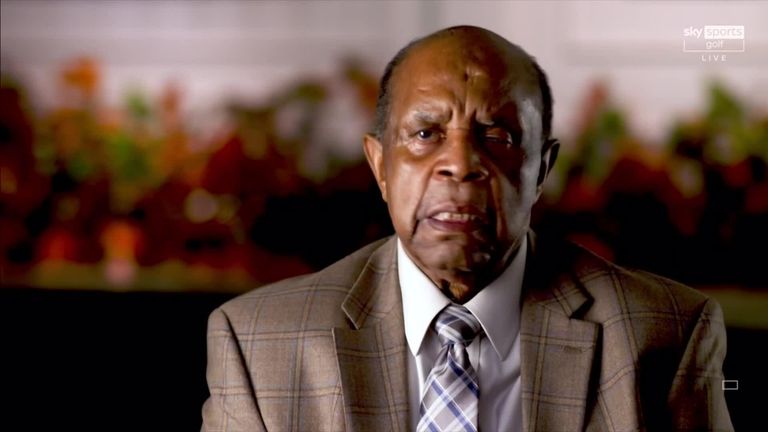 “It always amazed me that presidents of the United States would be giving these different awards to athletes for their athletic prowess, and here was a man that changed the lives and changed and put a spoke in the wheel of segregation in South Africa and was never given the awards that he actually duly deserved.

“He got the Bobby Jones Award, which Jack and I were there, and to be bestowed upon and be given this award here today, which he deserves so richly. But when you do something for the human being and for freedom, which unfortunately is dying in the world at a rapid pace right now, it is a very historic moment for me.

“And also to see Phil Mickelson and Bubba Watson on that tee brought back memories because I used to go and watch Jock Hutchison tee off before I played. That just goes and endorses the fact that they have such respect for this game that has unified people around the world to such an extent, it’s quite unbelievable.”

Watch the video above to see Lee Elder making more Masters history ahead of the 85th Masters. Watch extensive live coverage from Augusta National on our dedicated channel – Sky Sports The Masters.