Some sponsors associated with golfers involved in the Saudi-funded LIV Golf events are monitoring the fallout from the controversial series to assess whether they might cut ties with some players.

MBS has been implicated by intelligence agencies in the 2018 murder and dismemberment of Jamal Khashoggi, and Saudi Arabia has been widely criticised by human rights groups for their lack of democracy, use of the death penalty, and treatment of women and the LGBT community.

Many of the players at this week’s LIV event have been derided for, in effect, becoming poster boys for Saudi Arabia, having pocketed massive sums to play and publicise LIV.

Mickelson has been paid $200m to sign up, and Johnson $150m, while others have been guaranteed tens of millions, before any prize money.

When McDowell tweeted that he was ‘excited to be participating’ in the inaugural LIV event, his replies were deluged with GIFs of bloody swords and references to human rights abuses.

‘What’s the trophy for the winner? A solid silver bone saw?’ asked one respondent.

‘Sad. Just sad and disappointing that it’s all just become about the money,’ said another.

‘Good luck with your decision and bye. Won’t be watching you play,’ said a third.

Sportsmail contacted a range of sponsors with personal tie-ups to to golfers in the inaugural 48-man field, from Adidas and Hublot to Ping, Titleist, NetJets, Callaway, Lacoste and Srixon among others.

Some indicated they were keeping the situation under review. Most did not reply.

BMW said: ‘Peaceful competition and events which cross international boundaries promote fairness and respect. These values, conveyed through sport, are also important to the BMW Group.

‘Through BMW brand partnerships, the BMW Group is involved in various golf sponsorship commitments, including the DP World Tour, the PGA Tour and the LPGA Tour.

‘BMW is closely monitoring the current situation and we are in ongoing dialogue with our golf partners.’ 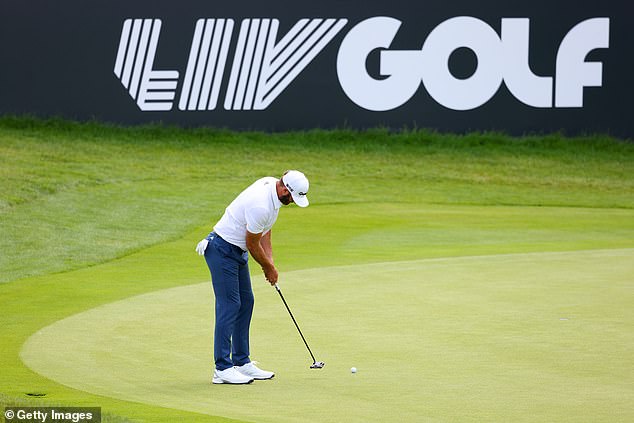