The loudest cheer all week erupted at the 18th green at Carnoustie on Saturday when Scottish amateur Louise Duncan rolled in a 12ft birdie putt to leave the locals dreaming of partying like it’s 1999.

‘Go out and win it tomorrow, Louise,’ screamed one spectator, as the 21-year-old from West Kilbride completed a wonderful third-round 68 at the AIG Women’s Open that has given her a chance of creating history in becoming the first amateur to win this coveted major.

What a refreshing delight as the Stirling University student tamed the fearsome links to lie tied fourth and within two shots of the lead held by Anna Nordqvist from Sweden and Nanna Madsen of Denmark.

While every other player was dressed in waterproofs and many resorted to hand warmers between shots on a soggy Saturday in Angus, the slender Duncan played all 18 holes in shorts. ‘I’m a true Scot!’ she laughed. ‘I was actually going to take my jumper off at one point. My skin is waterproof.’

The locals will be hoping she is bulletproof on Sunday as she looks to follow in the footsteps of her fellow Scot Paul Lawrie, who won an unforgettable edition of the Open on this links in 1999.

Duncan, of course, wasn’t even born when Lawrie took advantage of the French follies of Jean van de Velde, playing the shot of his life to set up a clinching birdie to win the play-off at the 18th. Duncan almost came up with a carbon copy — a perfectly-struck six iron — and there were plenty of fist pumps as the putt dropped and appreciative hand claps for a devoted audience.

‘I came here just hoping to make the weekend and enjoy myself and I couldn’t have asked for anything more today,’ said Duncan, who earned her spot in this event as the British women’s amateur champion. 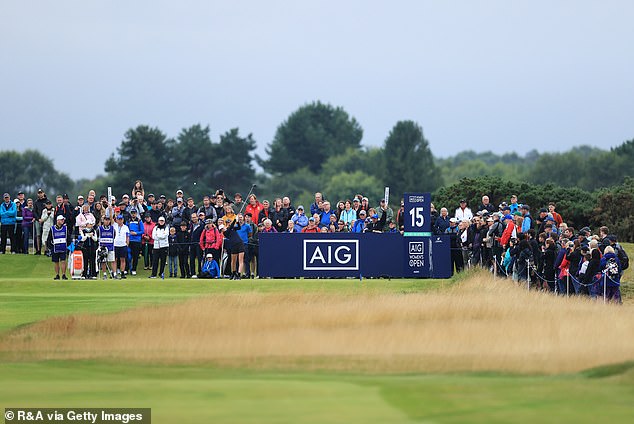 ‘The crowd were fantastic, I never expected that many to watch, especially in the rain. I struggled to get my tee in the ground on Thursday, I was so nervous, and I’m still shaking but it’s getting easy in some way.’ She is well ahead in the race to finish lowest amateur, so is all but assured of at least one prize today.

She said: ‘I obviously don’t know what’s going to happen but I do know that Carnoustie has a record for disasters, so it’s important to just go out with the same attitude and see where it leaves me at the end of the day.’

If Duncan did win, she would have to forego the £640,000 first prize, as an amateur. The last amateur to win a major was Catherine Lacoste of France, who won the US Women’s Open back in 1967. Duncan finished the third round as leading British player, after Georgia Hall, joint leader at halfway, had one of those days when putts shaved the hole rather than falling in, and the two loose iron shots she hit all day cost her strokes. The 2018 champion finished with a 73 but is still only three shots off the pace.

Two-time major winner Nordqvist came up with the round of the week as she needed just 65 strokes to move up no fewer than 22 places. World No 1 Nelly Korda is lurking dangerously just three shots behind, with another big hitting American, Lexi Thompson, only two adrift.