RYDER CUP LIVE: Team Europe bid to make comeback from disastrous start against Team USA on day two at Whistling Straits as out-of-sorts Rory McIlroy is dropped for the foursomes

Team Europe has won eight of the last 10 Ryder Cups but its hopes of retaining the prestigious trophy hang by a thread after Team USA opened up a four-point gap on Day One at Whistling Straits in Wisconsin.

The Americans won both sessions 3-1 to take a 6-2 lead on Friday, their biggest ever lead after the first day of the Ryder Cup and require just 8.5 points to win back the trophy for the first time since they triumphed at Hazeltine five years ago.

The Europeans, meanwhile, face an uphill battle to reach the 14 points they need to retain the Ryder Cup and may have to produce another stunning comeback like the one they pulled at Medinah in 2012.

Captain Padraig Harrington has reshuffled his pack, dropping Rory McIlroy for Saturday’s foursomes after the Northern Irishman lost both of his matches on Friday.

The four-time major winner will sit out for the first time in his Ryder Cup career, after playing 26 straight matches since making his debut in 2010.

Two-time major winner Collin Morikawa tees off for Team USA in the second match. As was the case on Friday, Morikawa will again play alongside world No 2 Dustin Johnson after the pair finished 5 under on Day One.

Paul Casey and Tyrrell Hatton, meanwhile, are flying the flag for Europe.

Team USA are carrying on where they left off yesterday, as Koepka and Berger win the first hole with ease.

Koepka hits his wedge shot to within six feet of the cup, before Berger makes no mistakes with a lovely right-to-left putt for Team USA’s first birdie of the day as the hosts take the lead in the first match.

The USA were 17 under par as a team in the foursomes yesterday and look in the mood to keep their foot firmly on the gas pedal.

That’s not exactly the start Team Europe would’ve wanted. Garcia yanks his tee shot into one of the bunkers on the left on the par 4 first hole.

Berger, meanwhile, hits a lovely booming tee shot straight down the middle much to the delight of the home crowd.

Day Two of the Ryder Cup is officially underway and, if possible, the American crowd seems to be even more boisterous than yesterday.

The Americans have their tails up and the backing of a partisan crowd, hardly ideal conditions for the Europeans.

Friday was a day to forget for Team Europe as they lost both sessions 3-1 and now find themselves with their back firmly against the wall going into Day Two.

Friday was only the second time in the last 40 years – the other was 2008 – that America has won both sessions on day one.

As was the case yesterday, the foursomes follow the alternate shot play format, where players compete alongside each other playing one ball in alternating order on each hole. The fewest shots will win the hole.

The Spanish pair of Jon Rahm and Sergio Garcia are reunited after winning Europe’s first point yesterday as are Lee Westwood and Matthew Fitzpatrick. USA’s captain Steve Stricker has confirmed his four pairs from Day One, albeit in slightly different order.

The morning foursomes are as follows:

Sergio Garcia and Jon Rahm vs Brooks Koepka and Daniel Berger – 13:05pm (7:05am)
Paul Casey and Tyrrell Hatton vs Dustin Johnson and Collin Morikawa – 13:21pm (7:21am)
Bernd Wiesberger and Viktor Hovland vs Jordan Spieth and Justin Thomas – 13:37pm (7:37am)
Lee Westwood and Matthew Fitzpatrick vs Patrick Cantlay and Xander Schauffele – 13:53pm (7:53am)

All tee times in BST (CST).

Good afternoon and welcome back to Whistling Straits in Wisconsin for Day Two of the 2020 Ryder Cup.

Nine years on from the Miracle of Medinah, Team Europe may need some divine intervention again if they are to retain one of golf’s most prestigious trophy after a dismal opening day.

The Europeans lost both sessions 3-1, allowing Team USA to build a 6-2 lead, the Americans’ largest ever buffer after the first day of a Ryder Cup.

Team Europe’s captain Padraig Harrington has rolled the dice ahead of Day Two, dropping Rory McIlroy for Saturday’s foursomes after the four-time major winner lost both of his matches on Friday.

It’s the first time the Northern Irishman will sit a Ryder Cup session after playing 26 consecutive matches since making his debut in 2010. 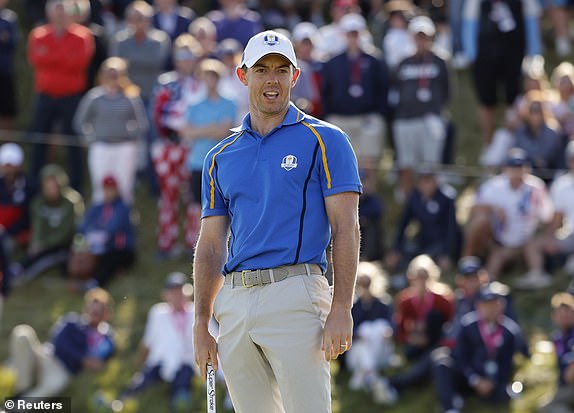