Sure, the news from Tiger Woods this week – that he pretty much accepts that after his crippling injuries of last year his best hope is the occasional minor, as the majors will be beyond him – was pretty big and appropriately covered.

The pity of it was that this news so swamped the golf headlines that it squeezed out much of the coverage that would have been accorded to note the death of the very bloke who – as Woods himself acknowledges – was the sine qua non of all successful black American golfers of the modern age.

Lee Elder, who died on Sunday aged 87, was the man who first forged the black path down the first fairway of the exclusive clubs and elite tournaments against heavy white resistance, and it was his courage and resilience that made it easier for all who followed him.

And it is quite a story!

Born in America’s deep south in 1934, at a time when the Ku Klux Klan had just passed its peak, Robert Lee Elder was one of 10 children, and an orphan by the time he was nine. To help pay the grocery bills for his siblings he took a job caddying at an all-white club in the Dallas area, getting the odd tip. And, no, of course the idea of playing himself never occurred to him in the early years. It was not his place; not what black people did. But then, bit by bit, observing the way the rich Texas men did it, in his downtime he started having a go in spots where no one could see him to shout at him, and realised he was actually pretty good at it!

By the time he moved to LA in his mid-teens to live with an aunt, he was actually very good and started doing a little hustling – betting white boys that he could beat them at golf, usually over nine holes.

You? A black? Their racism, their refusal to believe that a black man could beat them at what they saw as a white-man’s game, saw him clean up.

Lee Elder waves to fans at the Masters at Augusta this year.Credit:Getty

“I once shot 38 playing on one leg,” he told The New York Times recently. “Another time I shot 41 playing on my knees.”

When he was 18, he played golf against the great black heavyweight boxing champion Joe Louis, who loved his golf, and he met the man who had taught Louis how to play, Ted Rhodes, himself a great black golfer, who encouraged him to pursue the game, and taught him a few more tricks of the trade.

But take his skills higher, to compete in the big tournaments?

Out of the question at the time. And, if you can believe it, it was specifically written in the PGA constitution that it was only “members of the Caucasian race,” who could play professional golf. As to the Masters at Augusta, that might as well have been on another planet, for all the chance he had to play in that.

After all, as reported by CNN, the founding president of the Augusta National Golf Club was on record as saying: “As long as I am president, all the golfers will be white people, and all the caddies will be black.”

But slowly things began to change, at first only nominally.

In 1961, the PGA deleted the clause saying it was only for white people.

It was around that time that Elder started playing golf on the black circuit, called the United Golfers Association, where, as The New York Times reports, “In one stretch of 22 consecutive tournaments, he won 18.” 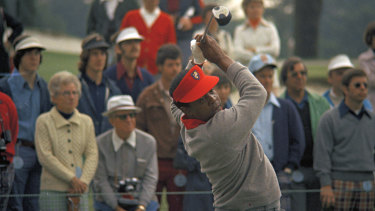 Lee Elder hits a drive during the practice round at the Masters in 1975.Credit:Getty

By 1968 Elder made his way onto the PGA Tour where bitter racism was a part of his daily life, as with other black golfers. When playing at Pensacola Country Club in Florida that year he had to get changed in the car park because they wouldn’t allow anyone with his skin in the clubhouse. Still, he persisted and that very year went toe to toe, blow for blow with Jack Nicklaus himself at the American Golf Classic in Akron, Ohio, finally losing in sudden death.

The real breakthrough, however, came when, after winning the 1974 Monsanto Open at … Pensacola Country Club in Florida – take that, you racist bastards! – Augusta officials had no choice but to very reluctantly invite him to the 1975 Masters, as the winner of a PGA tournament.

The reaction to his invitation was severe and he took the death threats he received so seriously that, come the tournament itself, he rented two houses near Augusta so that, if an attack did come he was a 50 per cent chance of surviving. Under the circumstances it is not surprising he did not play his best golf and approaching the 18th fairway on the second day knew he wouldn’t make the cut.

But look now. For here they come, lining his walk up that fairway to the 18th green, and now all around it. It is the black staff of Augusta come out to applaud him. They ignore the white stares and glares and clap one of their own who has come this far.

“As I walked toward the green,” Lee told Golf Digest two years ago, “I couldn’t hold back the tears. Of all the acknowledgments of what I had accomplished by getting there, this one meant the most.”

He played the Masters six more times, with mixed success, before retiring, but the path he forged was starting to fill. And in 1997, when a young black man by the name of Tiger Woods tore the course up to win by 12 strokes, Lee was there.

For all that, it was not until this year, after all the Black Lives Matter protests raised awareness of just how appalling racism in America still is, that Augusta invited Lee back to have the honour of being one of the ceremonial starters for the Masters, with Jack Nicklaus and Gary Player, hitting the ceremonial first shots before the start of the actual tournament. No matter that by that time, 87 years old, Lee was too old and ill to do anything other than wave an arm.

The mob gave him a standing ovation, at last recognising his legacy was greater than any mere Masters victory.

It was, he said, “one of the most emotional experiences I have ever been involved in” and “something I will cherish for the rest of my life.”

As it happened, he only had a little over six months of that life left to live. But good on you, Lee Elder. You were emblematic of sport’s fabulous ability to help achieve change.

Related posts:
Previous Post: Football hardman Thomas Gravesen once lost his mind and swung at Robinho
Next Post: Lamar on 4-INT game: I looked like a rookie