What a contrast Miguel Angel Jimenez and Thorbjorn Olesen make at the Hero Open at the Forest of Arden on Thursday.

On the one hand, the Spaniard who will break Sam Torrance’s long-standing record for most appearances on the European Tour. On the other, the Dane who must have feared he would never play on the circuit again.

Olesen is making his first appearance in exactly a year. It’s a chilling coincidence that in America, the WGC-Fed Ex International is taking place in Memphis.

It was following a flight home to London from that event 12 months ago that Olesen ended up being arrested and charged with sexual assault, assault by beating and being drunk on an aircraft. The 30 year old was immediately suspended by the tour, pending the trial. He has pleaded not guilty to all three offences.

The 2018 Ryder Cup star was due in court in May but that has now been delayed until December next year at the earliest, owing to the pandemic. Accordingly, the tour have lifted the suspension, and he will play his first round on Thursday morning alongside former Ryder Cupper Oli Wilson from England and gifted Belgian Thomas Detry.

Jimenez was once named the game’s ‘most interesting man’ by Golf Digest. He’s certainly the marathon man. Now 56, he made his tour debut way back in 1983 and now he’s playing, would you believe, his 707th event. He is not just making up the numbers, either. 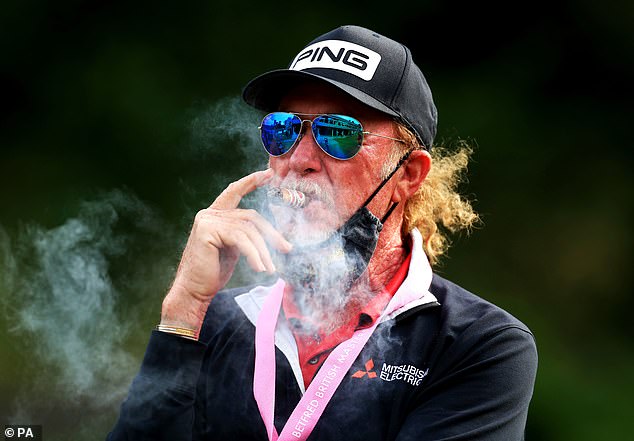 At a co-sanctioned tournament in Austria a fortnight ago, Jimenez was the halfway leader. At last week’s British Masters, he faded with a final round 74, but still finished tied 38th. The Malaga marvel was one of those players at the back of the 18th green, cheering wildly as Italian Renato Paratore holed his winning putt.

Yes, it’s fair to say that no-one has enjoyed tour life more than Jimenez, who became the oldest winner in 2014 at the age of 50, when he won the last of his 21 tour titles at the Spanish Open. On Thursday afternoon, he will play in the first round alongside Paratore who, at 23, just happens to be couple of years younger than his eldest son.

Meanwhile, in Memphis, 44 of the world’s top 50 have gathered, where Rory McIlroy will have an early opportunity to regain the number one spot off Spaniard Jon Rahm.