For most sports, the heady days of 2019 feel like a world away. For Australian golf, it may as well exist in another universe given the challenges and upheaval COVID-19 has thrust upon the domestic game.

It was a perfect storm of publicity before an unwanted calm. Since then, a pair of Australian Opens and an Australian PGA Championship have been cancelled, while the familiar flow of returning homegrown stars from the US and European tours has come to a standstill.

“It’s been bloody difficult. Professional golf is hard enough as it is without all of the extra hurdles being put in your way,” says former pro Kim Felton, who is now a tour development manager with the PGA of Australia.

“Having been there and done that, it’s brutal. Professional golf is brutal. So for some of those opportunities to have been taken away, the players were devastated.”

Golf has long been part of the familiar rhythm of the Australian sporting summer, which is why its mainstream absence has been such a strain on the sport and its administrators, who only now are starting to see a light at the end of the tunnel as restrictions begin to ease and borders start to open.

Tiger Woods led America to victory in the Presidents Cup at Royal Melbourne in 2019.Credit:Getty

Tennis and cricket, its two summer bedfellows, found a way to continue amid at the elite level during the pandemic but neither are a worthy comparison, says Nick Dastey, the PGA’s tournament director, who says tennis, especially, is in another financial bracket altogether compared to the prizemoney on offer at the Australian golf majors.

“The only way tennis found a way was with all the players doing two weeks of hard quarantine. They were able to play a series of events with a total prizemoney that was something like $70m. We are talking totally different ballgames. The players are prepared to come down for that sort of reward, we just don’t have that at our disposal,” Dastey said.

“Our biggest events have relied on our superstar players coming back and they just weren’t going to come back and quarantine for two weeks to play one or two events. Even in the US and Europe, the fields look different every week.

“We found a way to get some domestic events away. But bubbling and quarantine just weren’t an option for our sport.”

Not everyone in Australian golf was entirely understanding of last month’s decision to cancel the Open and women’s Open, the second of which had been scheduled for February.

The Oceania Golf Players Association, a relatively new player advocacy body, felt there wasn’t enough consultation from Golf Australia before the decision to pull the pin was made.

“The OGPA are extremely disappointed in the cancellation of both the 2022 Women’s Australian Open and the 2021 Men’s Australian Open,” it said in a statement. “We believe it is fundamentally wrong that the players were not involved in the decision-making or problem-solving process with respect to getting a 2022 Australian Open up and running in some form.”

But the wheels are beginning to turn once more, while Felton and Dastey say the immense work being put in on the domestic front will reap significant benefits for Australian golf when the machine surges back to life.

The Open will be played in Melbourne at the Victoria Golf Club in a November-December timeslot later in 2022, before moving back to Sydney the following year, while the PGA will be held again at its new home in Brisbane in December.

Those two tournaments generate their own momentum yet it’s what has been happening beneath the hood of Australian golf during the hiatus that has those trying to nurture the next Green or Cameron Smith excited. The seeds sown now, Dastey insists, will shoot in coming years.

A bolstered domestic tour will include 14 events running from December to May, with hopes for that to be increased to 25 by the middle of the decade. More tournament play equals more experience for the generation next players, who can be starved of competition if they aren’t in possession of a Tour card in Europe or America.

“If you have watched golf in our country over the past 15-20 years, when our major events are on, the Open and the PGA, we have young, homegrown players that are up the pointy end of the leaderboard on Thursday,” Dastey said. 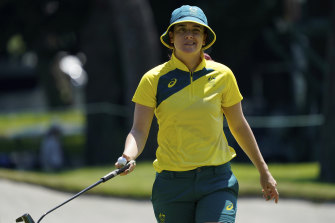 Hannah Green in action at the Tokyo Olympics this year.Credit:AP

“On Friday, a couple drop away. On Saturday there might be one or two left but by Sunday, the top 10 are usually players on international tours who play week-in, week-out.

“It’s not because our younger players aren’t good enough. But they aren’t tour-hardened and having that ability and resilience over four days is a massive part of the sport. They are all capable of shooting a 64 on any given day. But scoring low every week, over four rounds, across a demanding tour, is what makes you a great player.

“Our players are all aspirational. They want to play against the best in those massive events and for massive prizemoney. If they want to make a living out of playing the game, we need a strong tour at home. That’s what the whole vision is all about.”

Felton knows the importance of a rock solid Australian swing external to the headline tournaments. He never held a PGA or European card, he said, and wants rising players to be able to bridge that gap with more ease.

“There used to be golf on every week in summer and that’s what we are trying to get back again. We always want the top players here but we want our players to have a consistent schedule so they have something to fall back on,” Felton said.

“They should be able to hone their game here and be ready to fire when the opportunity comes.”