DEREK LAWRENSON: Rory McIlroy showed maturity and craftsmanship as he passed his first test at The Open in search of the Holy Grail… he is exuding confidence after moving two strokes behind pacemaker Cameron Young

There was nothing about the test on the Old Course that appeared to suit the natural game of Rory McIlroy.

On the first day of the 150th Open, a man who likes to play fast and to fixed targets was asked to play crushingly slowly and manufacture shots in the breeze.

‘Fiddly golf is not usually my forte,’ he conceded afterwards. No wonder, therefore, there was a bounce in his stride and a hopeful tone to his voice after completing an uplifting score of 66 to be just two strokes off the lead held by American Cameron Young.

The first task in the quest for the Holy Grail was passed with considerable rigour.

‘Now I have to back it up in the second round and hopefully make fiddly golf my forte for at least one week,’ he added.

McIlroy’s maturity and craftsmanship stood out on a first day that was fascinating without scaling any heights. It’s hard to do that when rounds are taking a mind-numbing six hours.

We know it always takes longer at the Old Course because of the number of drivable par fours and crossing fairways, but this was crazy. Some players would no doubt point to certain flag positions as a cause, and there were admittedly one or two that tested the bounds of fairness.

A quality leaderboard filled with different types of golfers was testament enough perhaps, that they stayed on the right side of the line. Their number included world No 1 Scottie Scheffler, who shot 68 in the harder afternoon conditions. 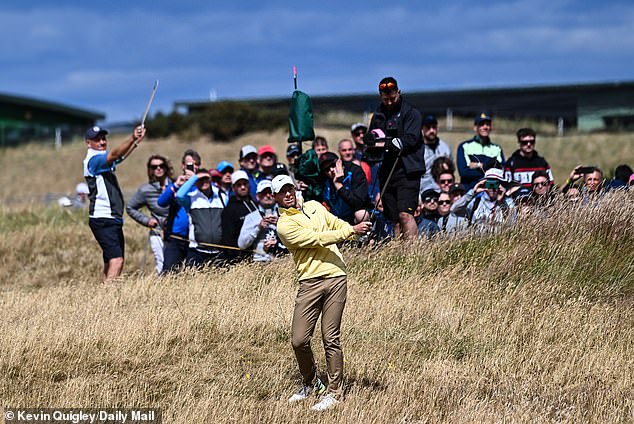 Two Englishmen to finish on the same mark were 49-year-old Lee Westwood and 21-year-old amateur Barclay Brown, who hails from Sheffield, the home city of Britain’s last two major winners, Danny Willett and US Open champion Matt Fitzpatrick. On 69 there’s the bomber Bryson DeChambeau and Ian Poulter, who isn’t.

As for the pacemaker, he’s not one of those one-round wonders who often lead following the opening skirmishes. Like defending champion Collin Morikawa, Sam Burns and his buddy Will Zalatoris, Young is just 25 and the latest off this amazing American assembly line.

In his rookie season, Young came close to winning the US PGA Championship in May, eventually finishing tied third, and was thrilled to mark his first round at the Open with such a score.

Young told a story afterwards of coming here as a 13-year-old, and his dad asking permission to play off the medal tees. Now the tees beyond those were no problem as he put together a notable bogey-free round.

Back in the day, a few R&A members came out to watch the seemingly presumptuous American teenager drive off the first tee. Carry on like this, and there will be a few more members watching him on the 18th green on Sunday.

Dressed in a bright yellow sweater, McIlroy certainly invited some ribaldry. ‘No banana skins today please Rory,’ one fan shouted in his direction as he made his way down the second hole.

The Northern Irishman obliged, with just the one minor slip in his terrific six-under-par round. He was roared on lustily by many in the 50,000 sell-out crowd who made it plain who they are hoping will become the Champion Golfer.

It was at St Andrews seven years ago where fate took an unkindly turn for McIlroy, as a freak ankle ligament injury picked up playing football before the Open meant he was unable to defend his title. He’s never won a major since.

Exuding confidence coming into this event, he underlined his intent to end the drought with a performance that showcased the marked improvements in his short game. His chipping, always an underrated weapon in his armoury, was right on point, and his putting was positively spectacular on these subtly treacherous greens.

It all began at the opening hole, where he looked sheepish as a putt from all of 60 feet dropped into the hole for a bonus birdie.

So began a run of six single-putts on the first seven greens, a staggering statistic on these surfaces. It took him to four under par and just the start he would have been looking for. 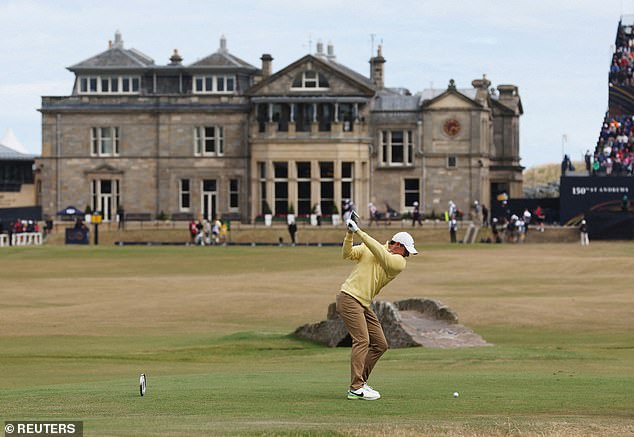 He would have been disappointed at failing to birdie either of the easy par fours, the ninth and the 10th, at the far end of the course. He got back on track by driving the par four 12th, where his eagle putt struck the hole forcefully but stayed out.

His one dropped shot at the par four 13th was actually a good bogey, given he was 80 feet away in three shots, on one of those holes playing downwind with the flag placed just over a bunker.

The closing holes offered a perfect example of what McIlroy meant in terms of being fiddly. The par five 14th measures over 600 yards but required no more than a drive and wedge for him — and he still couldn’t hit a green that was teak firm.

Similarly the 17th. ‘My drive finished just 85 yards from the putting surface and I knew I would be struggling for a par,’ he said. So it proved. On both occasions his lag putting saved him. He then drove the par four 18th with a long iron to set up his seventh birdie and a rousing end to a most encouraging 18 holes.