Two weeks after winning a gold medal at the Tokyo Olympics, the top-ranked Korda began her bid for a second major title in two months by shooting five-under 67 to share the first-round lead at the Women’s British Open on Thursday.

Nelly Korda lines up a putt in the first round of the Women’s British Open.Credit:Getty Images

Korda had eight birdies in a round that also contained three bogeys in overcast, chilly but largely wind-free conditions over the links in eastern Scotland. She was later joined on five under by Sweden’s Madelene Sagstrom, who has never recorded a top-10 finish at a major, and South Korea’s Sei Young Kim, a major champion last year and the No.4.

Australian Minjee Lee, who broke through for her maiden major title in a dramatic play-off win in the Evian Championship last month, had a strong start with three birdies in the first seven holes, but it unravelled in a three-hole patch when she had two bogeys and a double bogey, which she later described as “a bloop”.

The 25-year-old from Perth then recovered with a birdie and an eagle, in a round of one-under 71 that she said was “eventful”. Compatriot Su Oh joined Lee at one under, Katherine Kirk and Steph Kyriacou were even, former major winner Hannah Green and Whitney Hillier were at one over, while Australian amateur Kirsten Rudgeley was in last spot at 14 over.

The 23-year-old Korda is the new superstar of women’s golf, having climbed to No.1 by winning the PGA Championship in June and followed that up by winning the Olympic golf tournament in Tokyo this month. The American has four wins in 14 events in 2021 and said she has a “target on my back” for the last of the five majors. 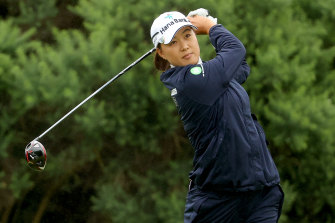 It was an up and down day for Minjee Lee in the opening round of the Women’s British Open.Credit:Getty Images

“I try to take the mindset of every day’s a new day,” said Korda, who is a combined 87 under par for her last 21 rounds. “It doesn’t matter what my ranking is. Everyone’s going into this event prepared and wanting to win.

“That’s kind of like the mindset that I try to take into every event.”

Korda has been on the road for six weeks, because of her appearances at the Evian Championship in France — the fourth major of the year, where she placed 19th — and then the Olympics, where she had a one-shot victory.

Kim is in the mix at another major having won one for the first time at the PGA Championship last year. She also finished third at the ANA Inspiration in April.