Nelly Korda produced an astonishing six-birdie finish to surge into the halfway lead at the KPMG Women’s PGA Championship in Atlanta.

Korda was already three under for her second round after 12 holes before powering into the lead in spectacular style, her birdie at the fourth starting a run of six in a row which added up to a 63 and one stroke ahead of overnight leader Lizette Salas.

Charley Hull suffered with an errant driver over the second half of her round but managed a birdie, birdie finish to salvage a 71 which sees her head into the weekend six shots off the pace, while her fellow Solheim Cup stars Celine Boutier and Madelene Sagstrom are in excellent positions after 36 holes.

But Korda stole the headlines after her remarkable recovery from a bogey at her opening hole which could have had her thinking more about surviving the cut rather than mounting a serious challenge for the lead.

The world No 2, and pre-tournament favourite after landing her second LPGA Tour title of the season at last week’s Meijer LPGA Classic, birdied 11, 14 and 17 and picked up another at the second before producing her grandstand finish. 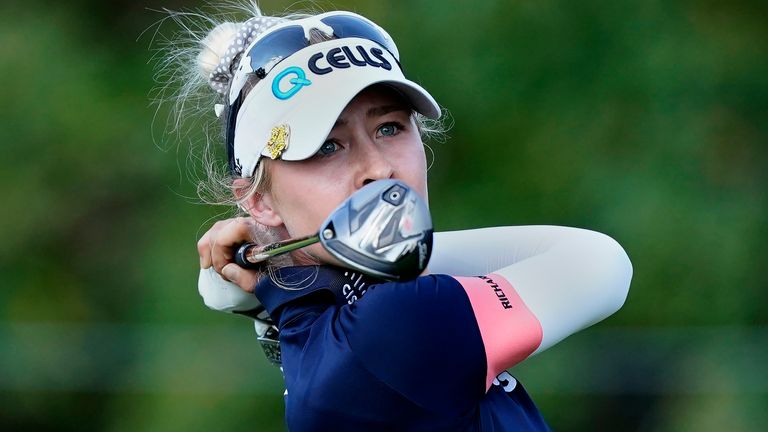 Korda’s run started with a 20-foot putt for a two at the fourth, and she came within a couple of inches of hitting the hole with her tee shot to the short seventh as her six-birdie salvo propelled her into the outright lead on 11 under par.

“I guess I just blacked out,” said Korda when asked what inspired her to put together such a high-quality round. “On the fourth I hit an arrow at the pin, flew it by a little, probably had like 20 feet and just crept in from the side on the left.

“The next hole I had a seven-wood in and actually lipped out for eagle there, then I hit it on the green with my seven-wood and also missed my eagle putt.

“Then I hit a five-iron into seventh and it was pretty close. I had probably five feet downhill, rolled that one in, and I had a long one on the next green – I don’t even know how far that was! Then on the last hole, that was a controlled pitching wedge, and I just hit it over the pin. Probably had an eight-footer down the hill left to right.

“It’s nice when you’re on top of your game and everything is going well, but you also have the roller coasters!”

Salas appeared destined for the halfway lead when she carded three straight birdies around the turn to get to 10 under, but she closed with eight consecutive pars to return a bogey-free 67 which was enough to secure a place in Saturday’s final group with Korda. 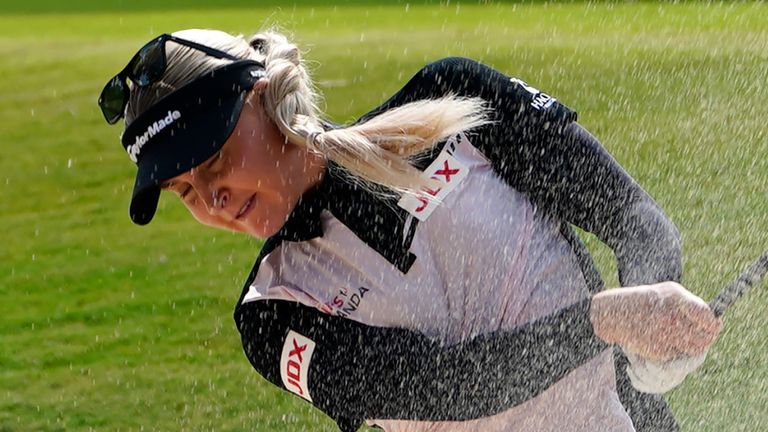 Boutier shaved nine shots off her opening 73 as the French star made seven birdies and an eagle at the sixth before dropping her only shot of a superb day at the eighth to slip to seven under alongside Cydney Clanton and Alena Sharp.

Sagstrom is at six under after handing in a five-birdie 68, while former world No 1 Inbee Park, winner of the Women’s PGA in three consecutive years from 2013 to 2015, will be hopeful of challenging for a fourth title after a 68 lifted her to five under with Hull and Germany’s Esther Henseleit (68).

Hull was just one off the lead following her opening 68, but bogeys at 14 and 16 left her at one over for the day until she got back into red numbers with birdies at the final two holes, including a stunning tee shot to three feet at the 17th.

“I felt like I played pretty good on the front nine, but my driver wasn’t behaving on the back nine,” said the 25-year-old. “But I’m going to go out and work on it in a bit. I feel like I finished with two good birdies, so it’s some momentum for the weekend.

Korda’s playing partner Georgia Hall matched four of the American’s birdies on the front nine as she rebounded from her opening 75 with an impressive 67 which lifted her to two under along with Ireland’s Leona Maguire, runner-up to Korda last week.

Lydia Ko could not keep pace with Korda and Hall as the New Zealander heads into the second half of the tournament with 11 shots to make up after back-to-back 72s, while Michelle Wie West delighted her legion of fans as she followed up a 77 with a valiant 69 to make the cut with nothing to spare on two over par.