History took less than a week to repeat for Australia’s Olympic golfing hopes, with Hannah Green making a stirring charge in the final round before, like Cameron Smith, faltering at the last hole and finishing just outside the medals. History repeated for the USA, too, with Nelly Korda replicating Xander Schauffele’s victory to take the gold medal.

Green, who started the day at 10-under par, five shots behind Korda, was flat for the front nine, dropping one stroke to par. But at the turn, the field suddenly picked up two shots on Korda, who twice left her chip short onto the seventh green and double-bogeyed to turn an apparent procession into a dogfight.

Hannah Green had a surge up the leaderboard in the middle of her round but it wasn’t enough to put her on the podium.Credit:AP

Green and her playing partner Mone Inami, of Japan, were galvanised at that point, going on a birdie binge as the leaderboard became a lot more interesting. Green rolled in a five-metre putt on the par 3 tenth, and needed just five putts over holes 12 to 16 as she closed in on the bronze medal position.

Inami, meanwhile, climbed into a tie with Korda.

The buzz was killed, somewhat, when officials called a weather delay when the six players in the two final groups were all on or around the green of the short par-4 17th.

Alarmist weather forecasts had already brought forward the final day’s play by two hours and had prompted warnings that round four might need to be cancelled altogether. With only 15 or 20 minutes left for play, officials from golf’s ruling body blew the hooter and brought the players in.

Green, who had been on an adrenalin high, was left with 35 minutes to think about the four-metre birdie putt she had waiting on 17. With no actual bad weather arriving, save for a few minutes of rain and wind, she was able to practise on the putting green, but she said later that the break sucked her energy away.

“I had a little bit of lunch, then rolled a few putts downhill because that was the one waiting for me,” Green said. “I don’t know if it was beneficial for me or not. 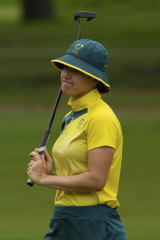 Hannah Green after missing an important putt on the 17th.Credit:AP

“It was hard to pump myself up again. I was on cloud nine for those previous five holes, so it was definitely hard to go in and rest and come back out again. I had such good momentum, the delay stopped that.”

On the resumption, Green studied the putt on 17.

“It was probably the only putt today where I wasn’t sure of the read,” she said. “I called my caddie in, which I don’t normally do unless I’m confused. I didn’t put my best stroke on it. I felt like if I didn’t have the delay, I could have holed it.”

She missed the putt and, like Smith last Sunday, made bogey on 18.

“To be even in contention over the last holes, I was proud of myself,” she said. “I felt like with nine holes to go, I was nowhere near in it.”

Local favourite Inami, meanwhile, benefited from Green’s miss to read the line perfectly on a similar putt on 17 and went into a share of the lead. But on the 18th, after driving into the middle of the fairway, Inami’s approach with a hybrid found a poor lie in the front greenside bunker and her failure to get up and down cost her a tie with Korda.

Korda, the daughter of retired Czech tennis star Petr Korda, cemented her status as the world’s best female golfer and won family bragging rights over her sister Jessica, who finished back in the field at 9-under. Australia’s Minjee Lee was unable to reproduce her major-winning form from two weeks ago and ended up in a tie for 29 th place at 4-under par.