Never mind magic Monday. This ought to go down in golf history as Maguire Monday. Led by the astonishing Leona Maguire and the greatest rookie performance of all time by any man or woman, Europe won the Solheim Cup for only the second time on American soil.

The record books fell open for Europe’s warriors and its magnificent captain Catriona Matthew, as the Scot became the first woman skipper to be victorious on two occasions. But there was no disputing the star of this nerve-shredding show at the Inverness Club in Toledo, Ohio, even if the modest Maguire would rather let her clubs do all the talking.

The first Irish player ever to compete in the Solheim Cup, she’ll be a superstar back home after this. Truly, we’ve literally never seen anything like it.

It’s rare enough for a debutant to play five matches, let alone give up just a half-point over the whirlwind three days. But the nerveless 26 year old from Cavan looked as fresh as she had on the first tee on Saturday morning as she took on the best rookie in the American team and simply wiped the fairways with her. Or rather the greens.

You think Patrick Cantlay is a good putter in the men’s game? Maguire would certainly give him a contest. The abiding memory of her singles match, at least on the front nine, was poor Jennifer Kupcho picking up her ball marker because Maguire had rolled in yet another putt.

How do you take on a player who stands over 20 footers and holes nearly all of them? Each was greeted with a little fist pump as her lead grew larger and larger. After seven holes on the demanding Inverness course in Toledo, Ohio she was a scarcely believable five under par, four up and already out of sight. ‘Any chance Padraig could pick her for the Ryder Cup?’ asked a cheeky admirer on Twitter. The final margin of victory as she appropriately put the first singles point on the board for Europe was five and four. She never lost a single hole. 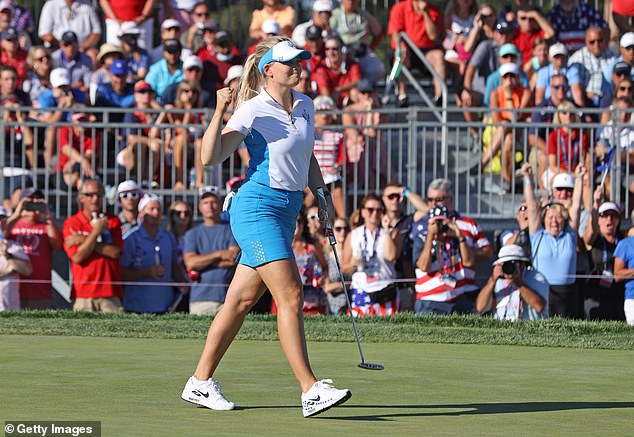 ‘I couldn’t have asked for a better week, it’s just been brilliant for me from start to finish,’ said Maguire. ‘I didn’t look at a leaderboard out there, I was just determined to get my point.’ The previous best rookie display by either a man or woman was Belgian Thomas Pieters who claimed four points out of five in the 2016 Ryder Cup. American Paula Creamer held the Solheim record with 3.5 points out of five in 2005. Maguire, with 4.5 points, has certainly raised the standard all right.

The only sadness was that, other than her twin sister Lisa – who looked every bit as good growing up before settling for a golf management role, owing to a lack of distance off the tee – her extended family were not there to witness it, owing to the Covid restrictions. Not to mention the thousands of Irish fans who had dearly wanted to be there in person to watch the first player from the Emerald Isle to play in the Solheim Cup. At least the clubhouses all over Ireland must have been doing an unusually roaring Monday trade.

There were other heroes, of course, not least another rookie, Matilda Castren from Finland, who didn’t exactly waltz to victory but holed a wonderful 12ft putt on the 18th to beat gutsy Lizette Salas and repel an American fightback spearheaded by Nelly Korda, who showed the pride of a world number one to beat Georgia Hall.

That took Europe to 14 points to retain the cup and the half-point they needed to win the trophy was guaranteed with Emily Pedersen three up with three to play against Danielle Kang. Pedersen’s boyfriend Olly Brett, would you believe, was Kang’s caddie. Good luck with that situation, Olly.

Matthew opted for Swedish cool at the top of her singles order, with Open Champion Anna Nordqvist and Madelene Sagstrom out first and second. 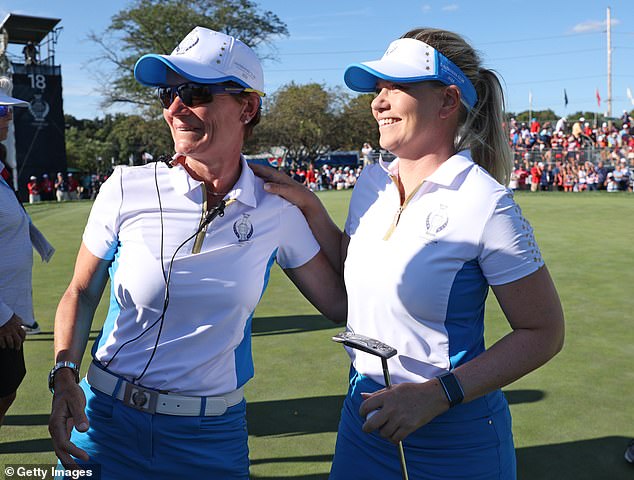 The former was up against Lexi Thompson in a repeat of their match in 2017, when they shared 11 birdies and an eagle in what is widely considered the best Solheim singles of all time. It was hardly surprising that both players requested an encore, and the two captains duly obliged.

Trailing by two points going into the final series, this was a game the Americans had to win. As it turned out, it might not have had quite the majesty of their match four years earlier but it was still a riveting spectacle of nip and tuck.

Thompson came back from four down for a half-point in 2017 but the mighty Nordqvist is now the Open Champion and arguably the best iron player in the women’s game. All square with four holes to play, Nordqvist delivered one more immaculate approach to sneak ahead with a birdie at the 15th.

Back came Thompson with a birdie at the 16th. In the end, it finished with a half-point each once more for these two valiant warriors – and that was fine by Europe.

Without a point to her name, it was a gutsy call from Matthew to place such faith in Sagstrom near the top of the order. Typical Matthew, it proved another great call as she won.

Tense moments still lay ahead but a giddy victory for Europe would finally be confirmed on magic, Maguire Monday.