But the opportunity to fight for a world title never came for Dave Sands, a proud Dunghutti man. Aged just 26, he died in a truck accident in Dungog, in northern NSW, on August 11, 1952 – cutting short a career that was on course for legendary status.

Dave Sands knocks out Henry Brimm at Sydney Stadium in 1950. He was ranked number two for Jake LaMotta’s world middleweight title at the time of his death.Credit:Kenneth Issitt

With the passing of the years since his death, his memory has slipped deeper into the recesses of Australian sport’s collective consciousness.

His family and followers, however, have fought to keep his name and his legacy alive. And on Thursday, that flickering flame burned bright with the presentation of a replica belt – sent in recognition of Sands’ accomplishments by the Commonwealth Boxing Council, and identical to the British Empire middleweight title Sands held from 1949 until his death – to his family at NSW Parliament House.

Champions back then were usually given their own belt to keep. For whatever reason, Sands never got one – but 73 years later, a historical wrong has finally been put right.

“Having the belt, it represents an achievement by a proud Aboriginal man,” Sands’ grandson, Chad Ritchie, said. “This is something we can put into a museum or show people – these are the kind of things you can achieve if you put your mind to it. It will live on for generations. 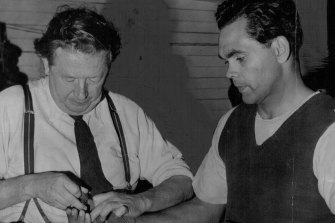 Trainer Tom Maguire adjusts Dave Sands’ tapes before a workout at Newcastle prior to the Stadium bout with American Henry Brimm, August 3, 1950.

“I’ve always tried to keep his memory alive, pass his story on because Dave was one of the first true sporting heroes who went abroad to chase glory. He gave people, especially the working class, a reason to believe and hope back in those days when times were tough. And the younger generations need to know this.”

The man responsible for the provenance of the belt is Phillip Dotti, Sands’ nephew and a former rugby league winger who played seven games for Cronulla under Jack Gibson in 1986. He grew up in Burnt Bridge, the same Aboriginal reserve just outside Kempsey where the Sands family came from.

Dotti fondly remembers sitting on a log as a child and listening to elders tell stories about the ‘Fighting Sands’: six boys, all of whom were gifted with supreme natural boxing talent, and who would become one of Australia’s most famous sporting families throughout the 1940s, fighting over 400 times in total. (Their actual surname was Ritchie, but they took on the name Sands as a nod to ‘Snowy’ Sands, a railway guard in Newcastle and boxing fan who would help the brothers Clem, Ritchie, George, Dave, Alfie and Russell travel for fights in Sydney fare-free.) 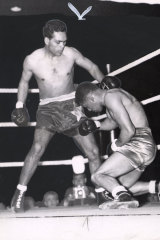 Dave Sands drops Dick Turpin during their bout in London.Credit:AP

Dave, though, was the clear pick of the lot. He went on to become one of just a few Australian fighters to hold three national titles at once, in the middle, light heavy and heavyweight divisions. In 1949, he destroyed Englishman Dick Turpin in under three minutes to claim the British Empire middleweight title in London. He never smoked, never drank, never did drugs, and was voted as Australia’s most popular sportsman for three consecutive years.

Quiet and reserved among strangers but a practical joker with friends and family, Sands was renown for his good looks, charisma and charity. He captured the imagination of the country – not just because of his feats in the ring, but because of who he was outside of it.

“Boxing was probably the only space that, really, Aboriginal people could get a go,” said Professor John Maynard, an Indigenous historian at the University of Newcastle. “That was the only sport that would give us a degree of a go – primarily because you could get killed in the boxing ring. None of the football codes would [at the time]. There were some rare instances, but there were very few opportunities.”

Sands made his American debut in 1951 with his second win over Carl ‘Bobo’ Olsen in Chicago, in what was also the first fight ever televised coast-to-coast in the United States. The Americans called him “the boxer with the educated left hand”.

While he always had the talent, so much of the fight game is down to luck and politics. Sands could only prove he was the best in the world if the man who held the belt agreed to fight him – and that never happened, despite becoming the number one contender to ‘Sugar Ray’ Robinson, the middleweight champion at the time and one of the best pound-for-pound fighters in history.

World Boxing magazine, in rating Sands as the 14th best fighter to never win a world title, wrote that he had been “ducked” by Robinson, Jake LaMotta and Rocky Graziano. Arrangements for Sands to fight all three of them were discussed but fell through, primarily due to reluctance on their part. Robinson apparently once said of Sands: “I’d want a lot of money to fight that guy.”

“Back in those days, the fight game was controlled by the [Italian] mob,” Dotti said. “The mob didn’t want Ray Robinson or Jake LaMotta going outside America because Dave Sands was the bloke who was going to nail them.”

When ‘Bobo’ Olsen beat Paddy Young to win the middleweight title vacated by Robinson’s retirement in 1952, he told the crowd at Madison Square Garden words to the effect of: “If Dave Sands was alive, this title would have belonged to him.”

The great irony is that when Sands passed – on his seventh wedding anniversary, no less – he actually was training for a world title fight, against Randy Turpin. That offer was cabled to Sands from English promoter Jack Solomons, and marked private and confidential amid rumours of Robinson’s impending retirement, but was tragically never fulfilled.

Sands has a plaque in his honour on the corner of Glebe Point Rd and Parramatta Rd in Sydney, which was unveiled shortly after his death. In 2015, a laneway in nearby Glebe was named after him, close to the gym where Sands would train whenever he was in Sydney, usually attracting crowds of onlookers so large they would stop traffic.

There are a few other monuments scattered across the Newcastle region, and Sands was inducted into the World Boxing Hall of Fame in 1998, but Dotti has always been galled by the absence of any sort of memorial for Sands in Kempsey, and the lack of proper recognition for and wider knowledge of his achievements in Australia.

He fired off some emails to the local council, outlining the case for a statue of Sands, but they fell on deaf ears. Undeterred, he sent another to the Commonwealth Boxing Council, who were only too happy to send out a replica belt and a certificate to appropriately honour Sands.

“Sometimes we forget where we come from,” Dotti said. “Well, I don’t.”