World champion boxer Sunny Edwards taught an internet troll a valuable lesson in why they should not abuse athletes on social media — by flooring the keyboard warrior in a real-life duel. The unknown man lasted just two rounds and looked visibly exhausted after going toe-to-toe with professional fighter Edwards.

The IBF world champion, ranked as the number one flyweight boxer in the world and is widely regarded as one of the best pound-for-pound fighters alive, responded on his official Twitter account after receiving comments from a user, who goes by the name of ‘Fab Tanga’. Trolling has unfortunately become part and parcel on social media, with unknown accounts often posting hateful messages and abuse online knowing they cannot face prosecution without proper forms of identification.

But Tanga made the mistake of rubbing up Edwards the wrong way after the pair became embroiled in a war of words on the social media platform — prompting the London-born pro boxer to use his fists to do the talking. Given that he had won all 18 fights in his career so far, there was clearly no contest in who would win the fight. The only issue for Edwards was getting the troll to turn up as the Twitter argument between the pair gathered attention on Friday.

The user challenged the boxer to a duel at his gym after engaging in a bizarre argument about Leeds United on Twitter. He wrote: “I am coming … I am no the way to the train station..you pick the wrong citizen @sunnyedwards,” he wrote. “Today … I WILL SHOCK THE WORLD.”

Edwards then responded with a quote tweet to his followers, asking someone to “watch my kids whilst I fight this man”. Tanga then uploaded a picture supposedly of himself in front of Edwards’ gym to prove he wasn’t going to pull a no-show. And that only confirmed for Edwards that the fight was on as he declared: “I’m coming to get you and we going gym.”

Hours later, Edwards uploaded a video with no sound, which appeared to rattle his opponent as he wrote: “Bro… no audio… leave it… I am so upset now and I for sure don’t fight against a man with his children with him… take care of yourself, thank you for let me dream for a second… f [this] s* world.”

But a determined Edwards refused to let it go, repeatedly asking for his whereabouts before warning: “Swear to god if I get to the gym and @ft90734510 isn’t there I’m heading train station”.

Once it had emerged that the troll was on his way, the fight was held at Edwards’ gym and some attendees even live-tweeted the amateur bout to the captivated audience, with the hashtag ‘#EdwardsTanga’ trending on Twitter. 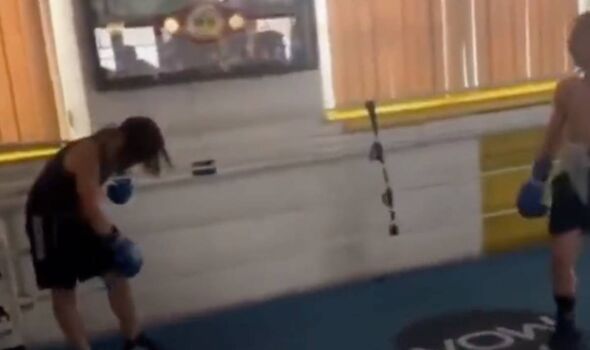 But pictures soon emerged on social media of the clear winner — and to no one’s surprise, it wasn’t the troll who prevailed. Video showed Edwards battering the troll around the ring and dancing to dodge his punches with immense ease and making the unknown man look like a fool.

The worn out man – who travelled 200 miles to Edwards’ gym in Sheffield to fight him – was pictured hanging over the ropes in footage uploaded to Instagram after the first round. And it was all over after shortly after in round two, with Edwards proving that words are not enough ammunition to use against the fists of a world-renowned professional boxer.

It appears the two made up afterwards, however, as Edwards posted a picture of the pair embracing after the fight with the caption “The champ”.

Related posts:
Previous Post: 'I want to stay': Neymar has no intention of leaving PSG this summer
Next Post: Frenkie de Jong is not the only man who can fix Man United midfield…