Tyson Fury’s dad John commended his son’s performance against Deontay Wilder last month as a ‘masterclass’ and ‘the best thing I’ve seen in my life’ during a phone call the two shared after the fight. Fury won the WBC and Ring Magazine belt off Wilder.

Fury dominated Wilder for seven rounds and knocked him down twice en route to a TKO win after the Bronze Bomber’s corner threw the towel in.

Fury was then filmed having a phone conversation with his dad in the changing rooms after.

Fury Sr couldn’t attend the event as he isn’t allowed into the United States because of a previous conviction.

He watched the fight in the dressing room at York Hall, where he’d covered a Frank Warren fight card for BT Sport earlier in the evening.

Tyson and his dad’s recorded exchange has been shared thousands of times on Twitter by boxing fans.

Tyson Fury explains why Anthony Joshua is not a real champion

And Tyson replied: “I was too strong for him, dad. I was 40lbs heavier than him.”

“What a masterclass,” Fury Sr said.

Tyson then commented on the fact that most doubted the 273lbs he came in at on the day before the fight.

“Everyone was thinking, what’s he doing at this high weight, I was 19st 4lbs tonight… solid. Did it look good on the telly?” 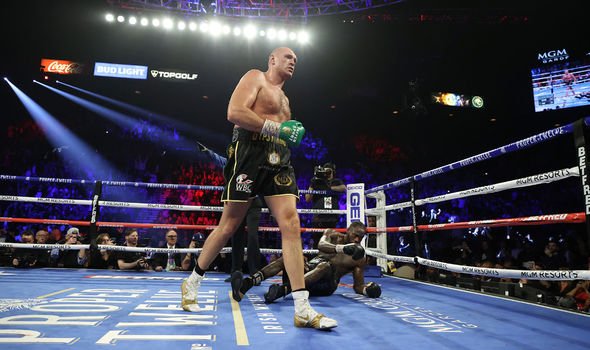 To which Fury Sr replied: “It was the best I’ve ever seen in my life, you couldn’t with it, you’ve done it.

“You’ve equalled Muhammad Ali’s achievements, but let me tell you son, it was some performance, I’m still shaking.

“Listen, take care, love you on, well done.  take the best of care, god bless you, thank you.”

Fury Sr predicted before the bout that his son would stop Wilder, who was previously undefeated.

Fury and Wilder will clash in a trilogy bout in the summer, with the MGM Grand Garden Arena in Las Vegas likely to host again.