Birmingham’s Breese is set to take on Brazilian Antonio Arroyo at UFC Vegas 28, which takes place Saturday at the UFC Apex in Las Vegas.

And after enduring a personal nightmare on “UFC Fight Island” in Abu Dhabi last time out, he’s chasing an eye-catching display as he looks to bounce back into the win column.

Breese ended a two-year layoff in February 2020 in a bout that saw him lose out to American prospect Brendan Allen, but he bounced back in style with a “Performance of the Night” bonus-winning victory over KB Bhullar in Abu Dhabi last October.

Breese’s victory saw him earn a second trip to Abu Dhabi to face ranked opposition in the form of Russia’s Omari Akhmedov.

But his second stay in the COVID-secure bubble proved a nightmare, as the W Hotel became Breese’s Hotel California.

“They locked me up in a hotel room for a whole week before the fight,” he told Express Sport.

“I was in solitary confinement. I wasn’t even allowed out of my hotel room.

“In the first round, Akhmedov is on top of me, smashing my face in, and I’m cramping in my hamstrings.

“There are things I’m still learning and figuring out, but it doesn’t help when the Abu Dhabi government are messing me around for a whole week ahead of the fight.

“They’re waking me up at stupid times to test me. It’s ridiculous, to be honest.

“When you’re locked in a hotel room – the same room – you can’t even sleep. It’s solitary confinement. 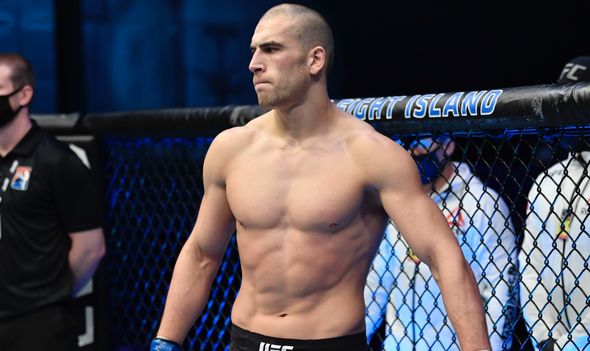 “I’m not allowed anyone in. I got people knocking on my door at stupid times. They even sent one of my head coaches home.

“He had one positive test, then they sent him to another hotel and had two negative tests and they were like, ‘We don’t want him here anyway.’

“It’s ridiculous, and it really messed me about before the fight.”

Thankfully for Breese and his team, things appear to be going much more smoothly ahead of this weekend’s bout with Arroyo.

The team are in the UFC’s bubble in Las Vegas ahead of the bout at the organisation’s purpose-built UFC Apex facility, which has become the home of the UFC’s fight night shows during the pandemic.

And, with Breese much more relaxed in his surroundings ahead of fight night, the Brummie also said that he’s feeling the benefits of having competed three times in the space of 12 months as he heads into the weekend feeling sharp.

“Definitely, things are good,” he said.

“I got here early to acclimatise. I’m here ready to rumble, man.

“I feel so good, just through this recent activity, even though not all of the results have gone my way.

“Just getting in there and competing is starting to get very comfortable for me.

“I can feel the UFC is trying to push me (toward bigger fights), but that’s because they know I come to rumble, man.

“I don’t come in there to pitter-patter – I come to finish, and I come in prepared and I look to finish every fight that I’m in.”

The unassuming Englishman, who has been tipped as a potential contender in the UFC – first as a welterweight, and now as a middleweight – says he’s ready to deliver a knockout performance on fight night to get back to winning ways and push him back into a fight with ranked opposition later in the year.

“From what I’ve seen he’s more a guy that likes to use kicks from distance,” he said, as he broke down Arroyo’s fighting style.

“I know he trains at (famed Albuquerque gym) Jackson-Wink, so you’ve got to expect a good, well-rounded game.

“He likes to strike from range, but when I exert my forward pressure and once start cracking him, he might change his mind about striking.

“To be honest, every fight I’ll always look to strike. It’s usually the other guys who are looking for the grappling exchanges.

“But at the same time this is mixed martial arts, and I train in all areas.

“But for me, I’m always going to come in looking for the knockout. That’s the game I’m gonna play.

“The game is: Get the knockout.”