Tyson Fury’s promoter Bob Arum says he is not willing to do the Gypsy King’s third fight with Deontay Wilder behind closed doors, because they would be losing too much money. Fury knocked Wilder out in the seventh round of their world title fight in February.

Wilder activated his rematch clause with Fury almost immediately and the pair were due to fight again on July 18.

But Arum pushed the date back until at least October because of the coronavirus pandemic.

Arum is hopeful that the fight can take place by then, but he doesn’t want to rush into it without any fans, like he’s planning to do with his smaller shows.

“It’s one thing to take events that were done with two or three thousand people and now do them without a crowd,” he told Top Rank’s YouTube.

“It’s not nearly as egregious as doing Fury vs Wilder without fans, when the fans in the last fight put in almost $17million by purchasing tickets.

“How do you replace that? You don’t, you can’t.

Boxing news: Anthony Joshua the ‘only’ fighter who can beat Fury

“A Fury vs Wilder fight would have to wait until we can get a full crowd.

“A sport like boxing for big events where the gate money is a big percentage of the revenue, I don’t see how you could do it without spectators.”

British promoter Eddie Hearn is equally reluctant about doing Anthony Joshua vs Kubrat Pulev behind closed doors, but he’s admitted it may have to happen in order to not stall AJ’s career.

Arum questioned whether Hearn could afford to do so. 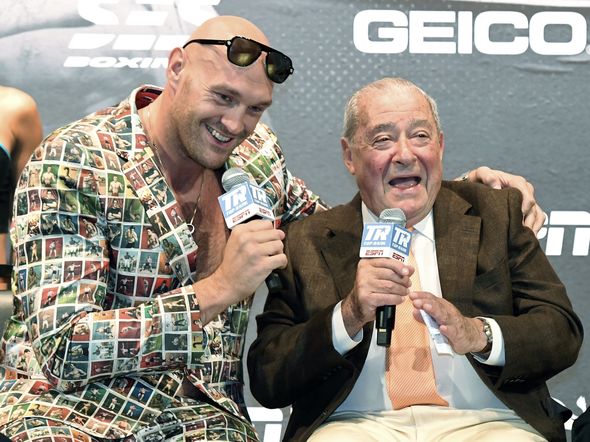 Arum also mentioned just how soon he wanted to get back to running shows again, highlighting early June as his target.

“Our plans, being realistic, are to be operational by the beginning of June,” the 88-year-old said.

“We’re going to get a secure facility in California, Nevada or Texas and work with the commissions so we can put fights on for ESPN on a regular basis.

“We could do it two or three times a week without spectators.”