Tyson Fury has confirmed plans to retire from boxing after his next two fights. Deontay Wilder has triggered a trilogy bout which is expected to take place this summer.

If the Gypsy King comes through that battle with his WBC heavyweight belt in tact he hopes to have a gigantic unification showdown with Anthony Joshua.

He must fend off the American once more in Las Vegas later this year before setting his sights on a Battle of Britain.

Joshua will step into the ring against mandatory challenger Kubrat Pulev on June 20 and can then begin negotiation with Fury – which will be the 34-year-old’s final hoorah.

“I’ve got two more fights left and then we’ll really think about what we’re doing and go from there,” Fury said on This Morning.

Fury’s wife Paris admitted after the second fight with Wilder than she wanted her husband to retire,

“I’d like him to beat Anthony Joshua and then stop,” Paris told the Mirror.

“He’s in the ring with supreme boxers and it is a dangerous sport. We both know the risks. I know one shot can change everything.”

The biggest danger in a trilogy fight with Wilder is the former champion will be a wounded animal with little to lose.

But Fury is still confident he can dominate the showdown just as he has in their previous two fights.

“He’s a very worthy opponent. He’s a very dangerous opponent and he has the eraser knockout. 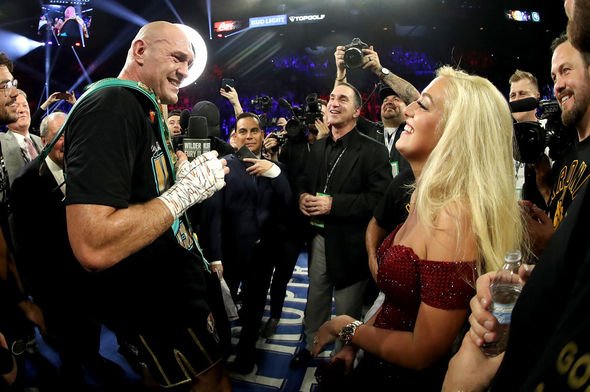 “You’re only one mistake away from disaster, you have to be switched on for all 12 rounds.”

Paris also revealed the emotions she goes through when watching her husband ply his trade.

“It’s horrible to watch, it’s not a pleasant thing,” she explained.

“I’m sitting there trying to take every punch and dodge every punch with him so I don’t look very elegant when I’m there neither but it’s a hard thing to watch, it’s not nice to be there.

“But you’ve got to feel like you’re there to support.”